We are in perfect vacation weather. At times there is hardly a cloud in the sky, the sea is deep blue and the temperature is made pleasant by the wind on deck. That also makes it dangerous as with the breeze you do not feel the sun burning on your skin and then it goes wrong quickly. Hence the captain keeps hammering on ‘sunblock, sunblock” during the Voice from the Bridge. We will find out tomorrow how many did not listen. My experience is that there will be quite a few. Some because they do not listen or believe anything, some because they know what they can take at home and do not realize that the sun is slightly different in intensity over here than at home. And to my utter amazement they are not always first time cruisers.  Today I also found out that we have a beach on board. I do not know where, but through the corridor marched this morning a child of 3 or 4 with spade and bucket on his way to the beach. He is a day early, but that did not deter him, he was on his way.  Tomorrow we are in St. Maarten and there is even a nice beach next to the dock so he will not have to go far. 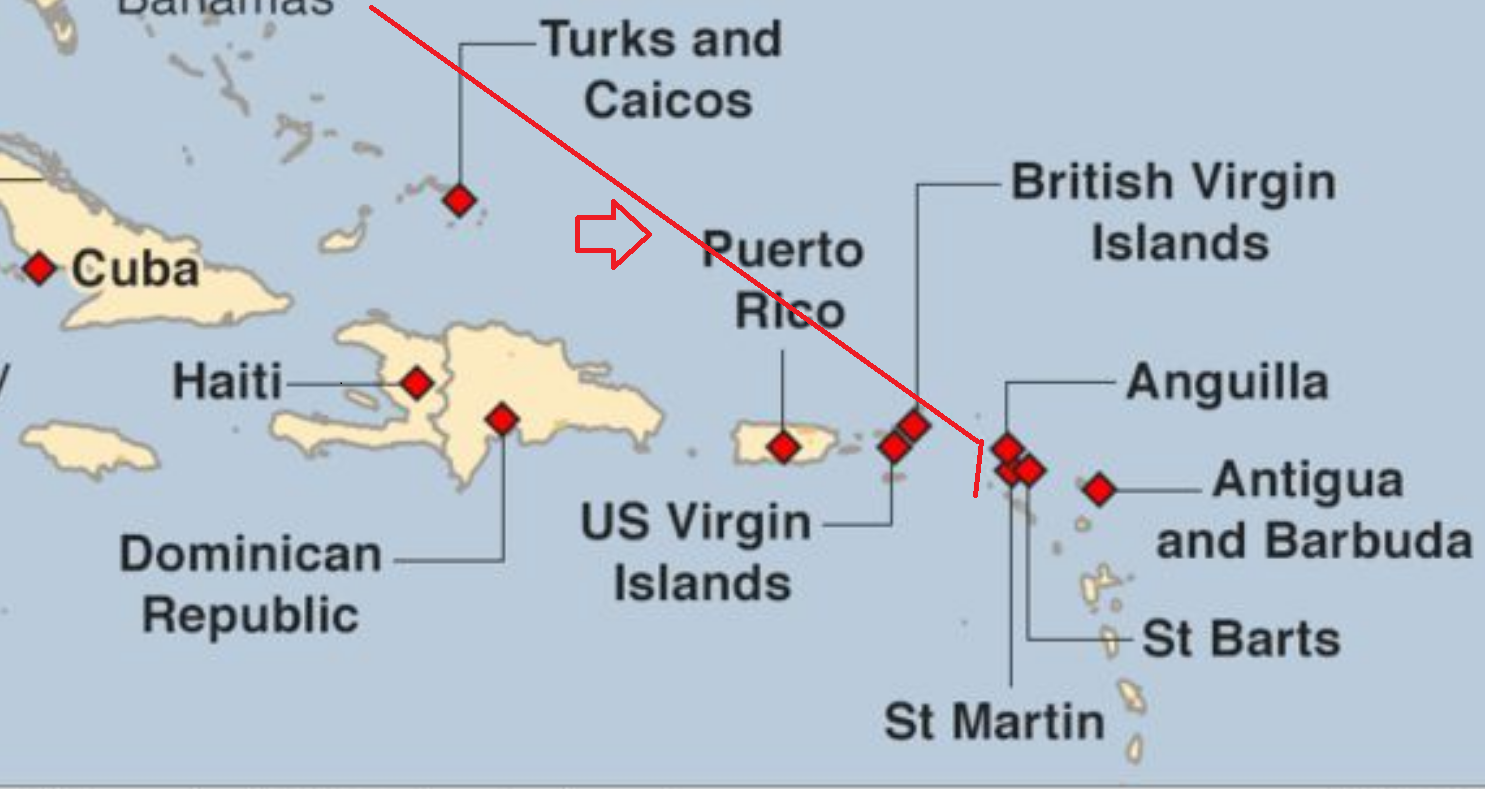 Our approach to St. Maarten. If the captain had decided to go north of Cuba (see routes yesterday) then he would have gone through the Virgin Passage and sail under the US Virgin Islands to get away from the wobbly weather,

Which entrance you take depends on a number of factors. As it is good weather we will go through the Anagada Passage, at least the northern part which is called the Sombrero Passage. (After a tiny rock pinnacle north of St. Martin) that is the French side of St. Maarten where they do not speak Dutch which looks like a Mexican hat. But if the weather is very bad, then the captain can decide to sail through the Virgin Passage and then be in the lee of all the Virgin Islands for most of the night to give the guests a more stable ship. I once sailed coming from St. Barts (to the East of St. Maarten) all the way under St.Maarten, St. Thomas, Puerto Rico and Hispaniola and then went up through the Windward Passage directly into the Old Bahama Channel.

North of St. Maarten in the Ocean was a heavy tropical storm churning that could not make up his mind whether to become a hurricane or not and was almost stationary. So instead of taking the bumpy route north of the islands, I stayed below. A considerable longer distance but a lot smoother. I then had the luck that this storm gave me a nice push in the back north of Cuba with strong winds and enhanced currents and we only arrived one hour late in Fort Lauderdale than planned. Main thing about that cruise was, was how difficult it was to convince the guests about how bad it could have been. As they had great weather. They only believed me when I started referring to CNN, and other news channels and they could see it for themselves. And as we all know, if it is on TV, it must be true, so I was saved and forgiven for being one hour late.

As we are coming in on a strange day for a cruise ship  – Saturday — which is a day when most Caribbean cruise ships have turn over day in Florida we are scheduled to be the only ship in port. So we can then normally pick the best dock. Which one that is, depends on the swell. At times a nasty ocean swell can just make it around the East Cape of St. Maarten and although the docks are in its lee, it can still make the ship ride along the pier. Not good for a steady gangway and not good for the mooring ropes. Most of the time the East Pier with a NE dock location is the best as that is the farthest away from the line of swell. Second question is, do we go nose in or nose out. Nose in reduces the distance the guests have to walk as we can then use the forward gangway. Nose out has the advantage that, if there is a swell, the bow will cut into this well and the ship will move less and when the swell catches the blunt bit of the stern and lifts it up. So we will have to see what the final decision is between captain and pilot once the ship is approaching the berth.

Weather for Philipsburg St. Maarten: Partly Cloudy 30oC / 86oF and only a light breeze. It is going to be hot in downtown.

We approach the island sedately but by plane it is much more exciting. The runway lies in  line with Maho Beach and the planes really have to touch down as soon as they can, so they fly less than 50 feet above the beach crowd while coming in. It looks as impressive from inside the plane as from the outside, as when looking out from the window you really think that you are going to hit everybody due to vertical perspective. It is not only KLM that flies to St. Maarten, but as I am Dutch I post KLM