The weather did not exactly follow what was promised as it rained considerably on arrival. A large band of rain clouds lay over the island and although the dry spells increased considerably it kept raining off and on for most of the day. I had been advised that we would be the only ship in port and also that turned out to be a schedule that was not followed. Instead of being by ourselves we had the ms Volendam in (which came early so she picked the best spot), the Seabourn Odyssey and the Adventure of the Seas. Not as busy as it can be in Philipsburg but still a nice and busy day with roughly 9000 guests in port and roughly 3000+ crew as well.  A good day for the shops and they do need the money.

In September 2017 the island was hit by two very severe hurricanes (Irma and Maria); a large number of houses lost their roofs and there was extensive damage and flooding to everything else as well. Irma was the first category 5 hurricane to hit the island in recorded history and then 2 weeks later Maria did the same thing. Those who keep statistics later advised that Irma was the 4th. costliest Atlantic hurricane recorded with a total damage price tag of $ 77.2 billion when including all the areas it crossed. 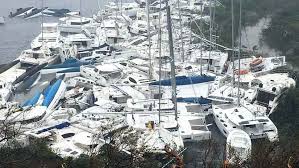 This is not the way a Marina is supposed to look like. (Photo unknown source on the internet)

The Dutch Government send troops and landing ships with material to help with the first recovery and that was later followed by police cars, fire trucks, ambulances and other infrastructure materials that needed to be replaced. Also the airport buildings were severely damaged and I remember leaving a ship here shortly after the port re-opened, and having to check in outside and then wait outside under an open tent as inside space was limited. Closer to departure I was then moved to the only inside waiting area still intact but the ice cream stand used its own little generator to ensure that there was consistent power for the Soft ice machine. Repair work is still going on but from the ship it now looks a lot better than it was. The port was closed for a prolonged period and although there was not that much damage to the piers, there was simply no way of walking into the town and even if you managed to do so, there was nothing open.

A much more upbeat story is how the split between the French and the Dutch part happened. There is no firm evidence that it really went like this but taking into account that both the French and the Dutch like a good drink and the rather erratic borderline between the two sides, I personally give it much credit. For a change the two sides were not in the mood to fight over the island as it was not so valuable in the 17th. Century, (it was more of a strategic issue) it was decided that the border would be decided between a representative of each side. Both would walk the island and then thus create the split. 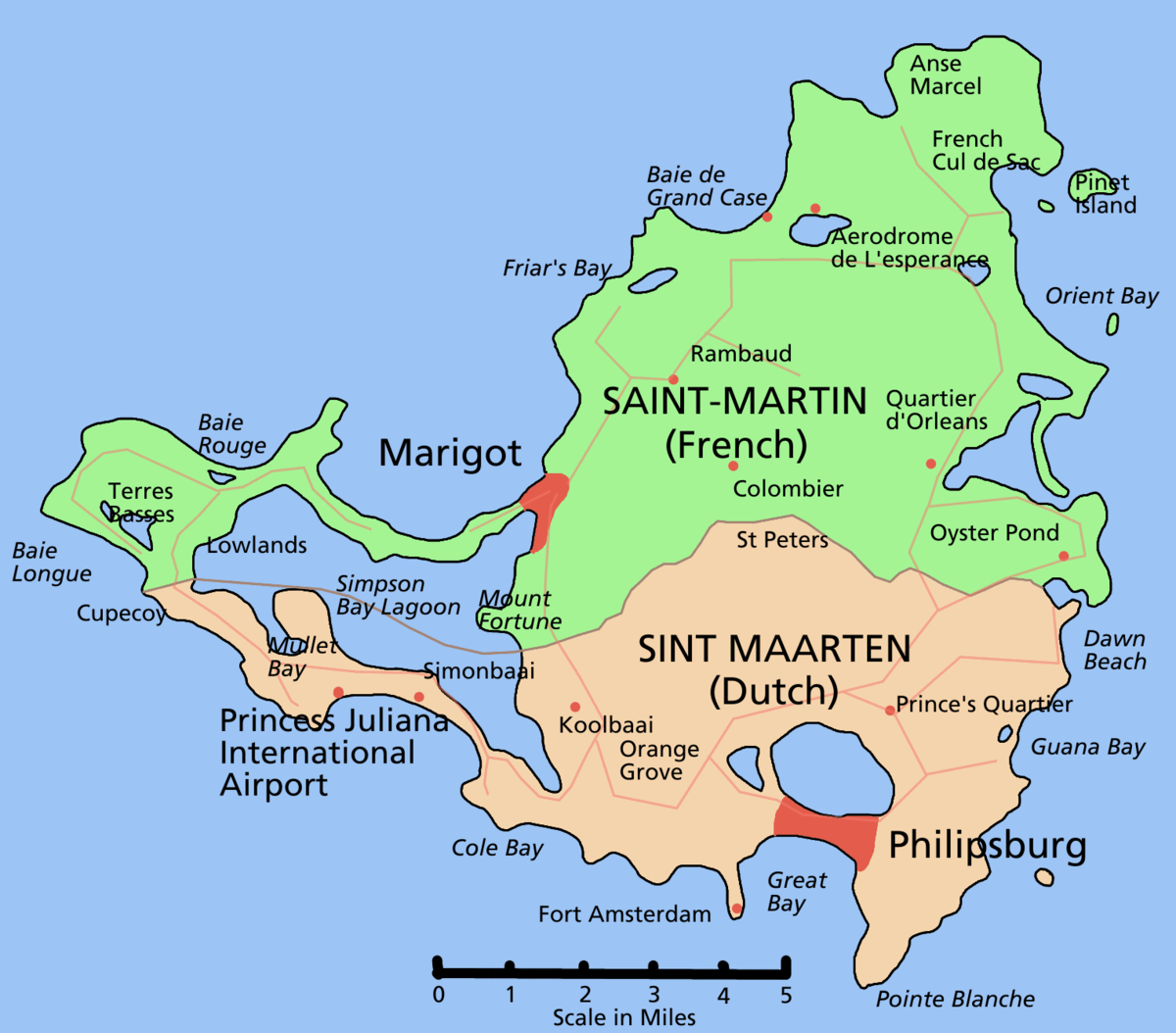 St. Maarten / St Martin. If it had been politicians then the border would have been a straight line.  Inspired by some nice drink all sorts of things can happen. (Diagram courtesy Wikipedia)

As St Maarten / St Martin (both sides even decided on keeping the same name) is not exactly flat at the eastern side and quite swampy on the western side it was not going to be an easy walk. Now the story goes that the Frenchman started his journey with a supply of wine and with an eye for the beauty of the island and the Dutchman with a supply of Gin and with an eye on making money. When they met and the dotted lines were connected, the French had the northern part, which is the nicest part and the Dutch had the bleaker part but the side where there was deep water for the ships. Hence the deep water port is at Philipsburg & protected deep water anchorages close to the beach and at the Marigot side (French main town) it is very shallow and ships have to anchor a considerable distance away in quite an exposed area. The question is now, who had the best deal: A cab driver told me long time ago, I make my money on the Dutch side and then I spend it on lunch and coffee on the French side………. 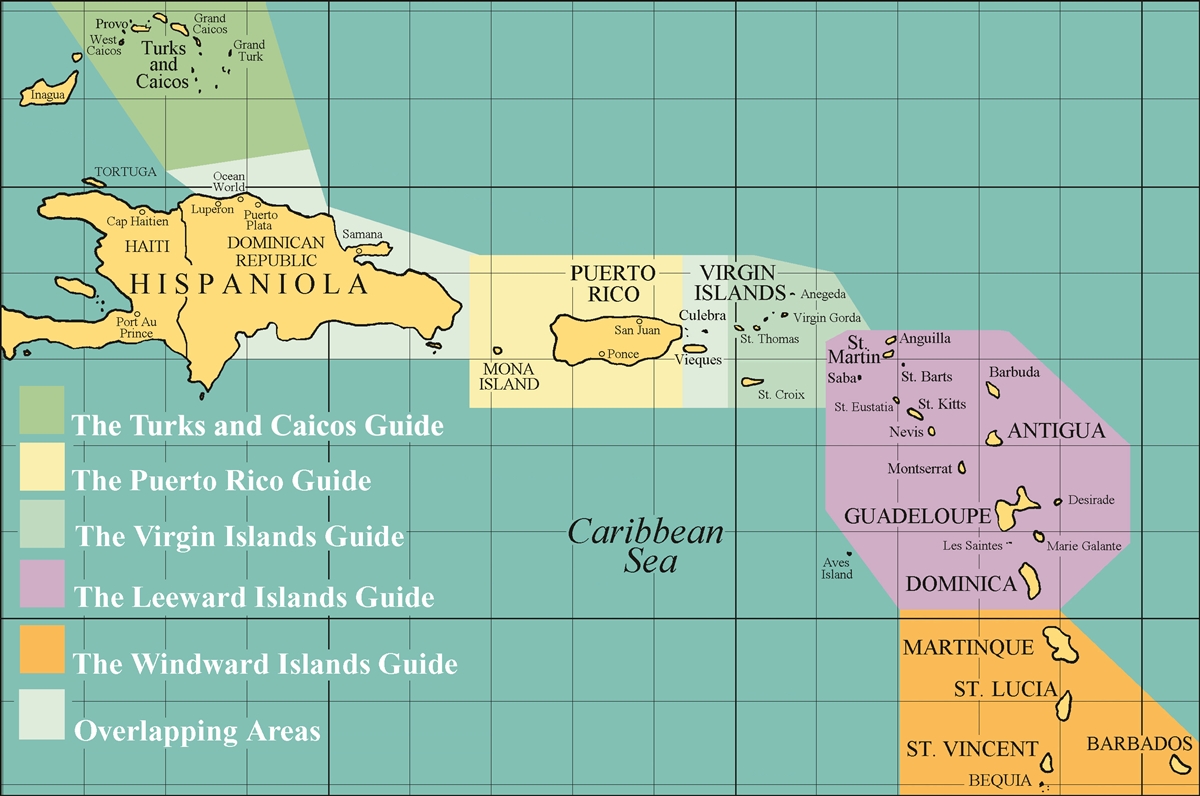 The separation of groups of islands in the Caribbean. (Diagram unknown source on the Internet)

St. Maarten is part of the Dutch Leeward Islands, consisting of St. Maarten, St. Eustatius and Saba. St. Eustatius is a small island and thus not of much interest for larger cruise ships and Saba is basically just a dormant Volcano top with three little villages on it with a total of 2000+ residents. Because of this volcano it has the highest mountain top of the Kingdom of the Netherlands with the shocking height (for Dutch standards) of 887 meters. The highest one in Holland is 312 meters in the south of the Netherlands near the Dutch/Belgium/German border. 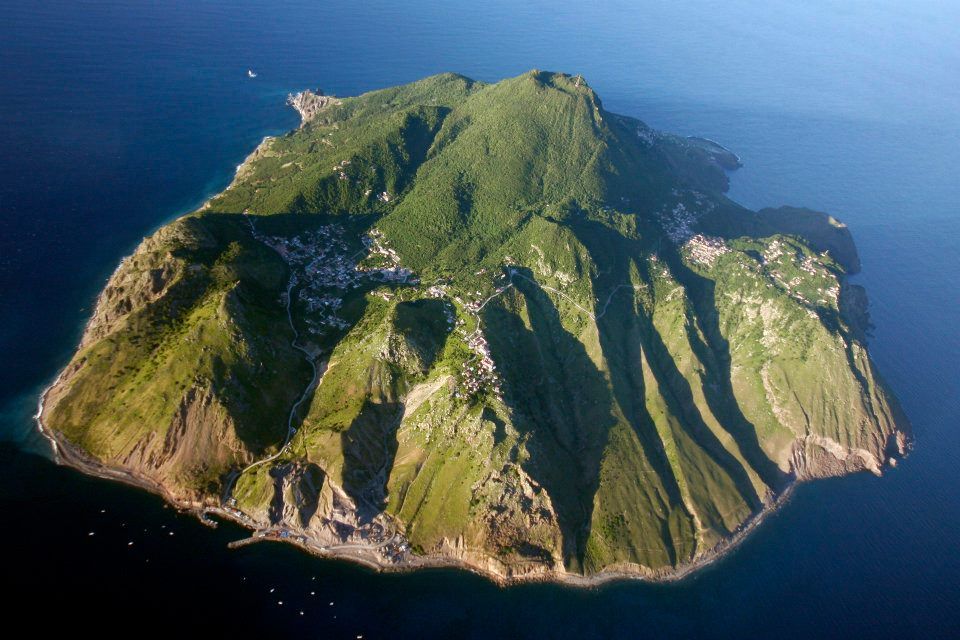 Saba. The highest point in the Netherlands. It is connected by ferry and airplane as it has an airport. It is one of the places I have never been to and most likely will never get to.

In the grey mists of time of 1981/1982 some of my Dutch colleagues used to take the ferry to Saba and then did their drivers license exam there. The exam would consists of driving a car from the local policeman in and out of the gate of the police station and if you managed to do that you got your FULL Dutch driving license. Cost 25 Guilders instead of several hundred in Holland. Our Captain Hess of the Statendam warned everybody against doing this as it was never certain if the ferry would make it back on time before the Statendam sailed, even while staying until 23.00 hrs. And I think he did once sail leaving somebody marooned on Saba who then had a costly flight from St. Maarten to another Caribbean Island to catch the ship again.

Tomorrow we are in France. We will be in Martinique, calling at Fort de France. The French islands in the Caribbean are full French provinces or districts integrated in the mother land and thus I can say we will be in France. Currency is the Euro but they also accept American Dollars and the East Caribbean Dollar. 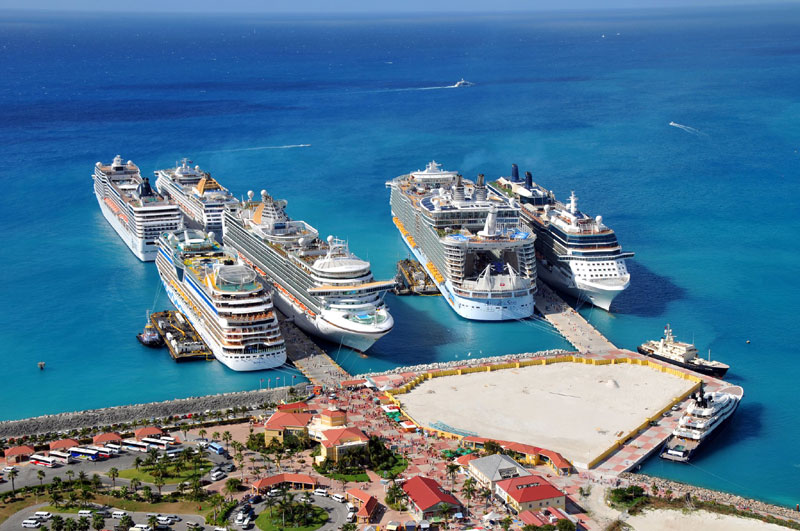 Now this is a busy day. St. Maarten is a bunker port, hence you can see barges alongside and there is also options for recycling. Some ships also do provisioning here as — due the port there is a regular container service to the islands. (Photo courtesy Cruisehive.com)