I do not know who currently makes the Google weather forecasts for this area but it looks like that they take guidance from the cruise brochures – where the sun always shines – and they are not doing it from the weather observations. As mentioned yesterday we were promised a rain free day, and it might have been rain free somewhere, but not in Martinique. Rain cloud after rain cloud kept rolling in. Luckily no torrential rains but enough of a drizzle and you still get wet. Positive thing here is, the rain is not cold and once the rain shower is gone, things dry up quite quickly. And later in the day it remained mostly dry, although dark clouds kept threatening.

A lot of guests remained on board today or only ventured out for a short while, because, if not on tour, then not everything was open. It is Sunday today and officially the shops here are following the routines of the mother land and that can mean: Toutes est Ferme. Everything is closed. Still better than in Barbados where they close on Saturday afternoon at 1400 hrs. so everybody can go to the cricket match. We are there tomorrow so everything should be in full swing then. 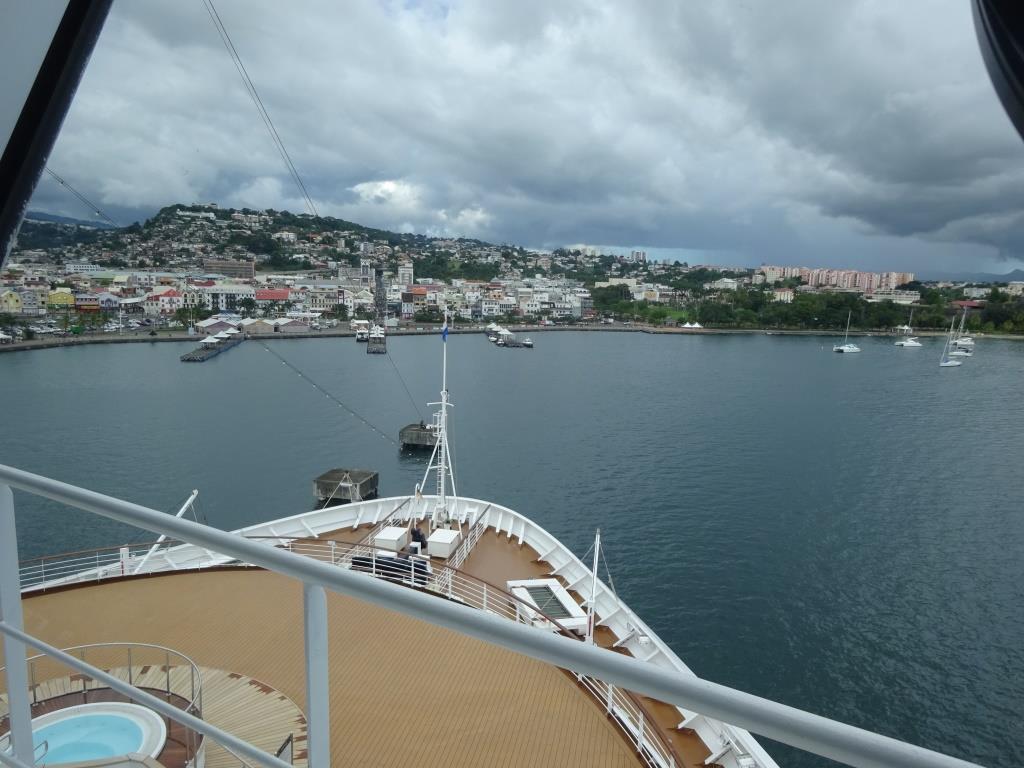 The tender docks in downtown as seen from the bridge of the ms Koningsdam. None of us enjoyed doing tender duty here as we always had to deal with very aggressive  taxi drivers. 9/11 was still far away and thus the docks were not fenced off. And sometimes we had to pull these guys almost out of the tenders. The police were willing to help but only if we asked them in French.  And thus I was always volunteered for Martinique. Now the piers are used for local ferries.

I have been coming to Martinique since 1982 when the island was part of our 10 and 11 day Sea and Wayfarer cruises and we had a guest change over day in Bridgetown. Coming in on Friday morning, change over on Saturday and sailing on Sunday afternoon. I have never figured out completely if we made a profit on those cruises or not but for the crew it was a golden life as we normally could wrangle 24 hrs. free in the three days. Either by combining watches or making arrangements for completely on/off at subsequent calls. Nice restaurants, nice disco’s, nice night clubs and the nice Barbadian culture (The best of the good things of English culture combined) ensured that it was always pleasant and friendly.  Things have changed somewhat with the increase in cruise ships but Barbados is still an oasis of tranquility compared with St. Thomas. 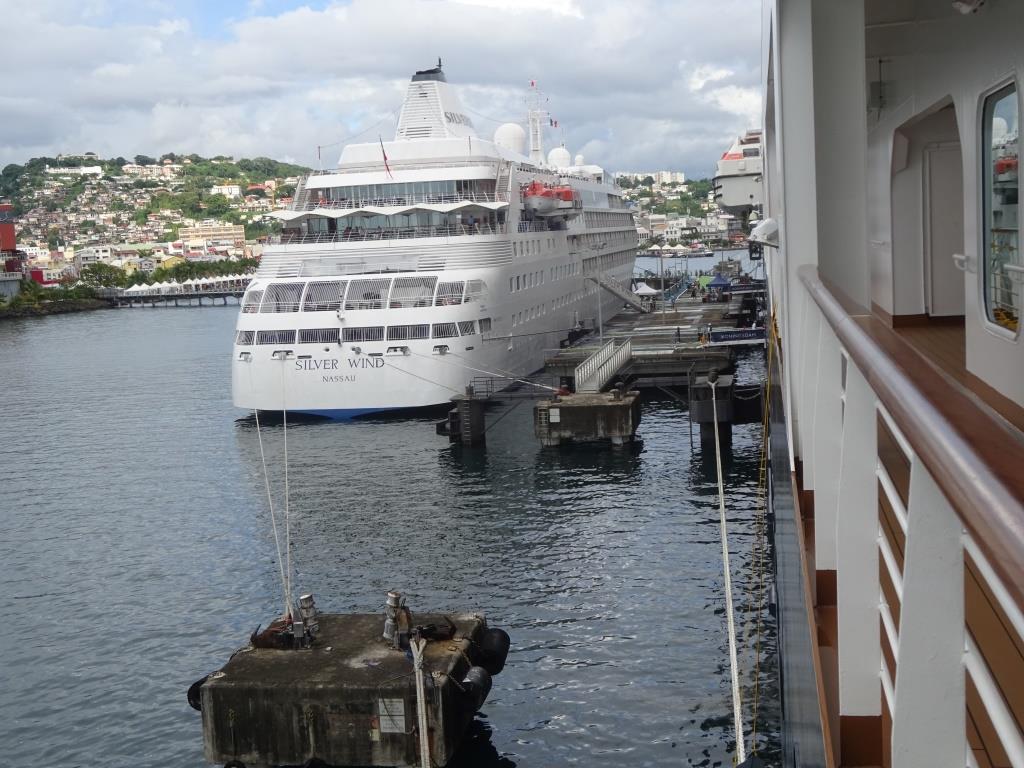 For a small ship the dock is perfect. Please note how long the spring lines of the Koningsdam are. The lines to the left are about right in length but the ones to the right are way too long. But what can you do if there are no more bollards.  Please note the height of the gangway coming down from the Silver Wind.

Until 2012(?) there was only one dock here in Fort de France which had to be shared with cargo ships and you could only dock if you did not have too much draft. So most of the time our ships were at anchor and we tendered into port right under the bow of where we are now. Then they built this dock and by the time it was finished it was too small again as the cruise industry built faster than the local politicians could get their head around. The Koningsdam and larger ships now fit as they have put in a nice big dolphin but they have refrained from making the pier longer. We can just get our two gangways ashore but for the Mega Liners (Please do not forget the Koningsdam is considered a medium size cruise ship) it must still be tight.

Today we were in port together with the Silver Wind of Silver Seas Cruises. This is a French Italian company (The owner is from Monte Carlo) and is in a sort of competition with our Seabourn Cruises. When I speak to Seabourn Guests, quite a few have tried Silver Seas but they did not like it very much. The reason I suppose they came back to Seabourn. I cannot speak for the other side as I do not meet them and maybe those guests do not like Seabourn. There is a difference as Silver Seas is focused on European Guests around the Mediterranean, while Seabourn has American and more European Guests from  Northern Europe. The language issue always plays a role and thus you get a sort of natural shift. One way or the other. 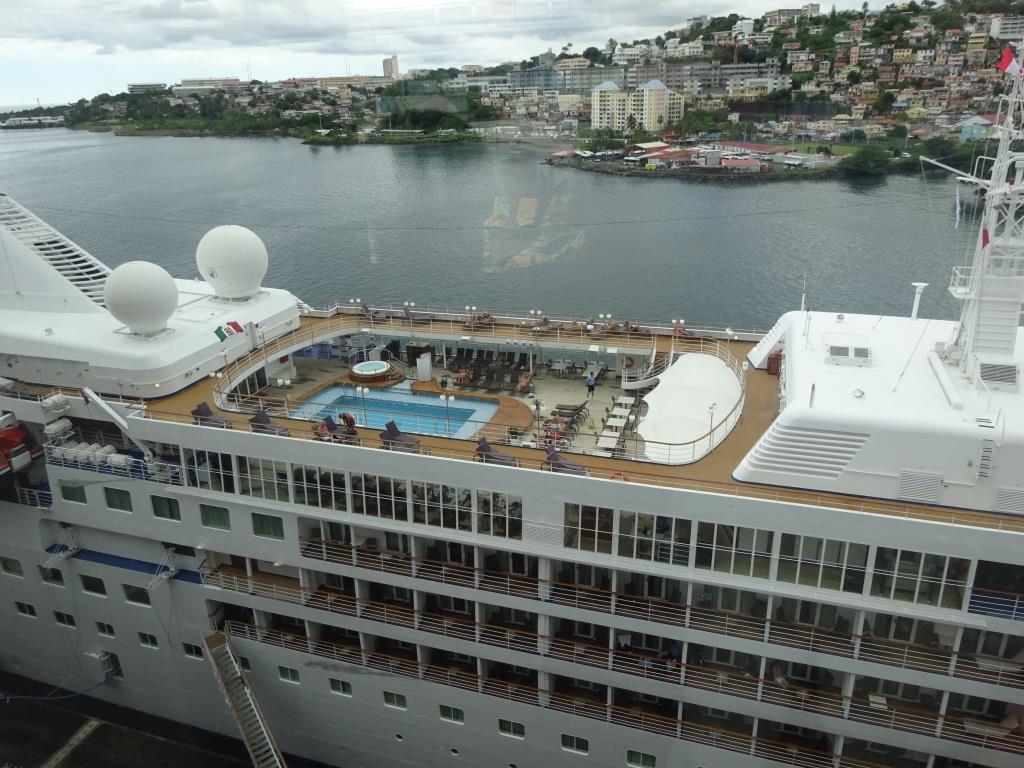 The Silver Seas ships follow the same build as the other luxury segment cruises and I was therefore not amazed to see that, to get ashore, they had the long gangway out. Lot of steps and that is not great for wheelchairs and less ambulant guests. On occasion we had the same thing on the Prinsendam as that ship was built in a similar way. Gangway on B deck, Gangway on Main deck but nothing in between. Also the setup around the midships pool area is similar, sheltered from the wind but no roof. After Holland America bought Home Lines we got the patent on having a Magrodome (first ship with one was their Oceanic) and since then we have retractable roofs on all our ships. Then when Carnival Corporation bought us in 1989 they got their hands on the patent and now you see magrodomes all over the place. 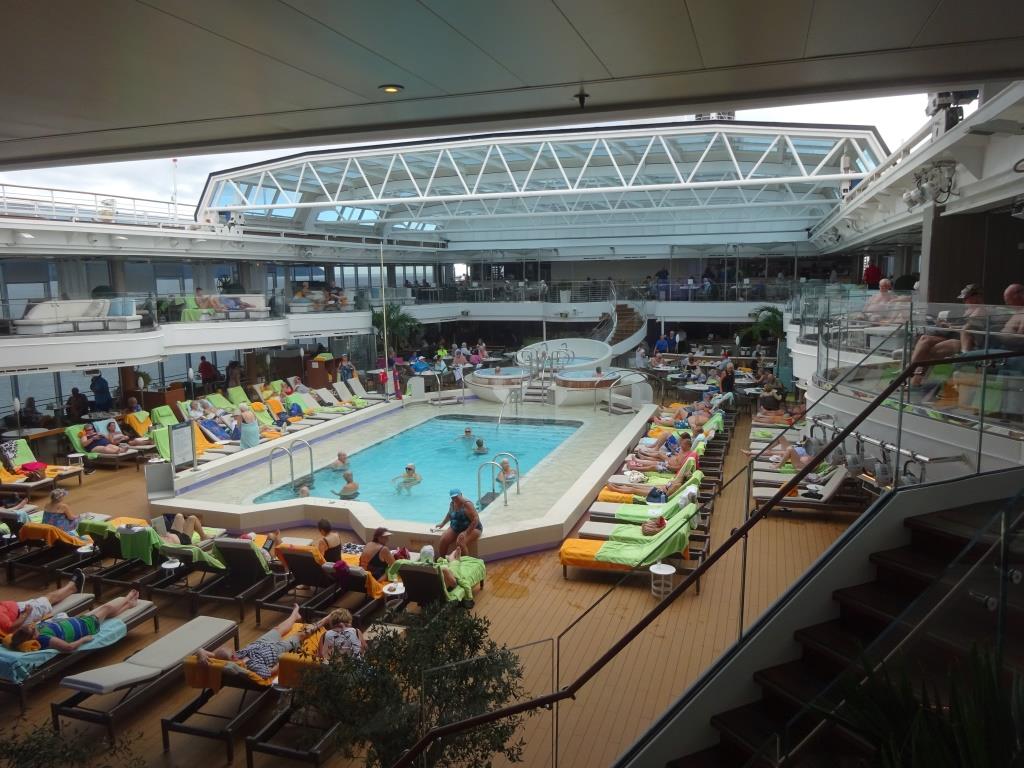 Now the same pool but on the Koningsdam.  Also sheltered but can be closed when it rains. Why do we have so much nicer towels compared to the Silver Wind; while they are supposed to be a lot posher than we are ??

Tomorrow we are in Bridgetown Barbados. I will be spending a whole day in the tender as it is time for the Tender – refresher- exams for the sailors. Those exams take place one a year and have to be conducted by somebody with a Master license so I normally volunteer as the Sr. Officers on board are quite busy.

Weather for tomorrow: Partly Cloudy, 86oF / 30oC gentle breeze and No Rain.  (So we will see again)