It is a slow run from Martinique as it is a mere distance of 120 NM. To be covered in 12 hrs. So 10 miles an hour. Good for the fuel and good for the way the ship rides the waves. Tonight we will have an even shorter distance to cover as it is 110 nautical miles from Barbados to Castries 97 NM.  as the crow flies but we have to sail around the South point and up the coast as Castries is on the west side of the island. Again a good speed, as with 10 knots the stabilizers are still effective and the ship can gently ride the North Atlantic swell that is running here. Normally to keep that 10 knots we make a wide loop once inside the Caribbean Sea again and then approach Castries from the West.

The reason for the North Atlantic swell is the fact that Barbados is not laying in the Eastern ring of islands of the Caribbean Sea but a 100 miles to the East of it. A lonely island in the Atlantic Ocean. Thus it is an Atlantic Island but long time ago it was decided that it was officially part of the Caribbean Sea. I assume that a very Highly paid commission, after weeks, maybe months of intense negotiations came that decision…….. All the Caribbean Islands are from a Volcanic origin and the Caribbean Islands lay on a continuous rim of Volcano tops coming up from the Ocean Floor. All very dormant although Mount Pelee on Martinique did let the world known in 1929 that there were still volcano’s by erupting with a considerable bang and fireworks. 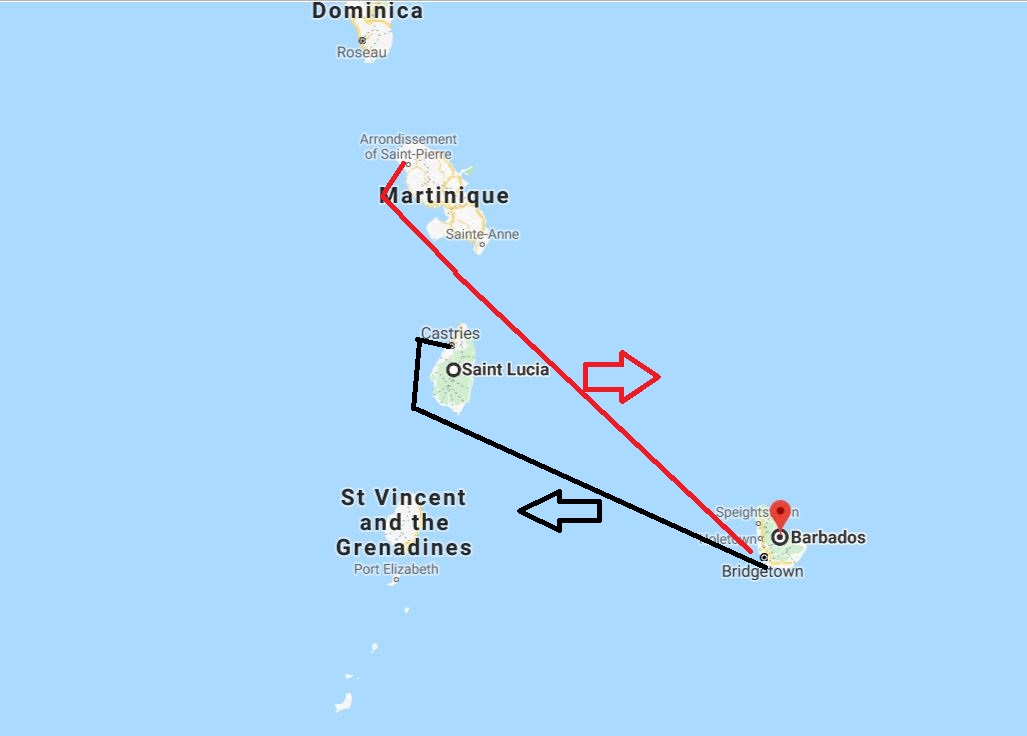 Our route out and our route in.  As you can see Barbados is a lonely soul outside the ring of islands that make up the Eastern Boundary of the Caribbean Sea.

Barbados is sitting on such a top as well but in this case it is a single and very long (vertically very long) pinnacle coming up from the depths. The cone has eroded away long ago and if you walk around now you think that the island is made up of sand, coral sand, created by the erosion of coral reefs. But it is a lonely pinnacle far away from the rest. The location of the island made it of interest to the British as it is a perfect Guard post or island fortress, to control the south east entrance to the Caribbean and the east coast of Brazil. Hence the British held onto it as long as they could. The island then went semi-independent in 1966 with which I mean they are independent but still have the British Queen as Head of State.  She is represented by a Governor – General, who oversees Her Majesty’s Interest, whatever that interest might be.

I mentioned the Volendam in 1982 staying weekends in Bridgetown, in yesterday’s blog, and during one of those visits I met the then time Governor, Sir Deigton or Deighton, when he visited the ship for a function which good cause I cannot remember. He was a local, so not sent from Great Britain but had come up through the ranks of the local political system He said that he liked to talk to Junior Officers, especially from the Merchant Navy as they tended to be less impressed by the name of his office. He was right there as we “cloggies” did not have a clue what he did. So we asked him what it was that he exactly did and he said” “ a lot of walking around, a lot talking and sometimes having to be careful not to do a lot of drinking “. Also he did a lot of stamping. That needed an explanation of course and then he explained in quite some detail that as he represented the Queen in Barbados he had to officially approve the laws passed by Parliament on behalf of her Majesty. Although in real life it was not stamping as such but having a seal affixed. And so we all learnt something new again. I believe that he died a few years later while still in office. 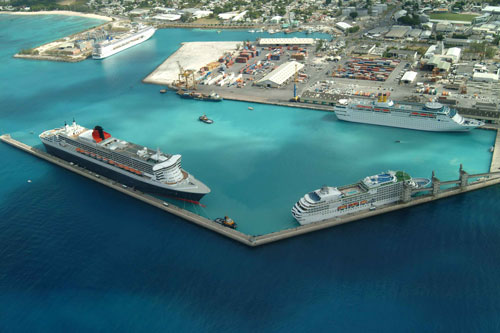 The port of Bridgetown, Barbados. This aerial photo shows the Queen Mary 2 at the North Breakwater,  an unknown (ex Renaissance ship) at the Sugar Berth and a Costa ship (I think the Costa Classica) at berth 2 south. That is were we are today. Then there is 2 north and they try to reserve that for the cargo / container ships.

The British Fleet was all excited about the South West side of Barbados there where now the modern port is, as it was in the shelter of the land and it had sandy patches so they could strand the ships for repairs and cleaning. Once they put in the long breakwater (which is long enough for the Queen Mary 2) then there were also plenty of docks available. We docked today at 2 South which is the dock closest to the terminal. It normally goes to the largest ship or the ship which uses Bridgetown as a turn over port. These are mainly ships sailing for the British Market as there are direct flights from Barbados to London. But we were the only cruise ship in port and thus we went into the best corner. The Breakwater was occupied by a chemical tanker and later on three small coasters that were coming in for re-fueling. 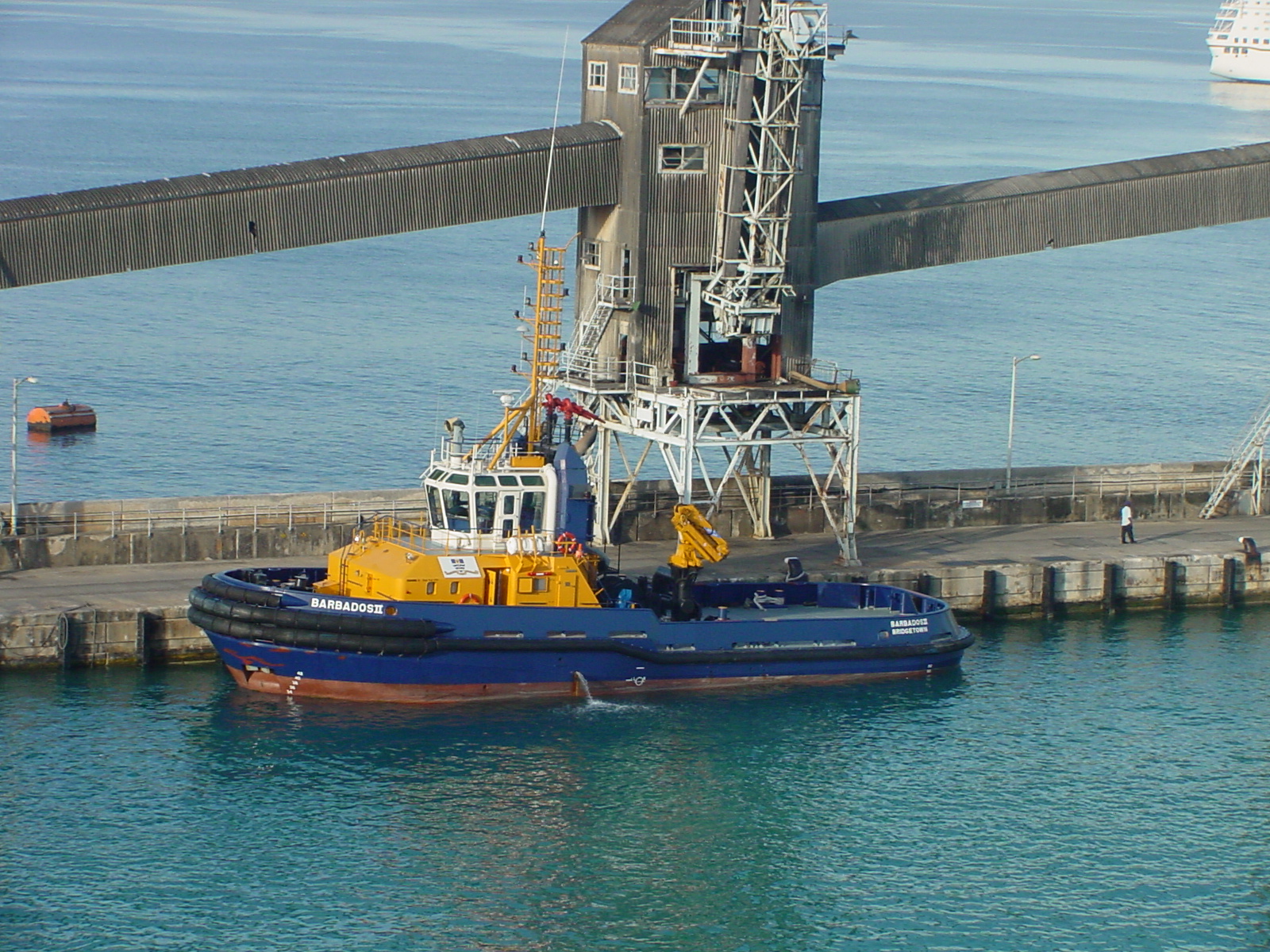 Bridgetown port requires the assistance / standby of two tugboats for any ship coning in or going out. Even the most powerful ones. Mainly a precaution against ships bumping into the docks. There is the Barbados II docked at the Sugar berth. Barbados was once a major sugar exporter and the conveyor belts for the loading are still there although no longer in use.

The guests had a wonderful if very warm day today. Hardly a cloud in the sky and where normally the Trade Wind blows quite strongly there was only a gentle breeze.

Tomorrow we are in Castries, St. Lucia. Weather should be partly cloudy but they warn for scattered showers. 30% in the afternoon. I have seen that before and if the mountain range does not stop it, then it will dump right on the down town area. So hopefully the mountain range is high enough tomorrow. Temperatures 88oF / 31oC and a gentle breeze.