We were told that we were the only ship in Castries but it turned out that there was a second one, a small one, the Hamburg. This is an expedition ship sailing for the German Market. Although everybody can book on it, but it is sort of important that you speak German. With 15,000 tons and 420 guests she started out life as the Columbus C for the German company Hapag-Lloyd in the 5 and 6 star segment. Now she is owned by an investment company and chartered by a company called Plantours. Because of her small size she can get to a lot of places other ships cannot including sailing via the St. Lawrence Seaway into the Great Lakes and the Corinth Canal.  The pilot parked her downtown thus leaving space for a cargo ship to come in as well. (And to please the shop keepers at the cruise terminals of course)

There are two cruise terminals, Seraphine 1 and Seraphine 2 and the western one has been made manageable for large ships by adding dolphins for the mooring ropes. When I came here first in the 1990’s we anchored outside with the ss Rotterdam and then had a long tender ride in. Then they did some dredging and by the late 90’s these two terminals were just finished and we had to put all our lines ashore. Then came slightly larger ships and the port added mooring buoys. 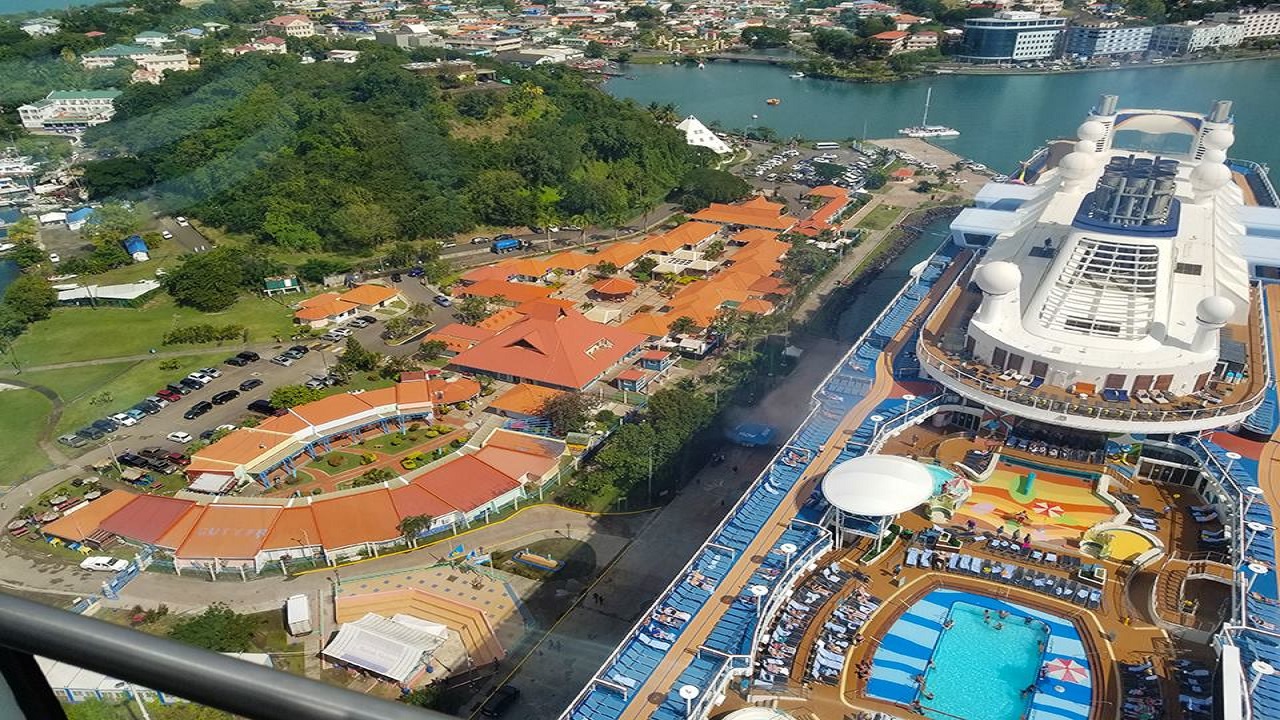 Here a photo taken from the top of the Anthem of the Seas of RCI with 347 meters this ships is one of the longest visiting Castries. The cruise terminal, shopping village started out with just the two curved buildings and then slowly expanded.

Then came even larger ships and the port added concrete dolphins for the mooring lines. I do not know what they can do next because 400 meters of length is the maximum size that can swing in the port and that is a tight swing to start with. Even larger ships would mean that they would have to back in and although possible, as it is a straight course, it is not as easy as going forward. At times there can be a considerable amount of wind playing around the entrance. Then the ship comes in the lee of the coast and the wind abates, then it can blast through the gap in the mountains where they have located the airport and then you enter the natural port which in the mornings is normally almost wind still. This fluctuating wind on the beam of the ship makes it quite difficult to back in on a straight course. With normal trade wind conditions it then breezes up in the afternoon, so every captain likes to dock nose out, to make speed before the wind catches the ship and let it drift. So we also swung on arrival, ready for departure and so did the Hamburg and so did the two little cargo ships in port. Always ready to get out if the wind takes a bad turn. Unless you really believe the weather forecast. 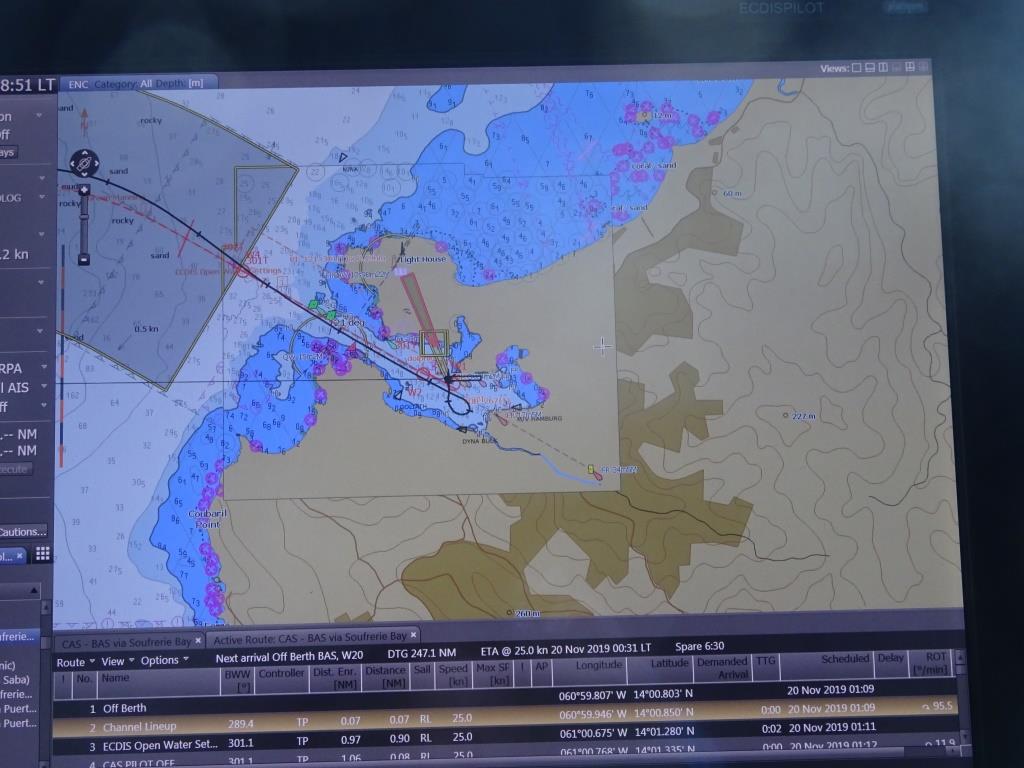 The way in this morning. Nose in, swing in the port and then nose out alongside the cruise terminal. As you can see it is quite a distance if you would have to sail the ship in while going astern. Especially where the oblong brown mark is visible. That is the airport and the runway goes through the gap in the mountain; but so does the wind.

This morning I was playing around with the tender again to finish the yearly examination of the sailors for their Tender Operator Proficiency. This is a sort of refresher course to dust off the knowledge of how to run a safe tender operation. The initial qualification course is given in our training institute in the Philippines. This morning we combined it with a Man Overboard Drill. That is not politically correct anymore as there are more women falling overboard than men if you have to believe the cruise papers, so we held a Person Overboard Drill.  The Maritime Law has not been adjusted yet for this so officially it is still M.O.D.  We have to conduct this drill every three months and is mainly focused on a rapid response of all team members, rapid lowering of the boat, rapid retrieval of the casualty and the rapid return to the ship for handover to medical. 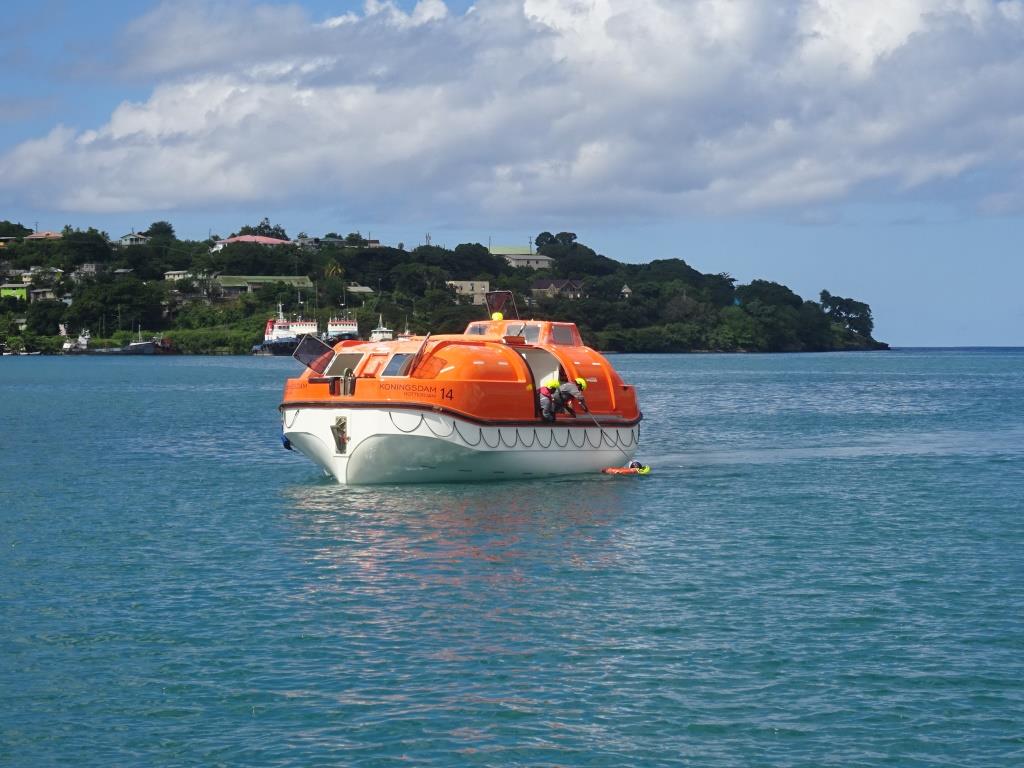 The “Person Over Board” boat approaching and retrieving the casualty. The Koningsdam does not have a fast speed boat as some of the other ships. We have opted for an adapted lifeboat with a bow thruster and davits with extra fast hoisting capacity.  By using a regular size boat we have space to send the medical team and/or security with  the boat if it has to go a long distances away from the ship.

While playing around with the tender we lend a helping a hand by putting the “M.O.D” in the water at a fair distance from the ship so the lifeboat had to travel some distance and could do a bit of exercise.  Luckily the harbor master understands the needs for these exercises and tender trainings so we always get permission. Permission which is harder and harder to get as there are a lot of ports who immediately think that you are spying, illegally entering the country or are planning to blow up the port. The Caribbean ports in general are very good and you see cruise ships exercising all the time with boat drills and related. Ports like Bridgetown and Castries are ideal as they are really sheltered from the ocean swell and thus perfect for messing around with boats.

Today we sailed at 16.00 hrs. and that is the normal departure time for Castries. Early as it is a standard feature to go sightseeing to the Pitons at Soufriere to the South. The Pitons are two Volcano cones, also called plugs, where through the millennia the outer crust has eroded away and the inner harder core has remained. They are both over 2500 high but because one is higher than the other they call one the Gross Piton and one the Petit Piton. So the ship will make a turn in the bay and then we sail on to our next port.

So tomorrow we are in Basseterre St. Kitts. And I am intrigued again by the weather. Today the weather was spot on. At least my interpretation of it. Forecast was 30% chance of rain in the early afternoon between 1400 hrs. and 15.30 hrs. the whole 30% fell nicely on the ship. Of course around the time that the tours were coming back. Luckily the rain here is warm, unluckily the rain here is also wet. For tomorrow: 84oF / 29oC partly cloudy and an 11 % chance of rain just before noon time. See if we get that 11% dumped on the ship. The only person who was happy with the rain was our Bo ‘sun as it washed all the salt of the decks.’ 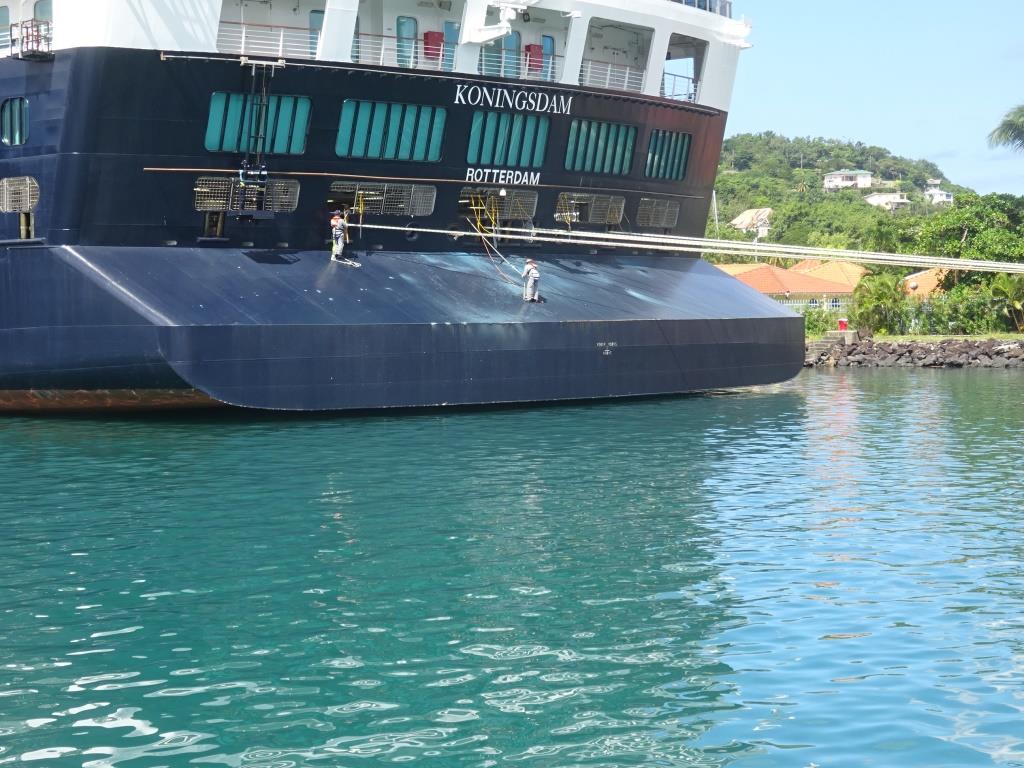 Some ships have a rock climbing wall. Our sailors have their own slippery slope for climbing. This is the “duckfoot” of the Koningsdam which is a sort spoiler that pushes the stern onto the water and that improves the fuel efficiency. Both sailors are connected to a safety harness with lanyard and are each monitored by a sailor inside. They just got the primer touch up done before it started to rain. Tomorrow the blue paint will then go on.