The sail by past the Pitons took place under very dark and threatening skies which at that moment was maybe not so good for the guest experience but promised hope for St. Kitts. Because what rains early cannot fall later. And that worked out, sunny skies all day in Basseterre. The Trade Winds are suppressed at the moment by a high pressure system in the West Caribbean and thus there was only a gentle breeze blowing. We were in with the Carnival Fascination and with two high ships on opposite sides of the pier the result was that the pier was in the shade all day long. A welcome respite from the heat on the island when walking back onto the pier.  The Fascination is a 70,000 ton ship so a bit smaller than the Koningsdam but when full it can carry the same number of guests as we normally do. But then she sails for another market segment and another price point. Still I liked the water slide near the stern which was retrofitted sometime in the past and a few of the children on board were really disappointed in HAL. But according to the parents we are better with the ice cream. 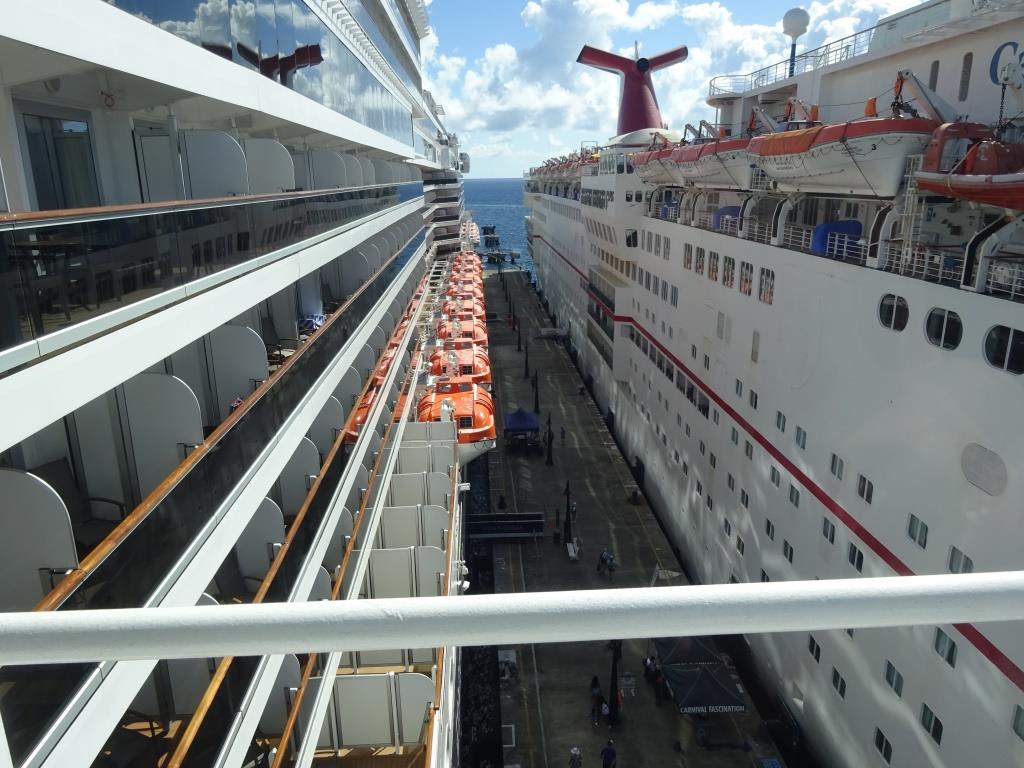 Shade in the morning provided by the Koningsdam, shade provided in the afternoon by the Carnival Fascination.

Sailing towards St. Kitts is about the easiest thing to do, from St. Lucia you just go north. You do not even have to change course much to dock as the pier is also North to South. You just have to brake on time as the terminal is right at the beginning of the pier. They have constructed a 2nd pier here so 4 cruise ships will be able to dock at the same time if needed. To accommodate the larger ships some dolphins have been added to the existing pier, where once the ships would fit alongside the main platform. Then there are some loose dolphins to the East which are there for tanker ships to use but you could put a cruise ship alongside it as well and then tender into the pier. Advantage is that you all ways will have a good leeside as the ship would not swing on the Trade Winds. 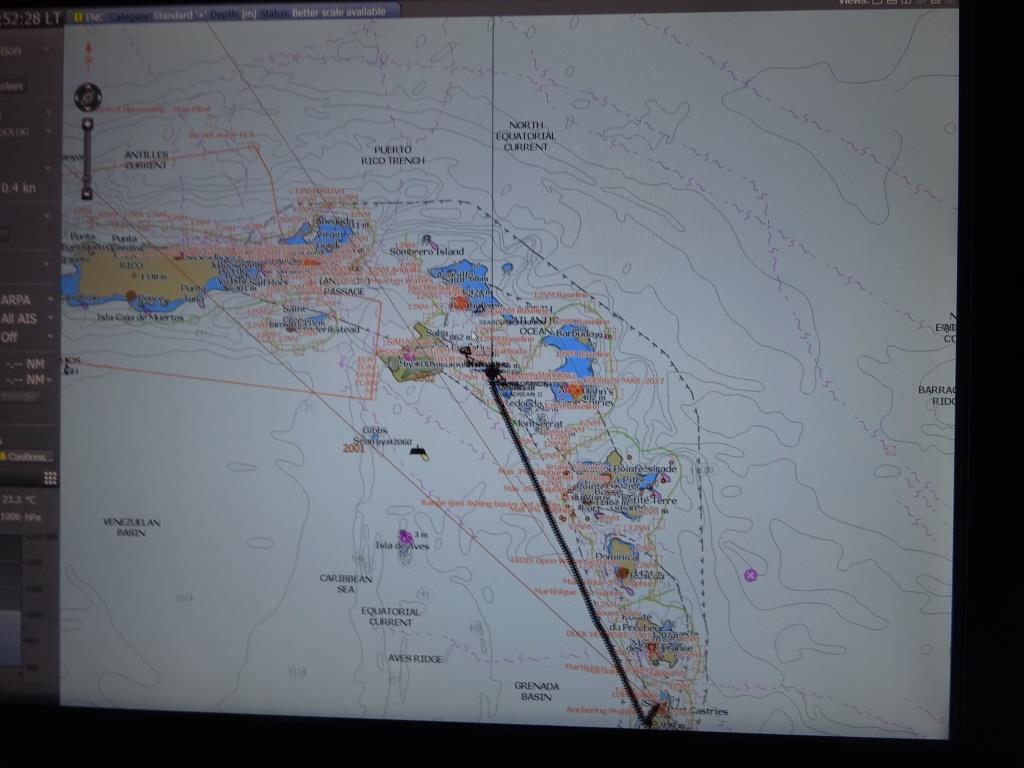 The course from Soufriere (Pitons) to Basseterre. You could not make it any easier, even if you tried.

The crew had something special going on today, we had our semi-annual “Cockroach Show”. This asks for some explanation as I do not know if other companies are doing it the same way. In the good old days cruise ships, and many other ships had vermin on board. Partly due to sanitary practices both ashore and on the ship and partly due that there was so much wood on board. The use of real wood came to an end with a changing to the safety rules and with the help of organizations such as USPH. Canadian Public Health and the Dutch Food Authority, the ships galleys became completely stainless steel but also the knowledge of the crew of how to handle infestations improved. Since about 20 years now the well run cruise ships are vermin free.

But now there is the challenge of keeping the ships vermin free. Because cockroaches, ants, and bed bugs can come on board with provisions but also with guests and crew. Plus rats and flies can make it on board by themselves. Rats we stop as we have rat shields on the mooring ropes and flies we try to keep out by keeping the doors in port closed. Normally flies and other flying pests do not like salt air so we have a lesser issue than maybe buildings on the shore side but when there is a wind blowing from the land which wafts over the ship, then…………..

So the “show” we all saw this morning in the Main Stage is one for awareness. “See Something, Say Something”. Everybody needs to know how a German or an American cockroach looks like, from being very small to full grown and the same goes for bed bugs and ants. If and when they are spotted, the crew should report them straight away. Not just the crew who work in the galleys and the provision areas, NO everybody including the Entertainers and Administration staff. If one is spotted than we have a specialized crew member on board who will investigate and take appropriate action if needed. But we need awareness and recognition and hence we have twice a year, if possible, a 30 minute refresher about the issue. I have not seen a cockroach since the late 1990’s so I think the program really works. But we have to remain vigilant as it is amazing what variations of bugs we do catch on occasion, either coming on board by our own means or transported on board by provisions or by guests or crew. But if you catch them at once then there is no problem as there is no chance of an infestation. 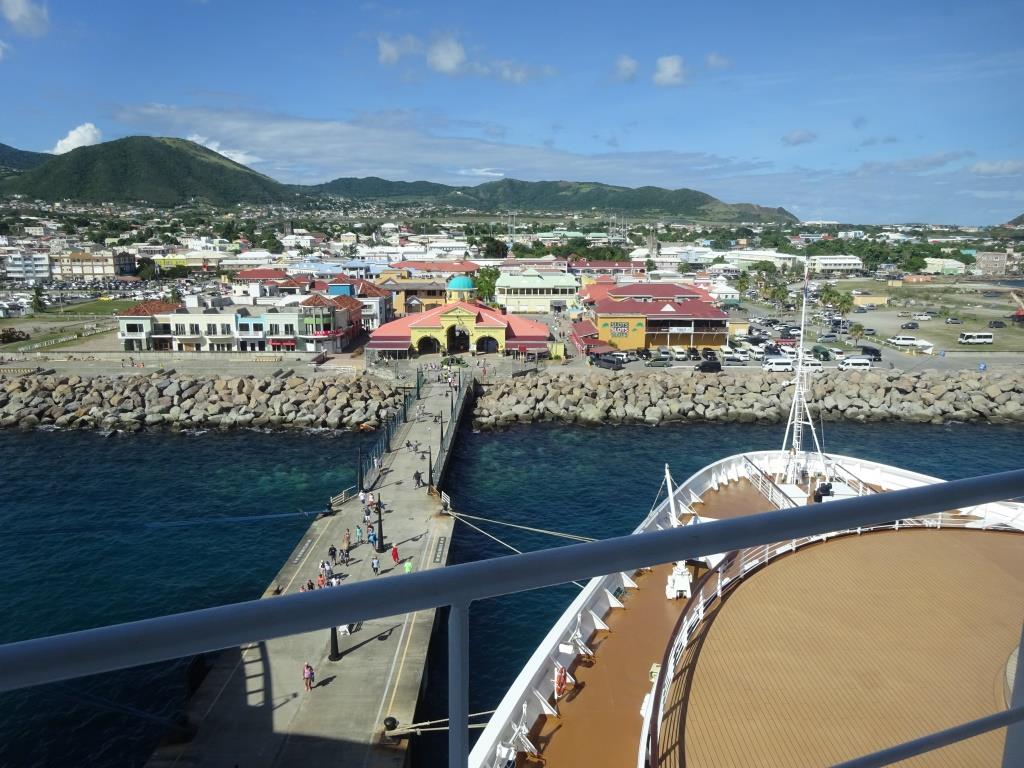 The town of Basseterre and the island behind it.

Tomorrow we will be in St. Thomas, the Caribbean Cruise Capital. There are supposed to be only two ships, us and the Crystal Serenity and that means that we will dock in downtown at the West Indian Dock Company Pier, better known as Haven sight (mall). My favorite bookshop has long since closed; lost the battle against the Internet and although the post cards business is in demise as well, it might be worthwhile to have a look, in case there is a publisher who still believes in it.

Weather for tomorrow: Partly Cloudy 29oC / 84oF, a gentle breeze and only a 10% chance of a shower.