We picked up the pilot at the bright and early time of 06.00 in order to make it to the dock by 07.30. Helsinki is hiding behind a lot of reefs and rocks and it takes about 90 minutes to sail through the channel and then swing at the dock before going alongside. 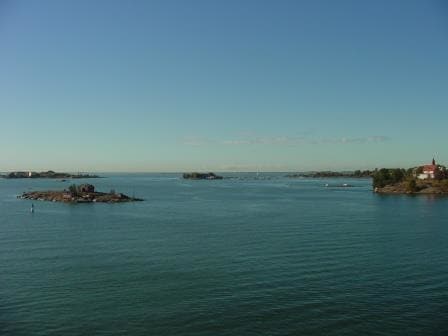 Lots of nasty bumps. Varying from small to quite large.

The reefs are not really reefs as in Coral Reefs but as in rock pinnacles which are sticking out to just above the water. Sometimes barely visible, sometimes in the form of smaller or larger islands. In between the water is deep and thus you can sail safely past them. But on occasion that passage is quite close to very close.

The Hole for down town Helsinki. It looks quite wide but it is not and there is a turn in the final approach.

If you go to downtown Helsinki, you have to go through “the hole” which is a very narrow passage between two very large rocks/islands protruding out from the water. They form a natural gate to the city and thus it has fortresses on the top to keep the nasty neighbors out from long time ago. Going through the hole is not for the faint hearted, if you have never done it before and the larger the ship is (not just wider) the “more interesting” it gets. The length of the ship also plays a role as you have to change course close to lining up. So the longer the ship is, the more difficult it is to get the sail through course right. 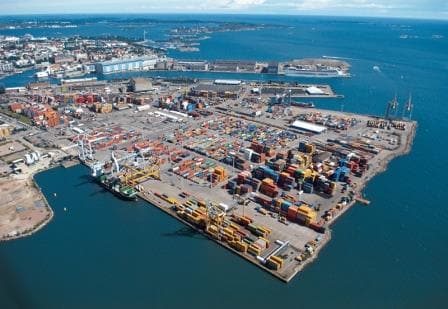 Overview of Helsinki. The cruise ships docks are on the far side of the container terminal. Down town is in the far upper left.

As a result they keep down town for the smaller ships. I docked there with the Prinsendam and the Veendam but the Zuiderdam is so much bigger again that it was a better idea to go to the new port on the west side. Most captains do not mind this location at all as it is so much easier to dock here. As I said The Hole for down town is not for the faint hearted. Also the piers here are better and newer but it is considerably further out from town. But as the invention of shuttle busses has also reached Helsinki it is not too much of an issue.

We had a bright sunny day again but a very chilly one. There was a cold wind blowing from the North West, from the Bothnic area and it felt as if this wind had been funneling over the ice of the last season as it had a very icy smell. Beautiful day to go ashore but wearing two pairs of socks while doing so.

In the meantime I kept the crew focused with a major drill experience. The whole ship has been catching up on drill experience as not much practical was possible with all the sea days during the crossing. Today all the efforts culminated in a combined drill with a lot of aspects touched upon at the same time. All 800 crew had to run around to support the big effort with their (small) part. The safety operation of a cruise ship is the same as an analogue watch. Hundreds or little parts ticking away with the only purpose in making the two hands on the dial go round and round. 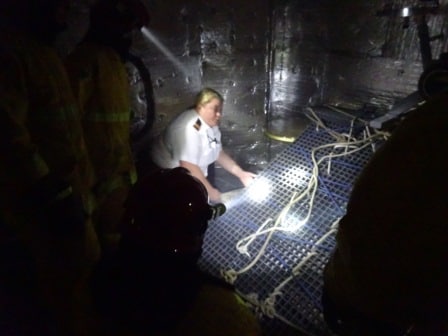 The ships Medical Officer assessing the casualty under the collapsed bulkhead before an effort is made to raise it. A fireman is providing light with his helmet torch.

Today the complete three alarm cycle (Fire, Assembly, and Abandoning ship) had all the elements to make everybody very happy. We had a fire in a large space in the crew area and we had a collapsed bulkhead in the same area pinning down a (dummy) crewmember. This meant that after the fire was out, the Damage Control Team had to come out and jack-up the bulkhead before this casualty could be retrieved……………. and then we had to get everybody safely off the ship. To make the latter interesting we had six cadets in the ship who were simulating: confused guest, guest refusing to leave the cabin, wandering child, Guest slipped in the crow’s nest, and two crew fallen down the stairs. The whole sequence took from 09.30 to 11.00 hrs. while each evolution was carefully documented for further review and lessons learned. Anybody who has even remotely been involved with ships will understand that doing a combined Fire, Damage control, triage, assembly and abandoning ship drill is a major challenge to undertake. I presented the challenge and the Zuiderdam crew rose to the challenge and did very well. The fire was extinguished; the casualty safely retrieved after the collapsed bulkhead was jacked up, medical treated four casualties very quickly and had them dispatched correctly to the correct lifeboats. Which went down in the water as required. My compliments for a well done job.

We will sail at 17.00 hrs. tonight for a quick crossing of the Gulf of Bothnia and then a long, but very scenic sail into Stockholm for an 08.00 arrival. We will have to anchor as the port is full. Which is extra work for the crew but the guests are tendered directly into Stockholm center and that is quite handy. We are expecting more nice weather and if the wind dies down from blowing over all the ice cubes further north, then we should have a very nice spring day.