Well there was some good news today, the good ship Zuiderdam could dock after all. Somehow the cruise ship dock at down town was available and there we went. We did so with a delay, a not unusual delay, as there was a ferry in the way. The downtown dock Stadsgarten is next to two Ferry terminals for the Viking Line. And yes they have a departure at 08.00, or around that time, depending on the fact if loading is finished, and then they have preference. Ferries are like train services, their customers expect a regular schedule. Thus with 30 minutes delay we docked as near as is possible to down town. For good walkers it meant a 20 minute walk, a very scenic walk, along the harbor and for the non-walkers a 5 minute taxi ride or using the local bus. The captain made the delay up to everybody by also staying 30 minutes longer and thus shore time remained the same. 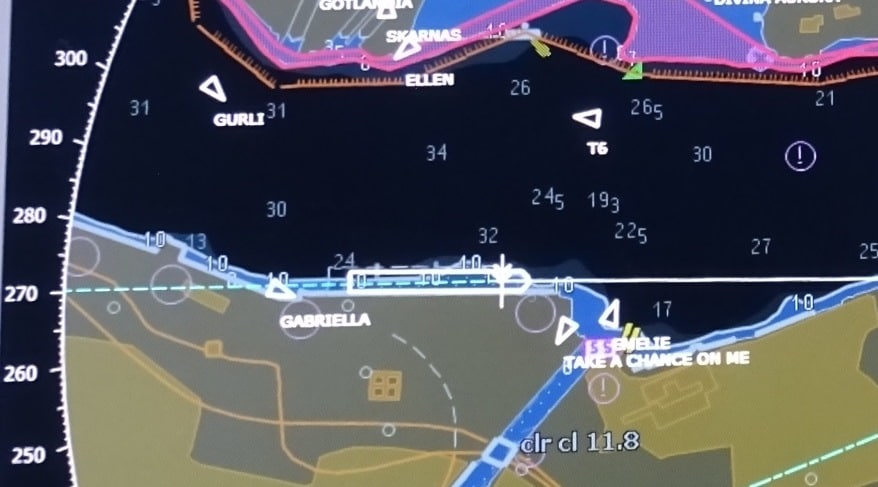 This is a photo of the Eelctronic chart. Hopefully you can read the name “Take a Chance on Me” docked with another boat the Emilie under our bow.

What is also possible here is to take the local hop on hop off bus which stops very close to the ship. I do not khow many of my readers are currently on board, as I have been plugging these busses considerably through the years, but the Big Red Bus was very popular today; the local tourists might have had a hard time trying to get on as the Zuiderdam Guests were out in force. Another option unique to this dock is the sightseeing boat which docks right under the nose of the Zuiderdam. They are identical in size and layout as those in Amsterdam and that makes sense as Stockholm has the same sort of infrastructure as Amsterdam with canals and low bridges.  The boats have names derived from the songs of Sweden’s’ most popular export article: ABBA. And thus we could see “Take a Chance on me” docking under the bow and the “Dancing Queen” sailing by on the way to downtown. I wonder what sort of reaction the skipper gets when he makes a security call for a safe passage and announces “Take a Chance on Me”.  I supposed the whole port is used to it but I would be tempted to come back with a ………… not so serious answer.

The sail into Stockholm is a long one and a very scenic one. If you need to be motivated to get out of Bed early, then this is a good motivation. A lot of guests had followed the Cruise Directors advice and they were out in force. So much that I had a hard time finding a table for my breakfast at 06.30 this morning. This evening we do the reverse route and the weather is perfect today for some very good and extensive sightseeing. The great thing about Stockholm is, you sail inbound from East to West and outbound from West to East. Thus you always have the sun behind you. Shining perfectly over the sights ashore and avoiding all the glare which can otherwise spoil your photos. 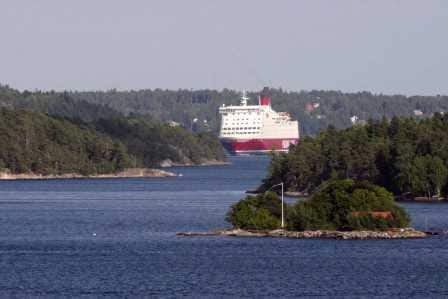 One of the Ferries going through one of the narrow passages.

Because some of the passages are quite narrow (more of those nasty bumps in the way, nearly identical as yesterday in Helsinki, the whole area is covered by radar and by a Vessel Traffic System. This VTS advises the local traffic and ensures the ships are observing the local maximum speeds. A few points in the route are one way only and then the pilots arrange for the right meeting points. Again we have on occasion a ferry which gets in the way and if so, then we have to wait, as that ferry is on a “railroad schedule”.   The most prominent company is Viking Line with their red hulled boats and today we passed several of them. I wonder if the Ferry captains still enjoy the spectacular scenery as much as we do or if they got used to it in the same way I got used to Ketchikan after seeing it 200+ times (and mostly in the rain).

This is my artist impression and thus not very good. But it roughly indicates the difference between going North and going South.

To get in and out of Stockholm there are two major routes. South and North. South is shorter and North is easier. The south has a 90 degree turn shortly after the pilot station. As a result they have put a length restriction on the ships which are allowed to make this turn. With the older HAL ships we always used the south route, now with the larger ships we are stuck with the north route which adds a considerable amount of time to the next journey going south to Kiel. The north route takes you quite far north and once in open water you have to sail the whole stretch back again, until you come by the south exit.

Tomorrow we have a sea day, giving everybody the chance to relax and take a deep breath before we end up in Kiel which we use as a gate-way for Hamburg. Although there is nothing wrong to stay in a Kiel as well. Plenty of things to do. The weather is holding and if it does so for a few more days then we will have had a magnificent spring cruise in the Baltic.