Today we have a relaxing sea day, sailing almost straight south towards Kiel and the “Kieler Bucht” as the Germans call it, the curve in the land in which Kiel is located. Just south is the entrance to the Kieler Canal which is also an interesting area. (See my old blogs in the archives) It is still chilly out here and that makes for clear skies and very good visibility. At 07.00 when I was on the bridge, I could see the mainland of Sweden on the Starboard side and the island of Gotland on the port side. This is the island with as its capital Visby which I referred to after we left Warnemunde.  Gotland or Gotaland is part of a province on the mainland which is also called Gotland or Gotaland. That can make it confusing but this also happens in other places well such Washington State and Washing DC. Which gets a lot of Europeans in a good muddle. 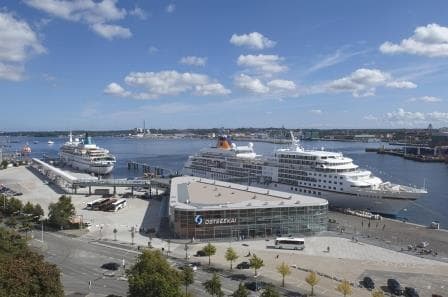 Kiel cruise terminals on a sunny day which we expect as well and close to downtown.

By the time we reach Kiel we will have made a full circle of the Baltic Sea. We will cross our entry course (Warnemunde to Tallinn) in the very early hours of tomorrow morning. After calling at Kiel the ship will retrace its steps and call at Gothenburg and  Helsingborg before heading back to Copenhagen.  We will have then sailed through an area full of history and our 12 day cruise was really too short to do it justice. If you could pump out part of the Baltic and clean the mud away, you would walk through a complete museum of artifacts and left overs from more than 2000 years of habitation and trade. The largest deposit of artifacts come from the 2nd world war. Russian scientists made a count in 2005 and found over 5000 wrecks and war relics on the bottom. The worst one is the Wilhelm Gustloff. This was a German cruise ship which was used in the last stages of the war to return to Germany with as many refugees as possible, running away from the advancing Russians. No exact count is known but the numbers vary from 6000 to close to 9000 casualties.  I have a small article about it on my blog under the header “of days gone by”. The First Mass market cruise ship”. I keep it to a number of 6600 casualties as most WWII experts seem to agree on that but there might have been many more.

The last few days I have been out and about for measuring and inspecting “Workplace Safety” on board. This is the safe working of the crew when serving guests, when carrying out maintenance and repairs and when doing drills. This can be as simple as: how to hold a fire hose.  Ever opened a garden hose and saw it starting to play around as the nozzle was left open? A garden hose does not do any harm and is not very dangerous. A 2 inch fire hose with a 10 pound nozzle on the end and 9 bars of water pressure can create havoc and thus it is important for the crew to be trained, drilled and retrained in the basics of hose handling.  And anything else as well. 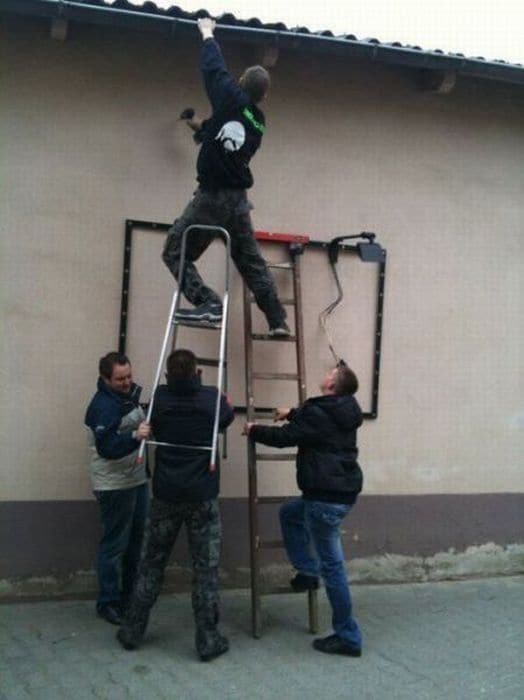 This is not on the ship…. I have been given to understand that this was some sort of creative thinking by workers in the East of Europe.

Another item is working above head level. This causes quite a few accidents in the industry as grabbing a stool, turning over a trash can or standing on a box is much faster and easier than first collecting the correct ladder. The crew needs to understand as well, when you can use a small ladder (never stand on the top step), when to use a large ladder, and when working over 2 meters above the deck a safety harness has to be worn. Officers and Supervisors train the crew and themselves and there are trainers who train the trainers. Then there is me to see if it is all been done, measure effectiveness and provide advice to the captain of where more focus is needed. 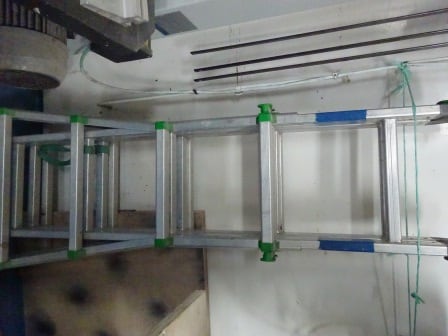 All Ladders are tested and then marked with the color of the year, such as blue in this case. When not in use they are tied to the bulkhead so they cannot fall over when the ships moves and thus not cause accidents.

We even have a yearly ladder testing program, so we can weed out the old and the broken ones. With roughly 200 ladders on board in various sizes and shapes not an unnecessary routine. As we have over 800 very inventive humans on board of which roughly 600 will have to reach for something which is higher than they are, it is an area where constant focus is needed.  So the program is train, observe & correct, verify, retrain and audit. All to ensure we will not have any crew accidents. The crew of the Zuiderdam does quite well with the accident count and that is good for all of us, not for the least the medical department as it remains quiet then in the medical Centre.

I am nearing the end of my short stay on board as tomorrow we are in Kiel and at 08.30 the agent will pick me up and get me to Hamburg airport. From there it is back to England and back to scaffolding and roof top maintenance…………. And there is also My Lord & Master with a honey do list which gets bigger and bigger ………. and so little time.   My blog might pop up again in a few days because if everything goes well, I will be for a few days on the Koningsdam for a quick review here and there to verify what I did there in the last two months was good and to see the christening at the same time. After that I have to attend a 4 day medical course followed by a 4 day fire fighting course to keep my Master license valid and then I should have a sort of vacation………… I hope.  What happens afterwards will depend on the needs of the Koningsdam and other ships so I will announce my schedule in due course.