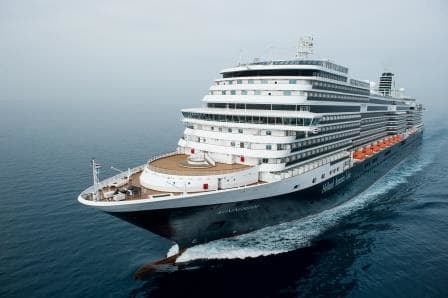 The Koningsdam at sea. Photos of her arrival can be found on the main page of the Hollandamericablog.

Due to its length, she swung around in the Waalhaven about a mile downstream and then went astern to the dock.  The days that the ships could easily swing off the WilhelminaKade are long gone as anything over 700 feet is a challenge. It would be a challenge some captains would not mind to take on but it would be a squeeze for a ship of just under a 1000 feet. Thus the longer ships swing on arrival or on departure and then have to go astern to the berth or from the berth. We had the chance to watch the Koningsdam while standing on the stern of the ss Rotterdam docked just south of the Cruise terminal.

The dedication of the ms Koningsdam was all concentrated on this morning with first poring of a glass of Holland America Champagne over the ships bell followed by the real dedication in the show lounge. Although the World Stage can take 600 guests it was not big enough to have all the invitees there, all the guests, and a fair number of crew as well. Luckily the Lido deck of the Koningsdam is two stories high so you can have a lot of people in there. What was not live to see for the various groups could be followed on screens and that worked very well. The whole operation was meticulously organized and flawlessly executed. 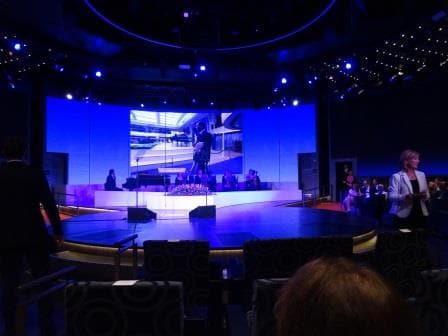 Queen Maxima arrives in the Lido. partly obscured by the Captain. which is correct as a gentleman always walk at the left side of a Lady.

Her Majesty Queen Maxima of the Netherlands arrived at 10.30 and first went to the Lido Deck for the Bell & Champagne part of the dedication. 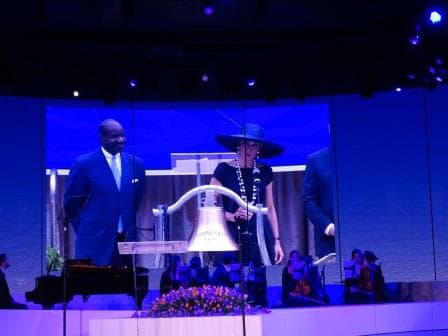 Queen Maxima, about to pour the champagne over the ships bell.

This is not the first time we have done this on a HAL ship. The Statendam of 1957 was christened/dedicated in the same way by then time Crown Princess Beatrix. The mother of the current King. This was done as the Statendam V was built in a dry dock and thus a traditional launching was not possible.  Not a bad reason to keep this link with the past, as it flowed over into the current day. Not only for the bell but also for the old Statendam name. 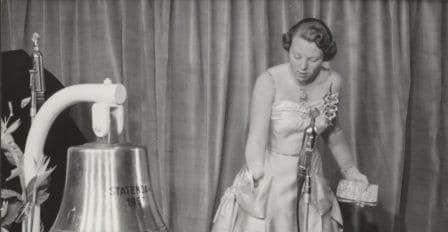 A link with the past. Crown Princess poring champagne on the bell of the Statendam IV.

Orlando Ashford our president announced during his speech in the World Stage that the new name of the sister ship of the Koningsdam would be the Nieuw Statendam. The idea and logic behind this was to continue a traditional company name while at the same time indicating the future of the cruise business. 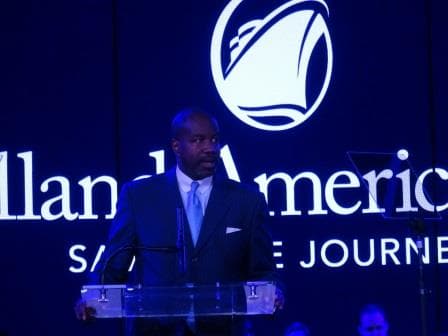 Hence Nieuw Statendam.  I do like this, as the name can be pronounced by everybody without having to deal with a Dutch tongue twister and still give a modern twist to it.

While in the Lido the Queen was also asked to sign the “Wall of Fame” which should eventually have the signatures of everybody who was on board today. As a result there were long lines later in the day which lasted until late in the afternoon. The panels will eventually be placed in the ship and remain there. Again a link back to the past as the same was done when the Nieuw Amsterdam (IV) came into service in 2010. 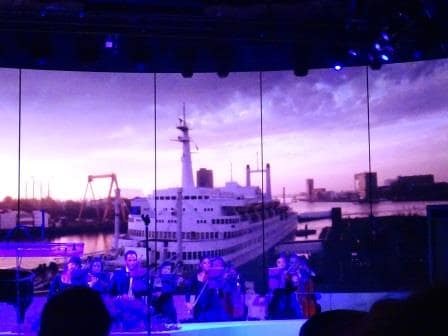 A short movie about the port of Rotterdam which also included a shot of the ss Rotterdam V.

From the Lido the Queen was escorted to the World stage for the official ceremony. For reasons unknown to me, I had about the best seat in the house and an almost straight view onto the centre stage hence I can now put my own photos on line. A small orchestra played an intro while on the back screen a short movie played about the city of Rotterdam. This was followed by the National anthems of the Netherlands and the USA in a classical orchestration. 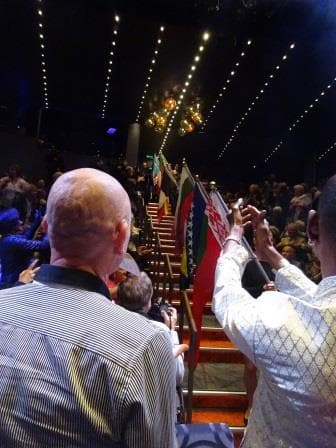 44 crew with their nations flag coming down the stairs.

With the limited space available not too many crew could be present but this was solved by having 44 crew marching in (and out) each with the national flag depicting his or her own nationality. Currently we have 44 nationalities on board although of some of them there is only one representative on board and thus that one person “was volunteered” to represent his or her country. But…………. Who would even think about refusing even if the rehearsing went on until the deep of last night. The final two flags were from the Netherlands and the USA both carried by a Lady crewmember. 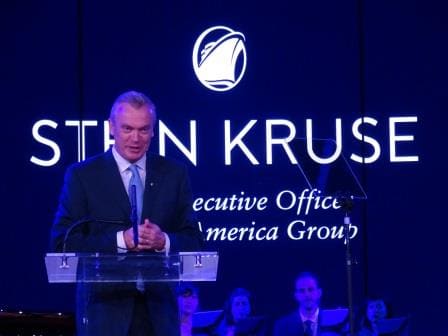 Mr. Stein Kruse with a few words of welcome to the Queen and all others present. 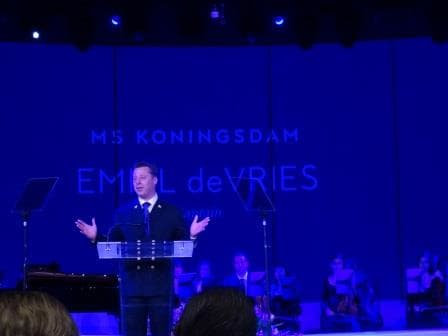 Captain Emiel de Vries with his appreciation for the day.

Captain Emiel de Vries expressed his appreciation of having everybody present and having the honor to be on the ship from building to Rotterdam and now up to Norway and following. This was followed by a Dutch harpist who provided an intermezzo. She was some years ago the winner of a contest in the Netherlands and showed that a combination of being a good singer and a good harpist is a very viable possibility. 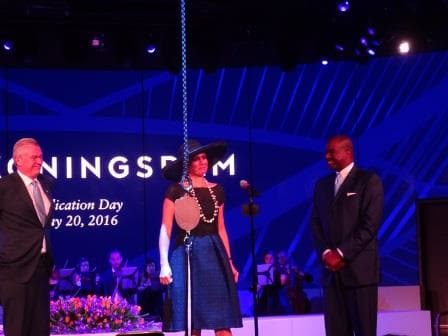 Her Majesty the Queen about to pull the cord which releases the champagne bottle outside the ship.

Then came the highlight with the official dedication/christening. As the Queen was in the lounge, the issue of releasing the bottle was solved by pulling a rope in the lounge which gave a signal to a release mechanism outside and then the bottle smashed in accordance with the requirements exactly at the right moment against the hull and broke. This could then be seen again on the big screen in the show lounge and also in the rest of the ship and even on the dockside 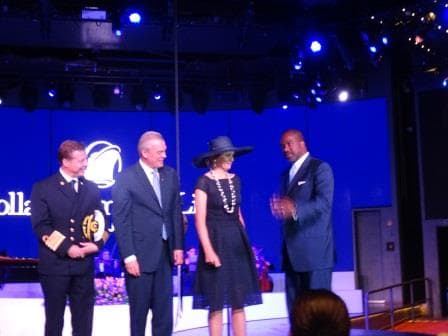 By 11.30 the official ceremony was over and Queen Maxima left the ship shortly after being given a farewell on the ships whistle.  All on board where offered champagne and were left to carry on enjoying the day on board or ashore.

Tonight the ship will sail at 20.00 hrs. stop briefly at Hook of Holland to watch the fireworks and then continue to Amsterdam where we will dock tomorrow morning. For those of you, who would like to see the whole ceremony, please go to the HAL website.

My apologies for the blue colors in the photos, it has something to do with the lighting of the stage.