We are here during a Russian Holiday; of the 9th of May, День Победы Den Pobedy, which translates in to English as Victory or Liberation Day.  As there were gun salutes, fireworks (and it was nice weather) downtown St. Petersburg was heaving and the crew who could went ashore and had a great time. Some only came back very late in the night or early in the morning.

In the port it was very quiet. Whatever you say about Russia, they are good at security and The Marine Façade Cruise terminals are devoid of anything which does not belong. Apart from the Russian military using the beach nearby for a pre lining up for the parade, we did not notice much on the ships of what took place in downtown. This holiday is by far the most important one for the country as Russia still remembers the 2nd world war very vividly; as they were most likely the country that suffered the most as far as human sacrifices are concerned. So with even WWII so far in the past, it is still a very big thing.

I promised to explain why St. Petersburg pilots speak Dutch, sort off. It has all to do with Czar Peter the Great. He wanted to turn Russia into an international power and for that you needed a fleet in the 16th. and 17th. Century. Thus he himself went to Holland to study ship building and carpentry. Dutch was also the world language at that time and thus all he learned with his group of people was learned in Dutch. All these nautical terms he took back to St. Petersburg and the terminology was eventually absorbed into the Russian Language.  Through the decades some words got a Russian twist but in general a lot is still recognizable. If you talk to the skipper or captain of a Russian sailing ship you will find out that all the names of the ropes and sails have a Dutch origin.

Thus also the origin of the St. Petersburg Pilots. As mentioned yesterday we had to sail through a long and narrow channel to get to the city. It was already long and narrow (and very shallow) in the days of Czar Peter. Thus the need for good pilots was clear. Also here the Dutch got involved and the history lingers.  The local pilot is called a Lootsenman, Loots (nowadays spelled as Loods) is the Dutch name for a pilot. The pilot man or Lootsenman is the old version.  Also the Dutch nautical sailing terms came to St. Petersburg.  Starboard which is nowadays Stuurboord in Dutch, was Starrebord in those days and here it still is. Port which is Bakboord in Dutch lives on here as Bakkebord in the local pilot’s language. And so on and so on. If a Russian pilot speaks slowly in his VHF, then you can quite well follow the conversation as long as it is nautical. I never knew this, until I came to St.Petersburg as captain of the old Noordam in 2001 and the pilot introduced himself as the “lootsenman”.

Today the pilots were a little bit busier than yesterday as instead of only one other ship in the port there were two. The Marco Polo had left and was replaced this morning by the Aida Mar and a Costa ship. That still leaves room for three more ships and thus the cruise port did not look full at all. This will change in the coming weeks when the cruise season goes into full swing. Some cruise ships are still on their “migration” cruises on the way over from North America or coming up from down under. 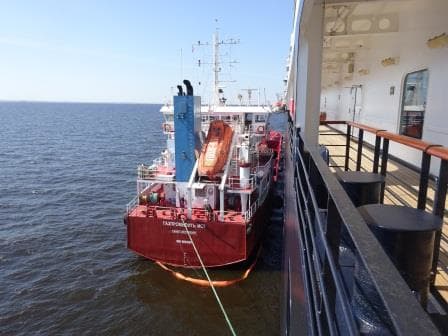 The fuel tanker Gazpromnef East. It has one of the modern enclosed lifeboats at the stern which are launched onto the water instead of lowered.

While we were docked yesterday we refueled the ship by means of a bunker barge. While in North America they use mainly Barges, in Europe the preference is a small ship. Sometimes large river boats as in Holland but sometimes sea going coasters which can be quite big. We had alongside one of the biggest bunker ships I have seen thus far. Listening to the beautiful name of Gazpromnef East, it brought sufficient fuel to last us for our next round trip. It had a capacity of much more than we needed and what we could ever hold in our tanks. The ship arrived at 10 am in the morning and departed again at 8 pm. in the evening. Which is quite a long stay but our experience is for Russian bunker boats not to have the pump capacity of what is standard on American barges. And if you can only pump just over 100 tons an hour, while we are used to the American standard of over 400 tons, then you get a prolonged stay. But as we had an overnight stay, who cares………………….. 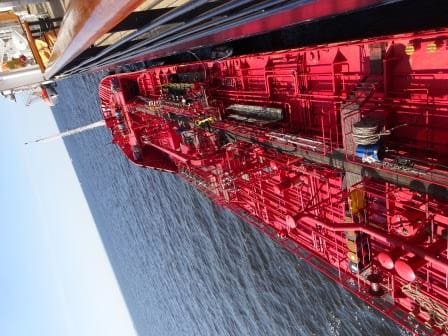 Lots of Tanks and pipes with in the middle a manifold which guides the bunker hose into the ship.

We will sail tonight at 18.00 hrs. and should have a sunny sail by the navy base of Kronstadt about 15 miles away from the city. Here we also have the flood barrier which was built not too long ago and which protects St. Petersburg from flooding during the winter storms.

Tomorrow we are in Helsinki and we should keep the same weather as we have today. Very nice weather, sunny and not too warm.