St. Petersburg means is a very early arrival to facilitate the full day tours. Such an early arrival is possible because the sun rises quite early in this area making it easy to sail through the narrow approach channels. This early morning saw little wind and little wind is a blessing because the channel is really narrow. Marked out and dredged in the days when ships were no wider than 15 meters / 45 feet and that left ample space for opposing ships to safely pass by. Now the cruise ships are 32 meters wide or even wider and thus the channel is suddenly very narrow. When big ships are coming in, the port authority establishes one way traffic and thus only opposing traffic can continue which can sail outside the buoyed route. For a large ship those buoys which marks both side of the channel are very close together and get even closer when the wind blows. 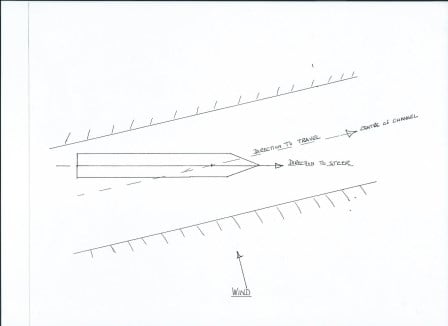 The more the wind is on the beam and the stronger that wind blows, the more the ship will drift in the channel (Courtesy diagram www.captainjonathan.com)

If the wind is on the beam, it pushes the ship over and to stay then in the middle of the channel a ship has to steer against the wind. Steer a drift course. The slower the ship goes, the wider the drift angle becomes and the more sideways the ship goes through this channel. The “path wide” as we call it becomes wider. And with our floating apartment buildings, we can catch a lot of wind. The faster we travel the less wide the path width is, as the increased speed force and the wind force combine into a final direction which will become closer to the course line in the center of the channel, the faster the speed is. Logic would thus be to race through the channel at maximum speed. But that is not possible as the depth of the water is too shallow. There is squat. = The sinking in of the ship which increases with the speed. (Just look at a speed boat. The bow comes out, the stern goes in because the propeller digs into the water and that is called squat. An extreme form of squat but the principle is the same for large ships) 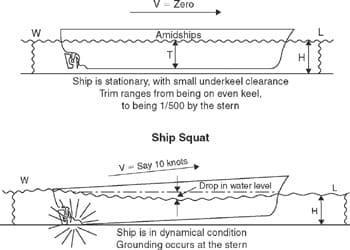 Squat: the sinking in of a ship by the stern due to speed. (Diagram courtesy www.globalspec.com)

When the ship sinks in, it increases the draft considerably; an extra 40% during full speed is not un-common and if the water is very shallow then you bump the ground. Even when this does not happen, it reduces the space between the sea bottom and the keel so much that it gets harder for the sea water to flow away. This increases resistance, which slows down the ship. Thus even if we were allowed to go full speed in the St. Petersburg channel which only has a depth of 35 feet, with a 23 feet draft and a bit of squat there would not be much left and the ships speed would reduce drastically. As the engines would still try to churn out the maximum- Sea – speed power asked for, this power would force the ship against this reduction of water flow. The flow is reduced, the propellers push, and the result is that the force has to go somewhere else and does it by letting the ship shake. And that shaking can be considerable. Every captain knows that if his ship starts to vibrate and there is nothing wrong with the engine and he is in shallower water, then it must be squad and he will reduce speed until the shaking stops. We call that “Honeymoon Speed and After………………… 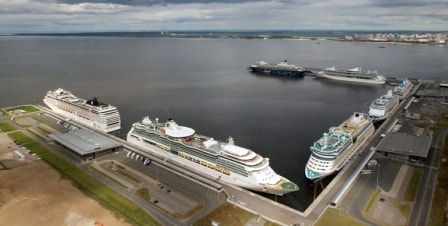 The Marine Facade which can handle 7 cruise ships. We are docked in the far corner where the blue ship is (Photo courtesy www.portnews.ru

The Zuiderdam had to be early this morning to be in time for the one way convoy and to be able to travel with a sedate speed of 10 knots for 2 hours through the channels. Plural as in channels, as there are more than one. When coming closer to the city, a large cruise ship makes a turn to the North to go to the new cruise terminal called the Marine Façade. This has been purposely built and has 7 cruise terminals. Very small ships, up to 16,000 tons or 500 feet can go up the channel further in and dock at the Lieutenant Schmidt embankment, quite deep in the city.

We were today in port with the ms Marco Polo of CMV cruises. Built in 1968 as a Russian North Atlantic Liner it must now be one of the oldest cruise ships still in service. Cruise and Maritime Voyages is an English company which operates Three Star cruises for the British Market. The ship is manned by Ukrainian Officers so I would not have minded to have been on the bridge there this morning to see the interchange between a Russian Pilot and a Ukrainian Captain, given that the two countries are having issues with each other at the moment.

We are staying here over night for a 2nd day tomorrow. Then a little story about why St. Petersburg pilots speak Dutch. (Sort of)