We approached Tallinn this morning with a Gulf of Finland that was completely flat and with the sun shining brightly. That always scares us as it gives a good chance for –very low hanging clouds- but it is still too chilly.  So we had a grand approach and an even grander day. 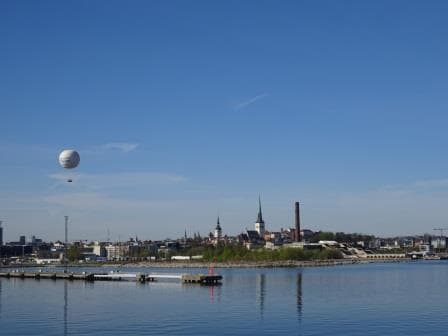 Approaching Tallinn with a ball in the air.

Tallinn has a nice sky line with walls and turrets which can be seen from quite far away as the city is sitting on a sort of hill. To the west are the leftovers from the Russian days with several grim looking buildings and an area which is now part of the navy museum. There is another mercantile museum in one of the old towers in the town. Very worthwhile visiting and it has a great bookshop. 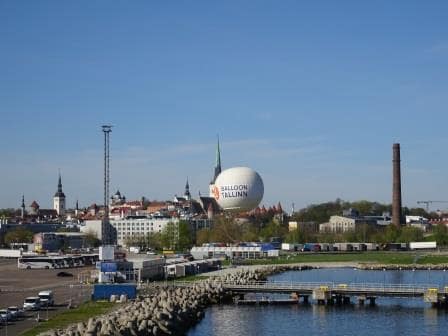 Since about five years ago the city has two long cruise piers located outside the old harbor. Here we used to dock at that time but there are only three berths available and only for not too big a cruise ship. The rest of the docks are given over to the Ferries which sail with great frequency to Finland.  Estonia, although on the other side of the Gulf of Finland is much more related to the Finnish culture than to the Russian one which surrounds the country on three sides. For the Finnish people it is considered a short holiday if they hop to and from Estonia and at the same time they can pick up some duty free; as prices for alcohol are very high in Finland. To ensure ferry captains and cruise ship captains do not scream at each other all the time, and to get the mega liners in, there are now two big docks. 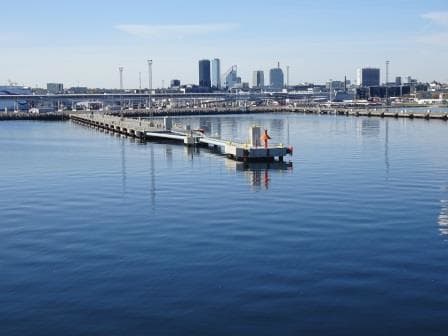 That is what can get a ships captain really excited. Long pier, good fenders, plenty of bollards to put the ropes on and friendly linesmen. Thank you Tallinn.

When we approached the dock we saw something we had not seen before. The Tallinn Balloon. First we thought it was a blimp hanging over the city but then we found out it was for sightseeing as it went up and down every five minutes. Under it hangs a Gondola and it must give an amazing view of the old city and the port when being up in the air. Some of the crew was going to try to visit it this afternoon, so hopefully I can get a photo. I was not able to get off the ship as I was creating mayhem today with organizing and assessing an un-expected Emergency Response Drill. (Read = complicated fire drill) We have to do these on a regular basis to avoid the crew getting into too much of a routine and un-expected means it might be real and that will get the adrenaline going. It is then up to the captain to have the crew running but at the same time not upset/scare the guests by making the scenario too realistic. But that can be managed by announcements and a good explanation.

Another challenge we face is when we do these drills in port. Crew is also entitled to time off and that means we do not always have everybody on board and that includes not having complete fire teams. For that we have a procedure which is called “In port manning”. The crew has to take turns in staying on board. For the officers this is 50%, so we always have two fire teams available and every key position can be manned. Not only for Deck and Engine, but also for Hotel. If the Hotel Director goes ashore, the Culinary Operations manager has to stay on board.  For other hotel crew it goes in percentages and these are based on what functions we need. Thus we always have enough crew onboard to lower all the lifeboats which are at the water side and we have enough Stairway Guides to direct people in the staircases. Either to the lifeboats, or ashore, or back to the cabin; whatever the emergency might call for.  Our crew is not always happy with that, especially if you lose out on a nice port like today, but such is life. You do not have to be a sailor but if you want to be one, then you have to embrace the safety part of your job as well.

We stayed from 10am to 5pm in Tallinn which is really too short but the choice is either two days Tallinn or two days St. Petersburg and I am not going to say what is better.

Sailing to St. Petersburg is also an interesting affair as the city is located behind a very shallow river delta. Hence we have to sail quite a distance through a Canal before we can come to the dock. We will be docking at the new cruise terminal area as only the very small cruise ships can go up the embankment and into the city.

We are expecting another beautiful and sunny day with temperatures around 68oF. / 20oF which is very good weather for sightseeing. Although for St. Petersburg I prefer a bit more cloudiness to take the glare away.