Warnemunde is a port where we stay a little bit longer to make the tour to Berlin possible. At the same time it gives the Cruise Director the chance to get local entertainment on board. THis means a local Brass band, which we call in Holland an Oompa – Oompa Band, due to the constant underlying sound of the Bass-Tuba. Thus we had a group of about 8 gentlemen sitting in the Lido playing local dance and drinking music (with the emphasis on the last part) and with one gentleman singing the local tunes. Guests were encouraged to buy the local beer and that suggestion was followed up upon quite enthusiastically. A few gentlemen remembered their army days in Germany (And made their wives wonder what they had been getting up to, while being there in the army…………….) This Band probably had to drive home as their personal beer consumption was quite slow. 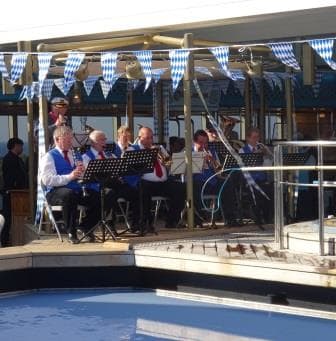 The local music band. The Gentleman standing in the back was the singer.

I once had a band on board the Prinsendam for the sailing through the Kieler Canal and they managed one glass of beer for every tune they played. I am sure they did not drive home, unless it was by coach.

Sometimes I have to laugh about what the company dreams up for show displays and what we do to generate the focus and interest of the guests and thus we could see the Bar stewards walking around with Foam hats styled as Glasses of Beer. There are moments in life when I am quite happy to have decided to become a navigator……. 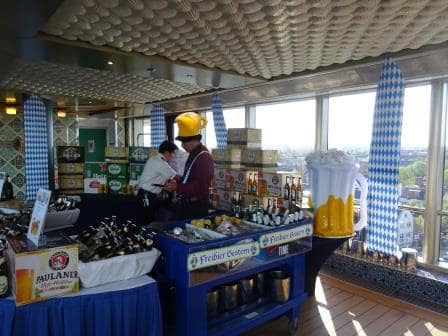 If you want to sell a lot of beer, put on a silly hat and the rest goes by itself.

Navigating came later when the Zuiderdam departed from Warnemunde. Heading East to Tallin means crossing most of the Baltic Sea and that is done as much as possible in a straight line. However Mother Nature seldom makes a sea’s square or oblong, or does not put an island in or reefs in it, or anything else which requires the attention of a navigator. Thus the Baltic is quite a complicated area. On our cruise we (try to) stay on the South side when going East until we reach St. Petersburg, which is also the end of the Baltic. From there we stay on the North side while heading west while visiting Helsinki and Stockholm. Then we come south again to go to Kiel and by the time we have done that we have also made a full circle of the Baltic Sea. 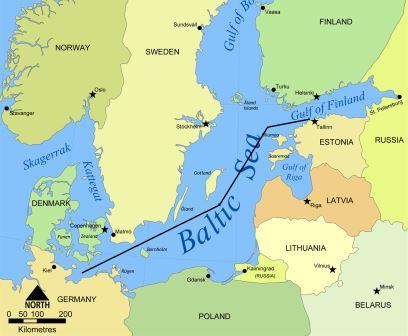 The real problem with the Baltic Sea is it is very shallow along the coast line and thus you have to go fairly high up towards the center of the Sea and to make it interesting there are a few islands right in the middle. Also what we call the Baltic really consists of three parts, the Baltic Sea itself, the Gulf of Finland (the area between Tallinn and St. Petersburg) and the Gulf of Bothnia, which is the area which separates Sweden from Finland. It is only in the Gulf of Finland where we really can stay on the South or on the North side.

The first island of interest after leaving the German coast behind is the Island of Bornholm. It is fairly close to the Scandinavian coast and a place of interest to the seafarer in the old days. If the weather was too bad to continue sailing, ships would seek shelter or refuge behind the island, the side depending on where the wind was coming from. In nautical language “laying behind Bornholm” became a general saying to indicate that a ship was waiting better weather in a safe area.  Even in the modern age, smaller ships still do so, as it is much safer than to charge against the heavy waves which a storm in the Baltic can generate. Today we had beautiful weather and thus we were keeping as much to a straight line as possible and sailed between Bornholm and the Swedish coast.

The next island is Gotland with as main town the port of Visby. Here the Baltic Sea is getting much wider as the mainland with Latvia and Lithuania veers away from the Scandinavian Peninsula. Visby is also a well-known tourist destination and many cruise ships call there. The small ships can dock but the large ones have to anchor as the main docks are for the local ferries. However they are now in the process of constructing a large dock and that will make it possible for the larger ships to come alongside and not having to rely on tender service. This island we can keep on our port side and from there we follow the south coast and head for Tallinn.

We expect to be docked there at 10.00 hrs. We will be together with one smaller ship, the cruise ship Minerva which is known to offer really in-depth cultural cruises. They say of that ship that the library is larger than the show lounge. Weather: another sunny day with temperatures around 68oF or 20oC.