And thus real life started again as I boarded the good ship Zuiderdam yesterday in Quebec. The Zuiderdam is too tall to go under the bridge just north of Quebec and thus cannot make it to Montreal and hence stays 2 days in Quebec. Earlier this year I was on the Zaandam and that ship does fit under but only with normal water levels. At Quebec the St. Lawrence River is still tidal and with high water spring and/or heavy rain fall or melting snow upstream, the water table can also be too high for the R class or even the S class. The Zaandam also had to do a turn over at Quebec in the beginning of this season before the river level dropped sufficiently and the ship could make it to Montreal. For the Zuiderdam there is no option at all and thus the ship stays in Quebec. Not that many people will be complaining as Quebec is one of our highest guest-rated ports. Thus I could board yesterday in Quebec and today the ship was still there as today is turn over day and the ship starts a new voyage. Voyage 693 to be exact.

I was quite happy to join in Quebec as the company put me up in Chateau Frontenac on top of the hill overlooking Quebec harbor. I had never stayed there as most of the time I either joined or disembarked in Montreal when in the area. I had visited the hotel once and had then received the “grand tour” behind the scenes and was taken all the way up to the rafters of the middle tower which was the latest addition to the Hotel. Going behind the scenes on private account (our local agent knew somebody, who knew somebody who could do that) was right up my street as this Hotel together with a string of other and similar hotels had been built by the Canadian Pacific Line around 1890 – 1905. So climbing to the inside top of what I consider Maritime history was a high light. But the back of the house tour took so long that I did not get the chance to walk through the chandelier lighted public rooms and nose around on the various floors. Now I had the chance and thus I did. Wonderful oldie wordlie place but modern as well with nothing lacking. Brass, mahogany and crystal, what more can you ask for. 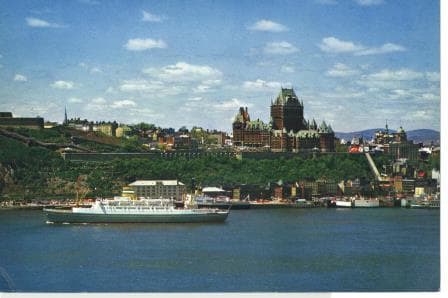 The ss Ryndam of 1951 passing by Quebec and Hotel Frontenac while going towards Montreal.

Holland America has been sailing to Quebec and Montreal since the 1950’s when the emigrant trade from Europe was much more focused on Canada than before the 2nd world war. Now we do the same thing again but with cruises. And each cruise we have several guests on board who came this way 40 to 50 years ago with HAL up the same river to start a new life. While they went upstream, we are now sailing downstream with an 11 day cruise which will end in Fort Lauderdale on 20 October. After that the 10 day Caribbean winter circle cruises will start again, the same as the ship made last year. I will remain on board until 24 October in Willemstad after which I will transfer to the Koningsdam.  I am here on board to give some support with compliance verification and training and do some of my regular things including mayhem during drills. 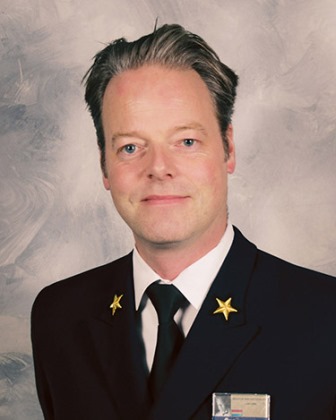 Current Master of the ms Zuiderdam is Captain Wouter van Hoogdalem who came up through the ranks with our company and has thus been with us for a long, long time. On this cruise we will call at Charlottetown, Sydney, Halifax, Portland, Boston, Newport (RI), New York and Ft. Lauderdale. This is the last cruise of the company to Quebec as it is expected that the winter will set in soon. Although at the moment it does not look like it as Quebec, yesterday and today, was at its best with glorious sunny weather. No wind, sunshine all day and with temperatures of around 60oF / 15oC.

Unusual is that we are docked in the side port of Quebec and not at the cruise terminal in front of the city. Unfortunately all goes by size nowadays and an “Apartment of the Seas” much bigger than us has the top spot. We are in an industrial corner of the port but they are building a new cruise terminal here as cruising to Quebec is booming. Although our view is not that great, it is only about 15 minutes to walk to reach the lower town of Quebec so it is not so bad. 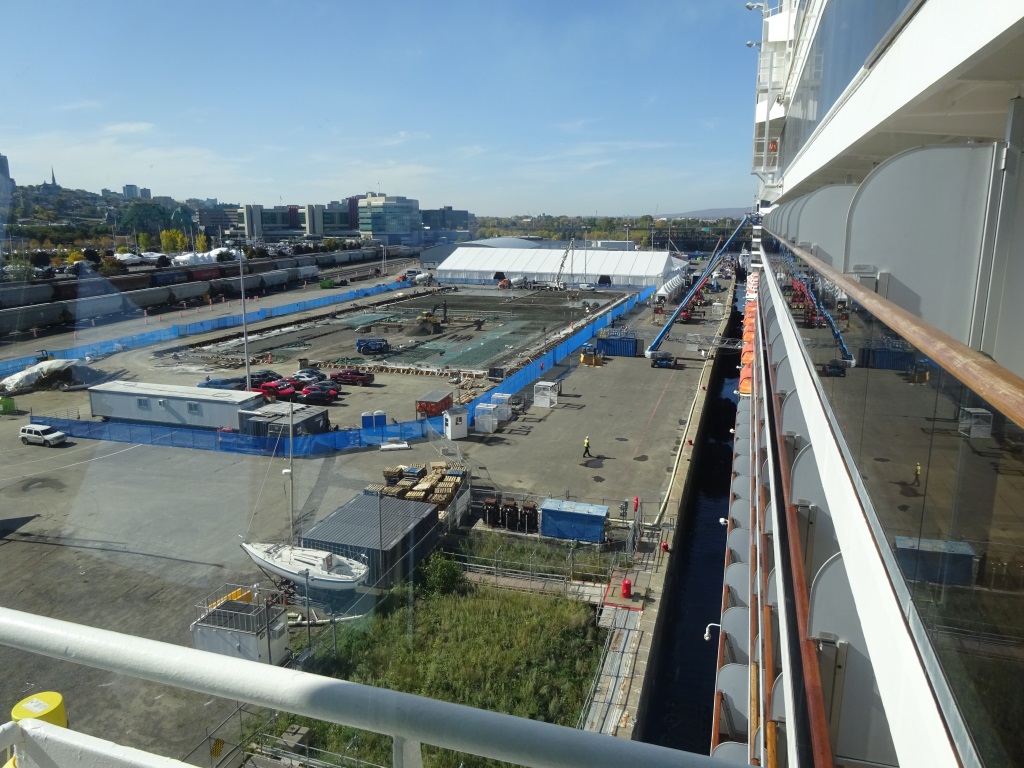 The new cruise terminal under construction. For the time being we are using a Marquee assembly, seen in the back.

Tonight and tomorrow we will sail down the river and then into the estuary of the St. Lawrence River before reaching Charlottetown on Prince Edward Island. Weather for tomorrow: Partly Cloudy and with temperatures around 50oF /11oC. That is very good for this time of the year and Charlottetown looks even better.