Today we spent the whole day at sea and for most of the day we could see Canada on both on sides of us. Yesterday afternoon we sailed from Quebec at 1700 hrs. and for the first 3 hours we had some beautiful views of the autumn foliage on the river banks; one of the reasons we are here. 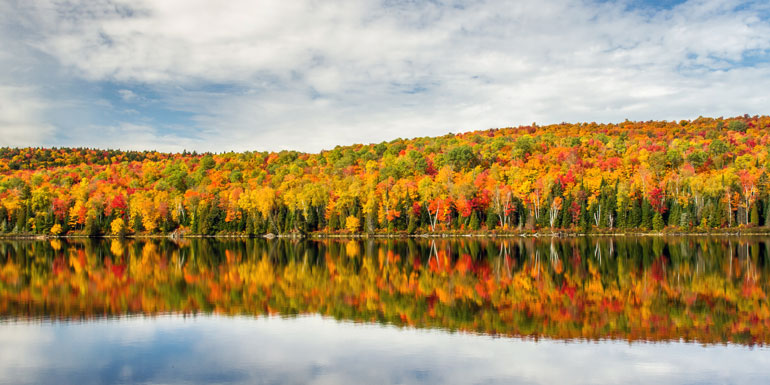 Holland America Line stock photo.  But this is roughly what we saw on departure. Just less dense.

Once autumn really arrives and the trees start changing colors, there is a riot of red, yellow, auburn, dark brown to be seen while the tree trunks remain green. If you can see it, it is very beautiful. But there is always a gamble. If the area has a good Indian summer then the temperature remains relatively high and then white clouds descend down to the water and the guests only see something while in port when the fog burns away. Now we have been lucky that the temperatures remain at all times under 16oc/61oF and that seems just low enough to keep good visibility. Unfortunately it is late in the season so by 8 pm. it is dark.

Today the weather was as nice as yesterday with lots of sunshine and little wind and we sailed with low speed as we are in the area of the Right Whales again. I blogged about this before in the beginning of the season that the ships schedule could be quite affected by whale sightings. There are only about 400 Right Whales left in the world as they have almost been hunted to extinction. They were named by Whalers to be the “Right” whales as they were so easy to shoot and also because they did not sink after having died from the harpoon. In our opinion they are also not very clever as they do not react to anything around them and thus the small populations that still exist in a few places in the world are constantly under threat from outside influences. On top of that, they only reproduce very slowly and even with all the protective measures in place the numbers do not increase very quickly. Thus the Canadian Government has assigned large areas designated as safe havens in the St. Lawrence Estuary. The whole area is monitored by the Canadian Coastguard and as soon as one sighting is reported, a slow speed rule comes into effect and ships have to slow down to under 10 knots. This time the order came out 4 days ago as there had been several sightings. Hence we sailed for most of the day with a speed of 9.5 knots. 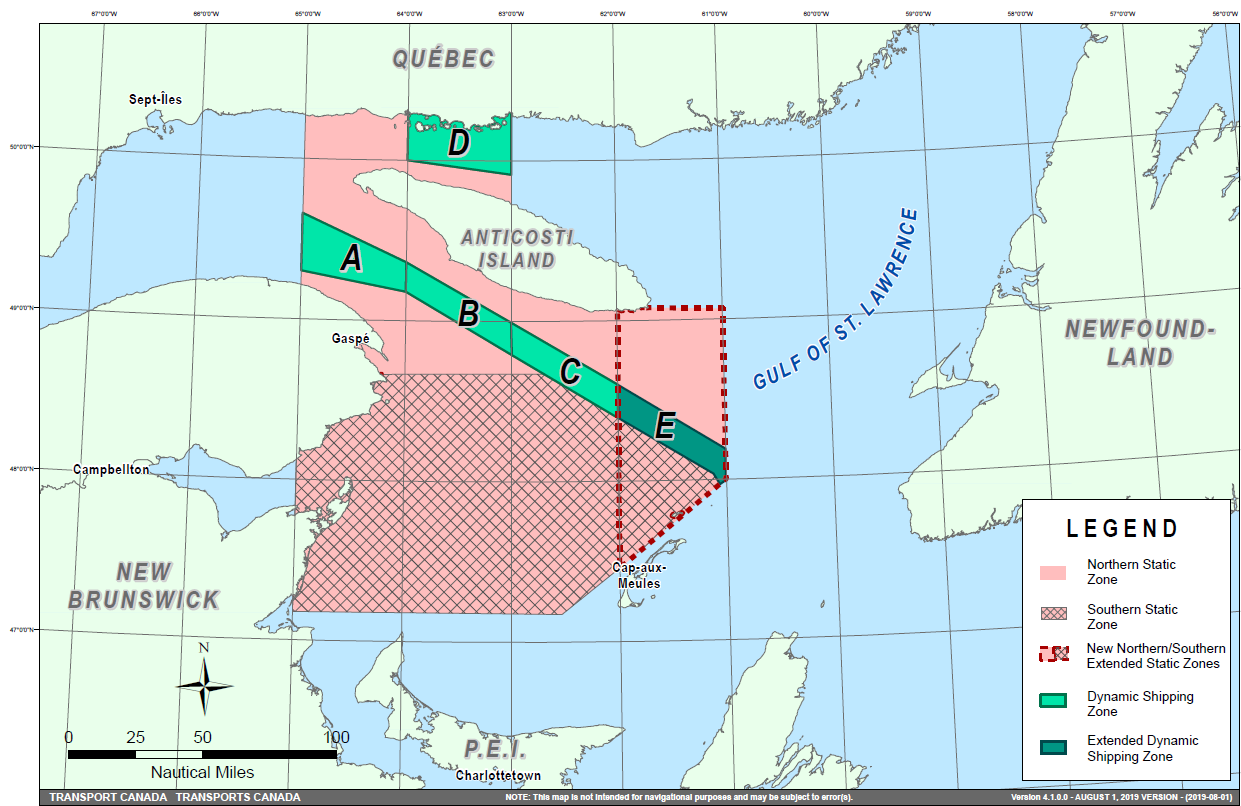 We on board are all for it but it makes it sometimes a bit difficult to keep the schedule between the ports. And thus we might have to leave a bit earlier and arrive a bit later than we were used to in the past. But if it helps the whale population then we do our best and the lookouts on the bridge become extra vigilant to ensure that no animal goes unreported. Most of our Lookouts have built up such a knowledge of the various whales that they can report what sort of whale we are dealing with just by looking at the spout or the way a fin comes up and dips again. And that helps again with taking the right counter active measures. 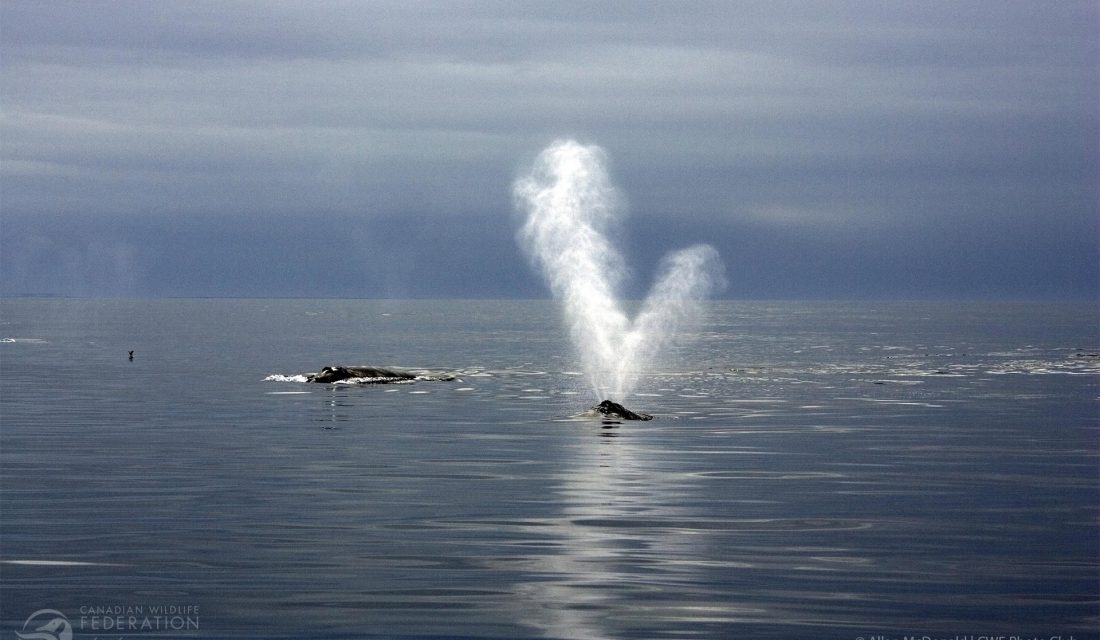 The Right Whale has a very distinctive spout and our lookouts pick them up quite easily. (Photo Courtesy from the internet, ascribed to Mr. Alan Macdonald for which my thanks)

The whales here stay mainly in the open and thus the restricted speed areas have boundaries and that means that during the evening and night we can speed up again if needed to make Charlottetown on Prince Edward Island (PEI for a short) on time. “On time” is relative as it is the time that the captain has decided upon due to whatever restrictions there are in force. Hence you see less and less arrival and departure times mentioned in cruise brochures. Because of these underway happenings as the Right Whale areas. In the old days it was often stipulated that the ship would arrive at 08.00 hrs. and then depart at 17.00 hrs. Now we arrive in the morning and leave in the afternoon. The best solution as our brochures are printed about 18 months before sailing date and in those 18 months a lot restrictive regulations might have come into effect. 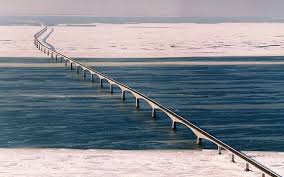 The next challenge we have, although it is one which we can plan for as it will never change, is that we can only approach the island from the East side. On the West side is the Federation Bridge (*) and we are too high for that. In the olden days with the Westerdam (II) we fitted it under it and that saved considerable time; although it would greatly increase the blood pressure of the Chief Engineer as  the area was and is full of lobster pots and they were most of the time more in the fairway than out of it.  Lobster pots are anchored to the sea bottom and the (plastic) rope could easily get in the propeller shaft and then damage the seals of the shaft, causing oil to leak out. In those days we did not have environmentally friendly oil and thus if something went wrong, it would not be good.  We still do not like leaking oil seals but at least the oil that comes out does not affect the environment anymore.

(*) This is a very long bridge and the only solid connection between PEI and the Canadian Main land.

We should be docked early tomorrow morning at the only dock the port has, or better said had, as they were building a sort of extension when I was here in May with the Zaandam so it will be interesting to see have far they have progressed.

Weather: Partly Cloudy, 15oC/59oF and a gentle breeze. We better enjoy the day while we can as there is now nastiness brewing around the Cape Breton area, where we are going next.