We had very good weather for the time of the year and while in port the guests could see the trees changing color all around the ship.  With us in port and at anchor was the Norwegian Dawn and thus we had about 4500 cruise guests ashore to enjoy Prince Edward Island. Although only an island it is big enough to handle this number of visitors without it feeling too crowded.  And as the sun shone all day, the place should have been full with happy campers.

I am always happy to be docked here as being at anchor is very unpleasant. In the early days you had to anchor south of the port at an anchorage where the current of three rivers converged and the ebbing and flooding came by as well. As a result the ship was never laying still in the water but was constantly swinging around its anchor. Which is not nice for the tender service as the tender driver constantly has to re-adjust for where the main current is coming from and sometimes even had to deal with current eddies next to the tender platform. Now with good weather a 2nd ship can come very close to the dock and drop anchor there. There is not enough room to swing freely around on the anchor but due to Azi-pods the stern can be kept right behind the anchor regardless of the currents. One of the reasons all captains love Azi-pods as there is so much power and versatility. Hence the Dawn could anchor right behind us and did not have to tender more than a 1000 feet. 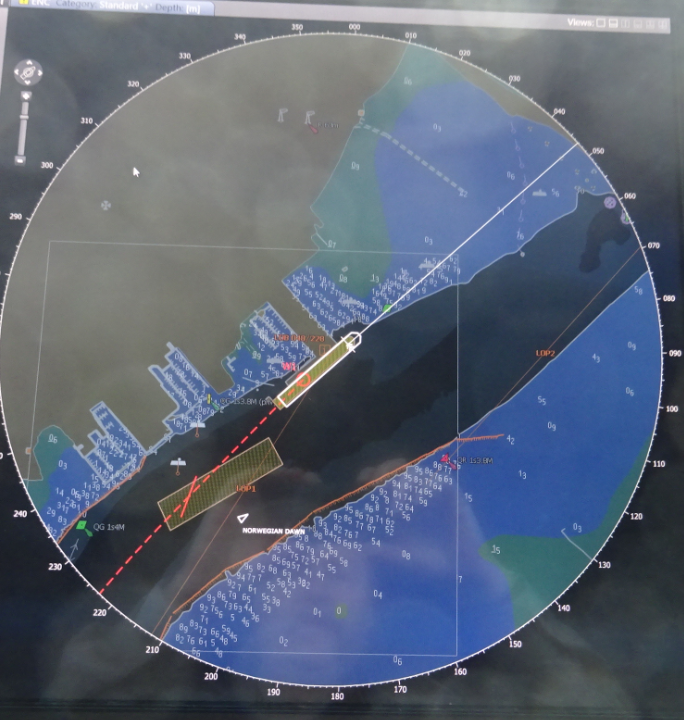 Our Electronic chart on the radar.  The designated spot for a ship at anchor is in the oblong box. But the Norwegian Dawn went a bit more to the south to give us room to depart before them in the evening.  With nice weather is is not a problem to anchor a bit closer to the mud flats.

The work at the dock has not yet been completed. They are now working at both sides of the dock and are installing extra dolphins so eventually very long and large cruise ships will be able to call at Charlottetown or having two medium size ships alongside. No doubt it will make the shop keepers very happy. Some very clever sightseeing bus operators have even imported a London Double decker Bus, a Road Master, from London. Wonderful to look at but somehow out of place as this port is not exactly London. Although riding an original one gives you a good indication of how small/tiny the English people were in the 1950’s. My wife and I once did a sightseeing tour of London with a Roadmaster and this was a bus where they served English High Tea during the tour which coincided with seeing the London Christmas Lights. Neither of us are very big but my wife was hanging half off the seat as the bench was so short. The funny part is that Charlottetown had a regular Double Decker service from 1965 onwards until 2010. Then the buses went back to London to be preserved but now there is one driving around again. 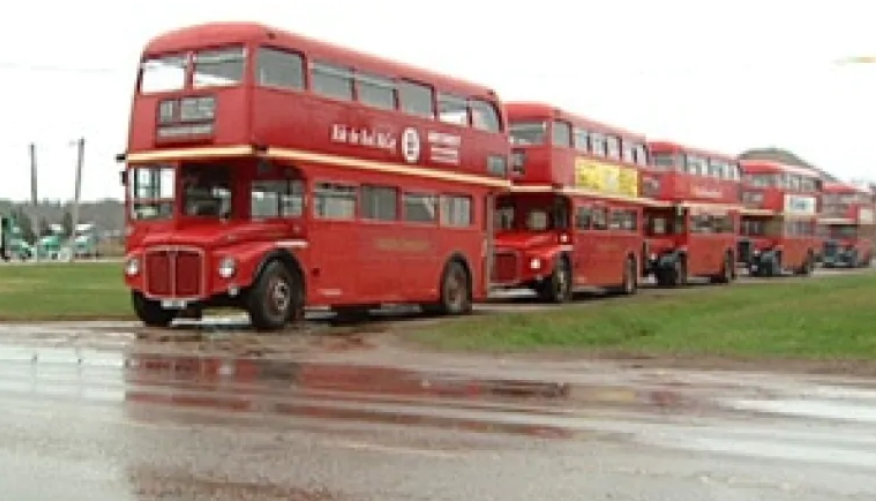 I pulled this picture off the internet. It shows the day that all the London Buses went home to London in 2010.

A very nice thing about Charlottetown harbor is that there is not much tidal movement. Today it was just over 3 feet and that is very low taking into consideration the distance from the port to the sea. Normally with an estuary port, the tidal ranges can be very high and there are several ports in the area such as St. Johns where it can go up and down more than 12 feet. For Charlottetown the trick is that a. the incoming tide, once through the gap, loses its momentum and can spread out over a large area and b. the constant flow of the 3 rivers here help dampen the effect as well. The rise and fall of the water level is exposed to a whole mixture of inter reacting forces and that is perfect for our gangway setup. Nothing is more irritating than having to shift gangways as many ports do not have floating docks (like Juneau has) or adjustable walkways as in Quebec which has a large tidal range as well. Even as far upriver as it is.

The captain and his team are now focusing on Sydney Nova Scotia, our next port, as the weather will take a turn for the worst. There is a weather system coming over with rain and wind. As we are docking in a very tight inner harbor (tight due to the shallowness of the river which forms the inner harbor) you cannot have too much wind otherwise you cannot dock. Luckily for us the wind is coming from the right direction (from the East to North East) and by the time we are going in, it will not be more than 16 – 20 knots. That will give us the option to still swing around on arrival and dock nose out. Later on the wind will increase to 25 knots, with almost 45 knots outside, but still from the right direction. Strong winds from the South West, mean that you cannot swing around and if you go nose in, you might not be able to leave as the wind will pin you to the dock or cause you to drift ashore when backing out.  Docking nose out, gives you the option to just give full ahead and charge out.  So we have hope that the weather gurus have it right and we can get in. For the guests it will be a rainy day but that is the “color locale” for Sydney anyway. It will not affect me as I am putting the ship on fire (simulated) tomorrow once we are docked.