We had a miserable and overcast day today and most guests, who were not on tour, did not venture any further than the cruise terminal where they could pick up a few local souvenirs or listen to fiddle concerts.  What was special was that I have never seen it so busy in Sydney, in all the years that I have been coming here with the ships. And that goes back to the early 1990’s we had a few visits here with the old ss Rotterdam. Today we had four cruise ships in. The Zuiderdam alongside, the Norwegian Dawn (who had followed us from Charlottetown) at the nearest anchorage, then the Riviera at the middle anchorage and far, far way a Silversea. The last one did not tender into the cruise terminal area but to a small local pier and had a shuttle service from there. The poor people of the Riviera (Oceana Cruises) had a long tender ride in the cold and the miserable rain. Although Oceana is supposed to be a notch better than Holland America (rated close to Seabourn) you had better sail with us, as at least we dock. Seniority rights do make a difference sometimes.

Sydney is following the example of Charlottetown to provide more docking space for cruise ships and they are building a new pier. Just outside the inner harbour where the old pier is, where we are docking at. Although old is relative, the pier has been greatly upgraded in the last few years and is a shining example of how a pier should have be laid out as far as bollards and dock space is concerned. The problem is that it is too short for the larger ships. 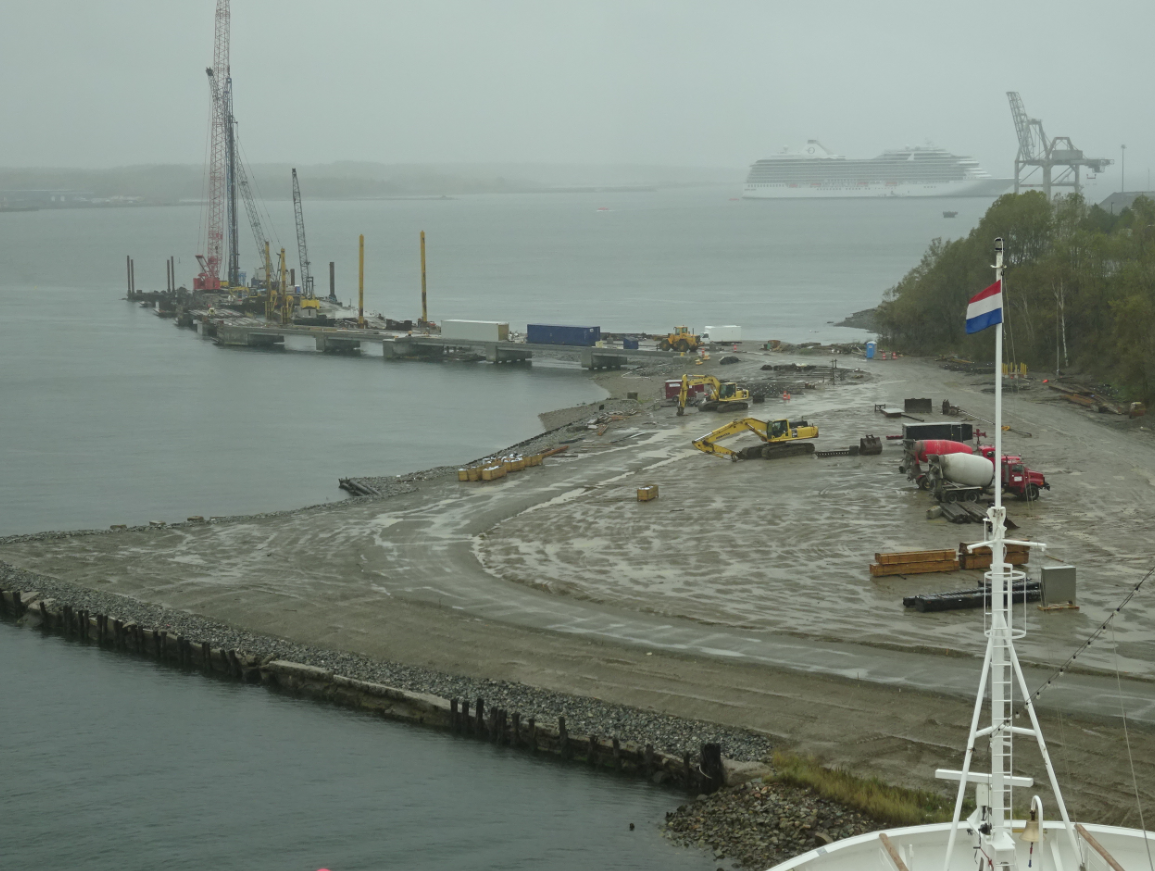 The new dock under construction. Far away in the rain clouds is the Rievera  at anchor.

Even the Zuiderdam, considered nowadays a medium size cruise ship only just fits in. They cannot really make this dock much longer without major modification to the surrounding land and thus they are building a second dock just outside. Just outside will mean a longer walk into town, but it will greatly increase the chance of docking if the wind is too strong to safely go into the inner basin. So by next year, there will be a plan B during windy weather; at least when you are the only ship in for the day. 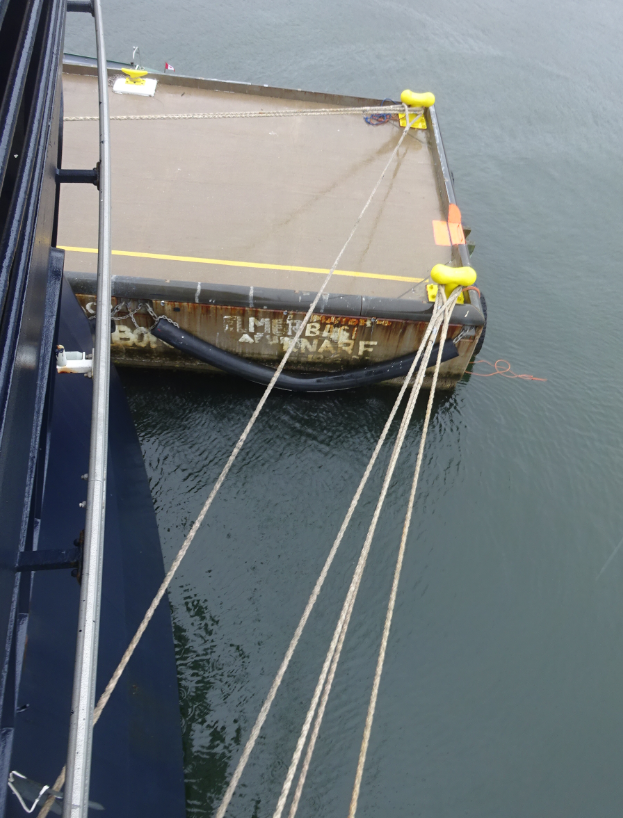 This is what a sailor does not like. Only breast lines. Fine for when the wind is on the beam (as today) but not when the wind blows against the stern. Then the holding power might not be sufficient.  So we need a longer dock…………………

Today we had cold, chilly and rainy weather an unfortunately we had a General Drill for the crew. So for a certain amount of time all the crew had to be on the outside deck to report to their boat and raft stations, to be accounted for and to receive a refresher training for their safety functions and the company’s safety routines. The Safety Schedule is made before the cruise starts and it is nearly impossible to change it as every day there is some sort of training and exercise going on; plus we are not allowed to lower boats in every port on our cruise and some ports, like New York are not really suitable as there is too much current around the docks. So Sydney it was, rain and all. 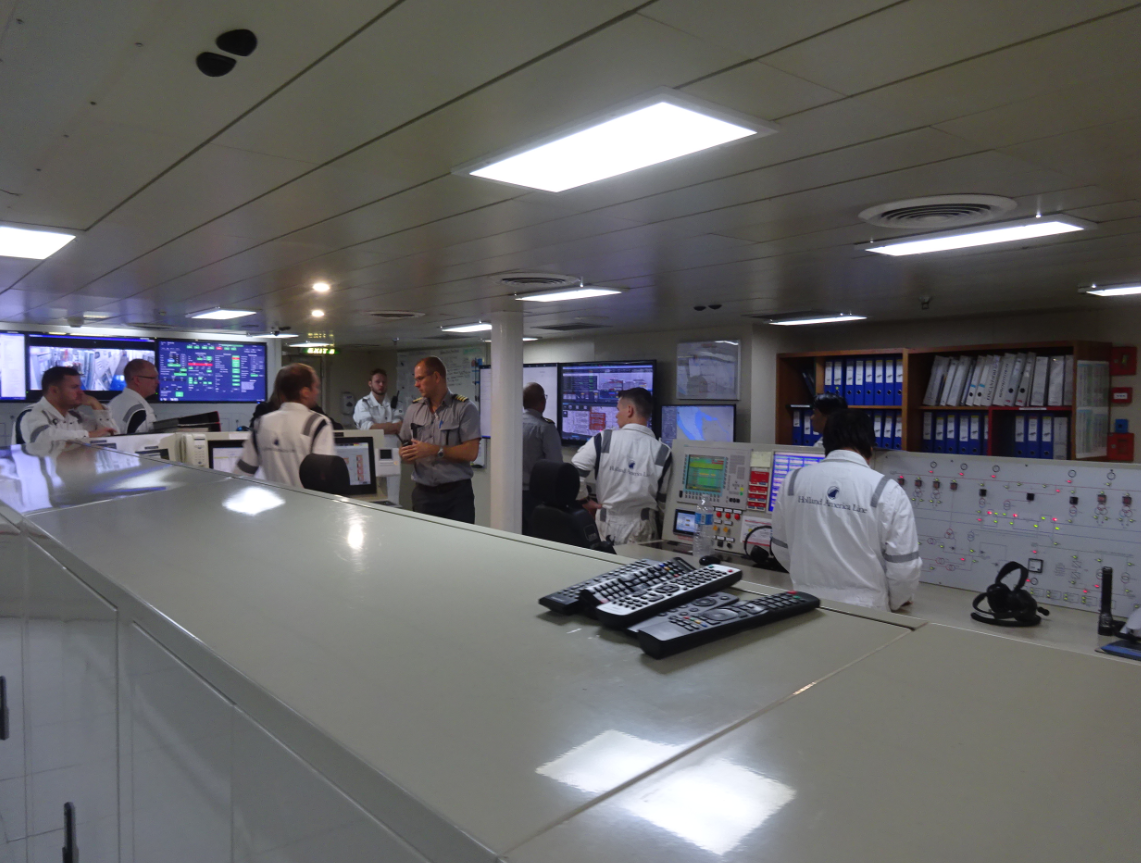 The engine control room during the CO2 evolution. This is not a one man show by the Chief Engineer, he needs a large team to ensure that all protocols are followed, everybody is accounted for, and the communication with the Bridge clear and extensive.

I organized today the fire drill, or the First Stage Response drill as it is really called as the emergency is not necessarily fire. It can be flooding, a major accident, explosion or anything else. So today the plan was to let the engine room go up in flames, which would then necessitate the release of CO2. This is a very effective way of putting out a fire but it is also a lethal gas as it extinguishes a fire by removing oxygen. So we have a large number of protocols that have to be adhered to, to do it quickly and safely.  The drill is basically the responsibility of the Chief Engineer as it is his engine room and he only has about 10 minutes to get the mental picture of what is going on, decide that other forms of firefighting do not work and then needs to confer with the captain about CO2 release. The most effective window of flooding the engine room with CO2 is within 15 minutes of a major fire developing (like an engine explosion). The longer you wait the harder it will be to get the fire out. The captain is involved, as he is the only one who can give the final approval, as it is his ship and if not all crew is accounted for, it is his burden to still decide yes or no. So accounting for the crew is an important part of the routine as it has to be done quickly and (hopefully) with a 100% response. Today the ship managed to do it all in 13 minutes by observing all the protocols, so it went really well. The Chief Engineer was even convinced that he would be able to keep the 2nd engine room (we have a forward and aft engine room one with 3 and one with 2 main engines) operational, so the ship could remain fully operational.  Around it, the other 800 crew did their part of the cycle by ensuring (simulating) that all guests were accounted for as well and moved to a safe area until the Chief Engineer could advise the captain that all was under control. And unfortunately it meant for the crew standing in the rain for a short while. 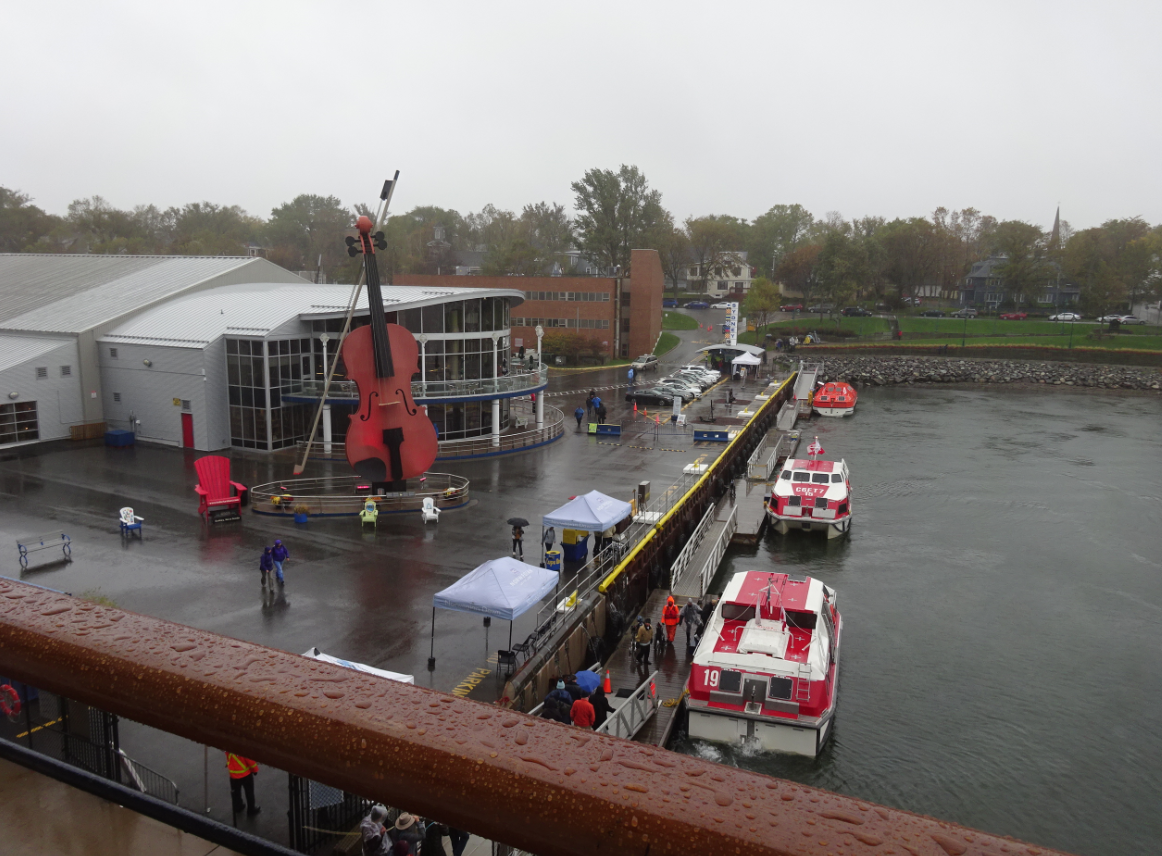 Where else in the world can you park your tender under an enormous violin.?  Only in Sydney. Tenders in the foreground are from the Norwegian Dawn. The orange one in the back is from the Riviera.

We left the Fiddle Capital of the world behind at 17.00 hrs. and sailed out of the river estuary again. Tomorrow we are in Halifax, where we will arrive around 08.30 which will be a little bit dependent on the weather. This morning 45 knots of wind were forecast outside but the current forecasts are conflicting so we will just have to find out what it really is, when we get there. All this wind is caused by tropical storm Melissa and that gave the following forecast last night:

A low pressure system well south of Cape Cod has evolved into Sub-Tropical Storm Melissa. This storm is forecast to track south of the Maritime marine district tonight, Saturday and Sunday. Gale to storm force easterly winds are forecast for the offshore marine areas south of Nova Scotia.

Melissa will not affect land areas of Nova Scotia except for large waves and heavy pounding surf at the coast. Melissa is expected to weaken as it tracks eastward well south of Nova Scotia.

Another area of low pressure forming north of Sub-Tropical Storm Melissa will give rainfall to the Maritimes tonight and Saturday. Over areas of southern Nova Scotia, 25 to 45 millimeters are forecast.

The nice thing is it should not affect our call at Halifax, as the port is very sheltered.