If there is a sustained wind, then eventually the waves will pick up, and during the night we felt the occasional bump in the road. But as the Captain had kept up the speed during the day when the seas were still smooth, by the time the “potholes” in the sea started to arrive, the Veendam had slowed enough to still provide a gentle ride. Although the weather forecast had promised a windy day, it was a lot windier than forecast. The sort of winds that gives captains grey hair, or as in my case, make them go bald.

Apart from the wind, there was the extra challenge that the dock is an artificial harbor where a sort of Bath Tub has been carved out of the shallow rocky bottom with a long and straight pier in the middle. It looks very nice on a drawing or a picture but it does not give the ships much leeway in drifting when approaching the dock. With other words, it just fits on a nice day and it just has to fit on a windy day. We were also assigned the North side of the dock, which is even tighter than the South side. That side was reserved for the Carnival Magic which is a lot longer than the Veendam and gets on the south side a few more inches of docking space. 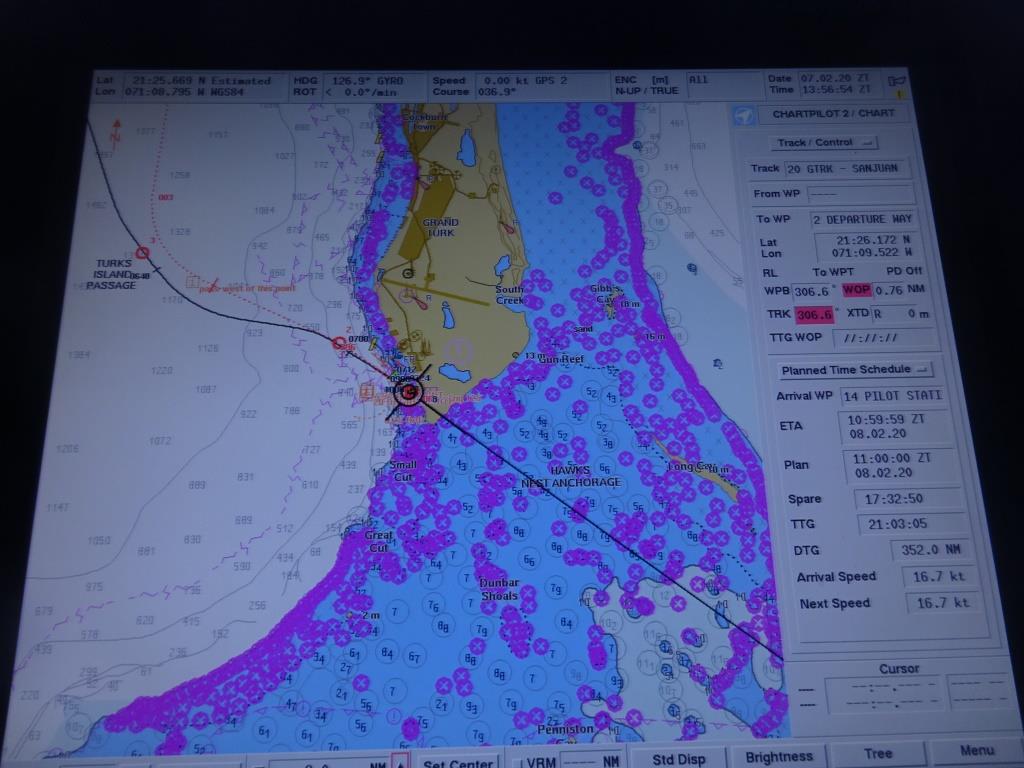 The approach to the dock. The ship came from the north and then turned to line up for the dock. During that initial approach the Navigation team tries to get a feeling about how the wind and current is affecting the ship.

So what do you do if you think the wind is at the critical level when having to turn into a space that is not made for that? Answer is you test your capabilities before going in. So this morning when the Veendam had lined up with the dock on the approach course of 127o, the captain simply stopped the ship to see what would happen, and if the thrusters and propellers could counteract the drift caused by the wind.  They could, with even some margin of power left and thus a safe approach could be made. For this afternoon it will be less of a challenge as the Carnival Glory will act as a nice wind breaker while the Veendam backs out of the “bathtub”.   And as soon as the ship clears the end of the pier, the “blow away” maneuver can be applied as the wind will push the ship to deep water. 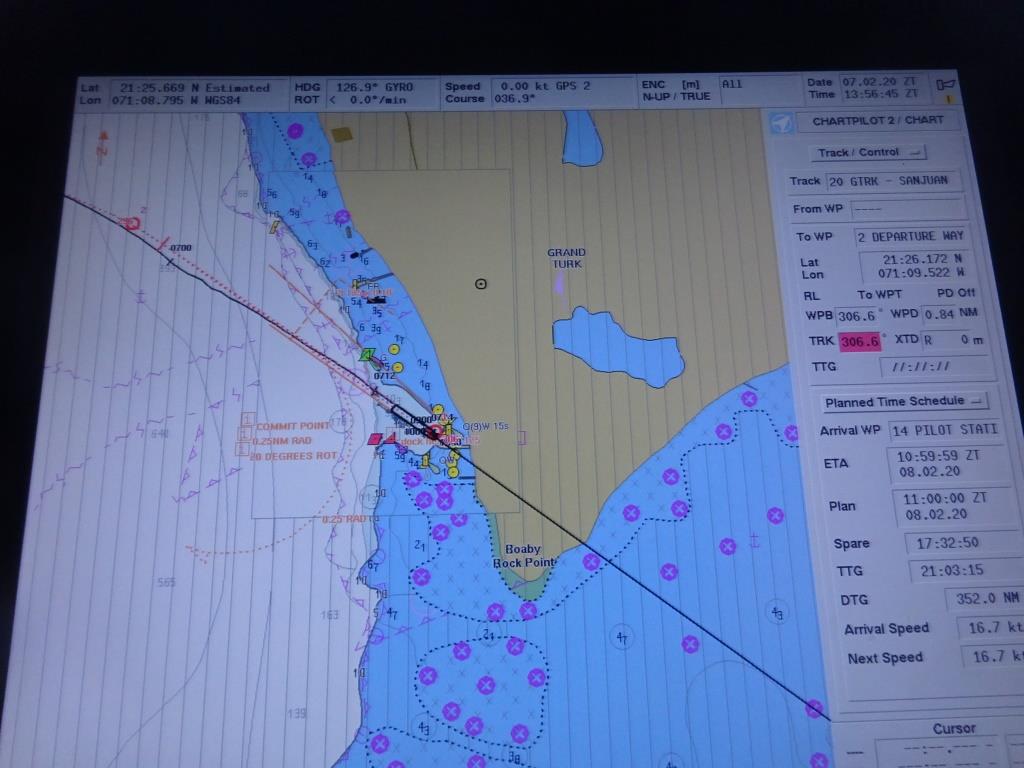 This is the moment see the red circle and red line to red line to the top left, where the captain stopped the ship to see what the wind was doing and if the thrusters and engines could hold out against it. From that moment on it was just a matter to move forward and slide in.

Thus today there were two ships in. There is the option for a 3rd ship to anchor but that was not really an option today. The ship at anchor or on the engines, could have stayed in position but it would not have been possible to tender ashore as the sea was nicely rolling along the pier with an amplitude of about 2 feet. And that is not good for exiting or boarding the tender. There was no ship at the anchorage today so either a very wise captain had cancelled early, or no ship had been scheduled at all.

Because Grand Turk is a man made port, we dock with the nose almost into the resort. And that gave the peculiar situation that the guests could sit on the beach in the sunshine but out of the wind as the two ships provided a perfect wind breaker. I do not know if the guests realized exactly what was going on, but through out the day we saw guests arriving on the beach, picking a location to sit and then slowly moving further down the beach until they were nicely in the lee of the Veendam. I do not think that the designers thought about that when they created the lay-out of the port but with southerly or South Easterly wind it just works fine. With North or North easterly winds the island itself offers protection, it is only with Westerly and North Westerly wind that the area is not sheltered. These winds are only blowing when there is a cold front in the area or a hurricane and in those situations we do not call at Grand Turk Island anyway.  Ships are meant to be at sea, not to be a hotel on the beach. 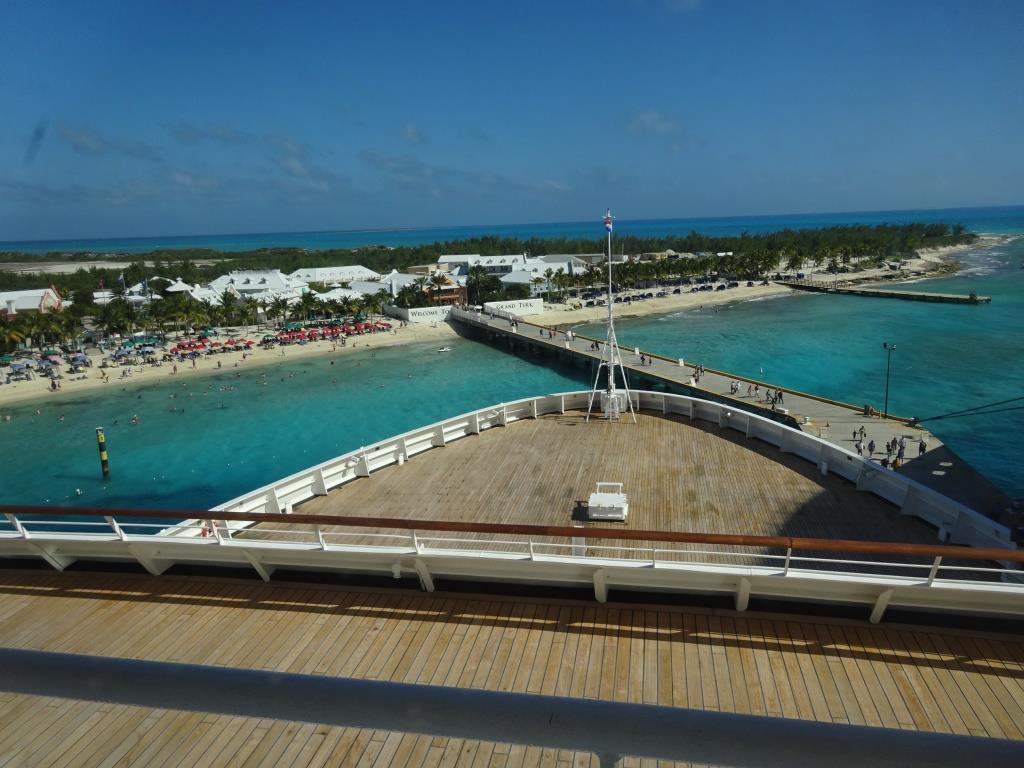 The beach of Grand Turk. Quite a few guests moved further to the left to be more in the shelter. There is a 2nd pool area inside the resort but most guests want the real beach experience.

The Carnival Magic is a near-mega liner with 3600 guests on board and she has also been constructed with the lifeboats (partly) hanging outside.  Once the guests have boarded they only have to move away from the embarkation deck and they can go down to the water. This is partly done to create more space onboard but also partly to speed up the lowering and boarding process in case of an emergency. Regardless of size, each lifeboat shall be filled and lowered within 30 minutes from the moment the Captain gives the abandon ship order and having lifeboats already halfway in position does help. In a real emergency the 30 minutes would only come into play if the ship was not be able to foresee the emergency. Otherwise everybody on board would have already been lined up and in the lifeboats before the critical moment arrived. 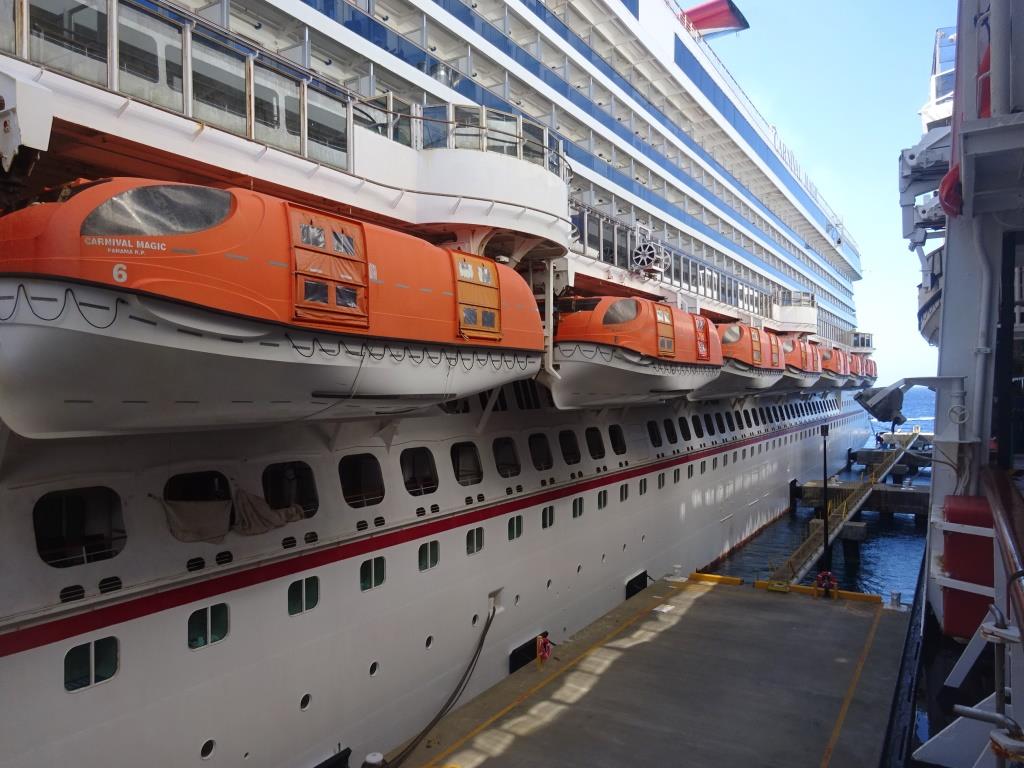 This is the latest in lifeboat design. Lifeboats permanently hanging at embarkation level so they do not have to be lowered first before the guests can enter.

Grand Turk to San Juan is the only tight schedule we have on our cruise and thus the ship will go full speed to make it on time. Apart from the distance we have an hour forward and we have the wind against us, thus it is time to go all out on the engines, in order to make the noon time pilot at San Juan.