With all engines fired up we raced for San Juan pilot station, put him on board, made a sharp turn to starboard and sailed into the port.  San Juan is one of those ports that are interesting to sail into, as the old town is right on top of the harbor entrance and then the ship curves around that area as the cruise piers are right behind it. That then gives the advantage that one can walk straight off the ship into the old town and do so just by crossing the street.  We were on pier 3 today which is about as close as a cruise passenger can get. There is also a pier 1 that is sometimes used for cruise ships (on a busy) day but that pier was today occupied by a private yacht The Eclipse (and if I have my records correct, that yacht is owned by Paul Allen of Microsoft fame and is arguably the biggest yacht in the world) Opposite was the USCG cutter Bear which is too large to dock at the USCG station at the corner of the port.  Then came pier 3, with the Sirena of Oceana Cruises on the West side, us on the East side, and at pier 4 west we had the Star Breeze from Windstar Cruises. This ship used to be one of the smaller Seabourn ships and was sold off to Windstar when Seabourn started a new build program. The funny thing is, that Windstar was once a subsidiary of Holland America and Seabourn still is. So it remains a sort of in the family happening with the way the tonnage is moved around. At a new terminal to the East were the Vision of the Seas and the Celebrity Summit. Those docks are far, far away from downtown and are normally used for change over days. 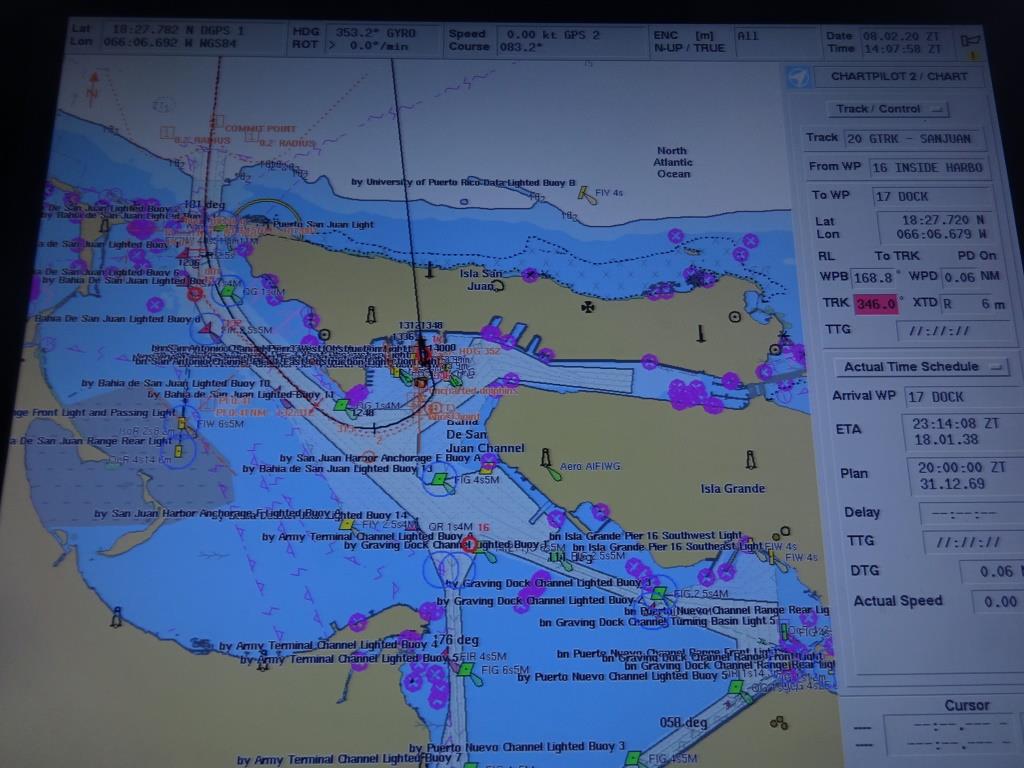 The port of San Juan. You come in through a dredged channel on a course of 181o,  follow the coast, turn sharply to 090o, curve around the USCG station and then go North East until you come to the dock.  The triangle below is the cargo  area which is only dredged along  the docks, so the darker blue are all shallow area’s.

Sailing into San Juan is a sort of standard Seafarer operation. One for the textbooks to train on.  It has wind and current while approaching, it has a leading lights so you can easily keep the ship in the middle of the fairway, it has a sharp turn to port so you have to consider when to start slowing down; and then it is followed by another sharp turn to the north to slide alongside the correct berth.  On a not so windy day this is one of the ports where we like to let the upcoming navigation officers to have a go at it. Today it was a bit too windy so the captain executed the maneuver himself.

San Juan is the main entrance port to Puerto Rico. There is another port which is fairly large, Ponce, located to the South West of the island but San Juan with its natural harbor (if it was smaller you would call it a Laguna) gets most of the cargo traffic. Therefore to the East and to the South of the old town where the cruise ships dock, is a very large cargo port with docks for Container ships, Roll on – roll off and oil terminals.  As Puerto Rico is part of the USA (Although it is not a State) most cargo traffic comes directly from the USA with Miami being one of the main connecting ports.  Cargo comes in by barge but also by specialized ships which carry the containers still on the wheels so they can be directly pulled off the ship by means of a truck cat. Such an arrangement is in principle faster than loading and unloading of pure containers because if there is a truck waiting to pick the load up, there is no waiting time. 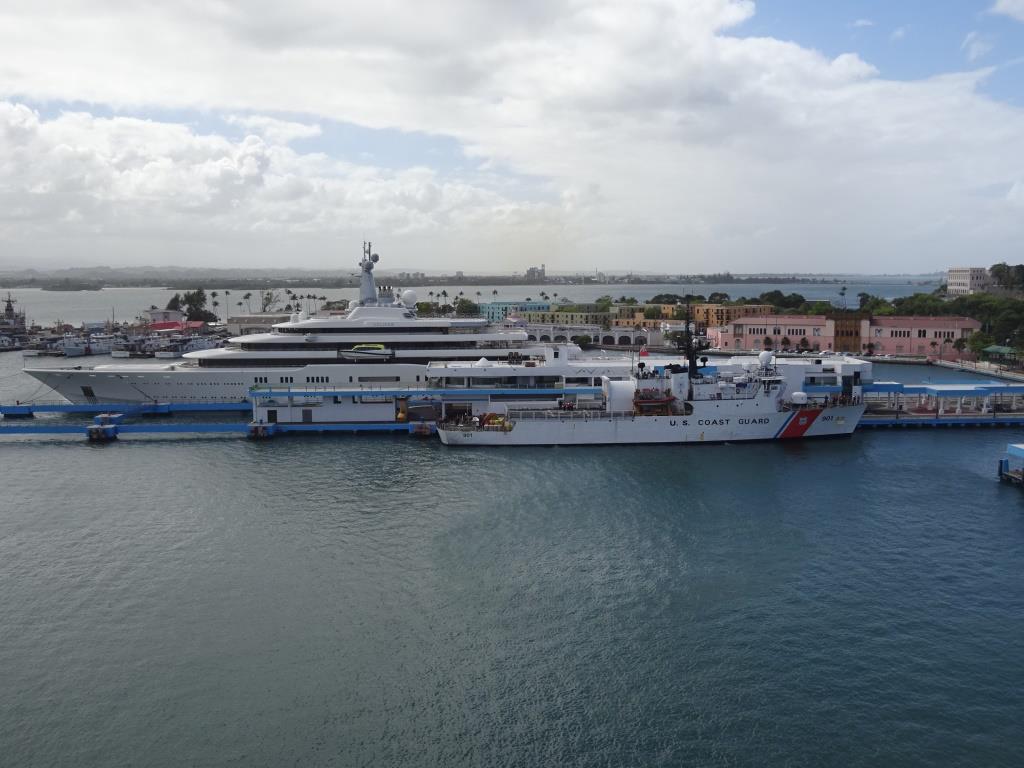 The USCG cutter Bear docked at Pier 1 East. She is overshadowed by the private yacht Eclipse. Which one is better? The Bear carries a gun and a helicopter, but the Eclipse has a submarine and a helicopter and supposedly also two Rolls Royce’s in the garage.

The USCG cutter Bear is quite an interesting vessel as it is much larger than the Coastguard boats that we see around our ships while going in and out of port. The cutter was built in 1980 and is called a medium range endurance cutter which means she can operate worldwide. Involved in anti-drug operations but also as part of Navy and Army deployments which also saw her involved in the Kosovo campaign a number of years ago. The fact that she now popped up in San Juan makes me think that she is once again involved in Drug runner operations. 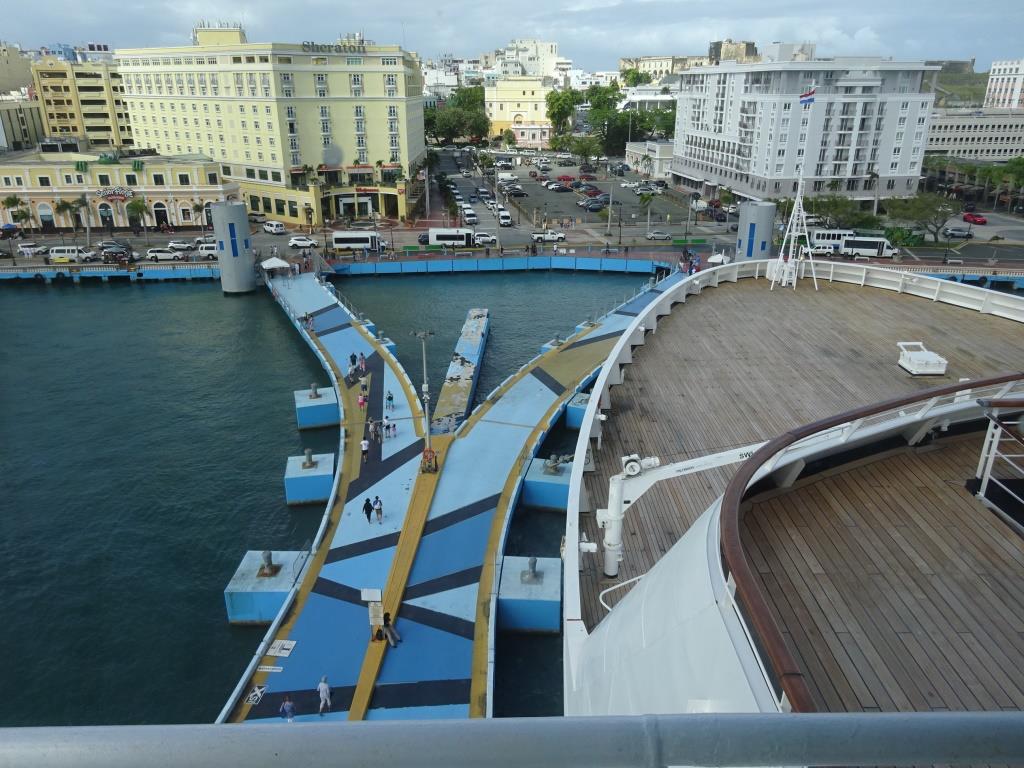 Looking into town. Pier three has two pathways onto the dock, which is very handy when there are two mega liners docked at this pier.

Most of our guests go for a walk into town here as it is so close by. But there is plenty of stuff to do for those who want to enlarge their horizon beyond buying the obligatory T Shirt. There is the walking tour through the El Morro Castle and the San Christobal Fortress just behind it. City tour, harbor cruise, Bacardi factory and even a kayak tour. The latter is possible as San Juan has a tropical forest and climate so it rains a lot and there are plenty rivers and creeks.

We stay here until 2300 hrs. and then sail around the corner to Charlotte Amalie St. Thomas for that we have to maintain the top speed of 11 knots to make it tomorrow morning by 0700 hrs. to the pilot station. We will be docking at the WICO pier which is right across from down town. Weather looks good, slightly less wind but warm 82oF / 28oC.