Today we are having a relaxing sea day while the ms Veendam sails towards Grand Turk Island in the Turks and Caicos Islands.  To get there, there is only one way to go and that is directly, north of the Grand Bahama Bank and then to follow its edge all the way down. That is the straight and the direct route. There is a plan B (A good sailor always has a plan B, even if it means not sailing at all) and that is going around the Bahama Bank on its south side, north of Cuba. That is a much more sheltered route but a much longer route as well. Now we are scheduled to arrive at 08.00 tomorrow morning, if going the other way we would be lucky to make it by lunch time. Still if needed, we would do so. As we do not want a ship full of sea-sick guests. 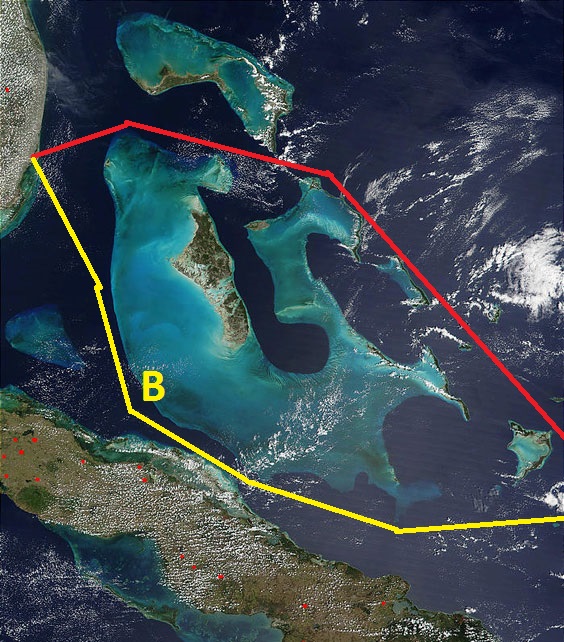 We are sailing the Red route while plan B, the yellow route is the long way around.

But the weather is good and we are going north of the Bahamas. If you have read my previous blogs in the archives when I was on the Nieuw Statendam last year, then you will see I commented a few times about the Caribbean weather not being Caribbean at all, as the Trade Winds were absent or very mild… In my opinion that was caused by the turmoil of the hurricane season which caused all the wind patterns to change. Since then 2 months have gone by and things have returned to normal. The Trade winds, which blow in the Caribe and also just to the North of it, are blowing again. And today quite fiercely. We are going against it with about 15 knots (that is force 4 touching 5) and the Trade Winds are blowing at a force 5 to 6. Thus we have a combined wind of force 10 to 11 on the decks and that is close to hurricane force winds. Hurricane force winds while having a most beautiful day. The wind has not been whipping up much swell so the ship is steady as a rock. The captain has been making announcements about being careful when stepping outside, mainly due to the fact that when the winds change direction a little bit it might push against the doors, with the subsequent danger of slamming the door shut with somebody between door and door frame.  And then we always have guests who want to lean against the wind, which with the relative wind of a force 11, you can easily do. But if the wind force changes just a little bit, then your balance goes and that can be dangerous as well. So the Promenade deck is open as it is safe to walk around but the Observation deck on the bow is kept closed, to ensure nobody gets blown away. 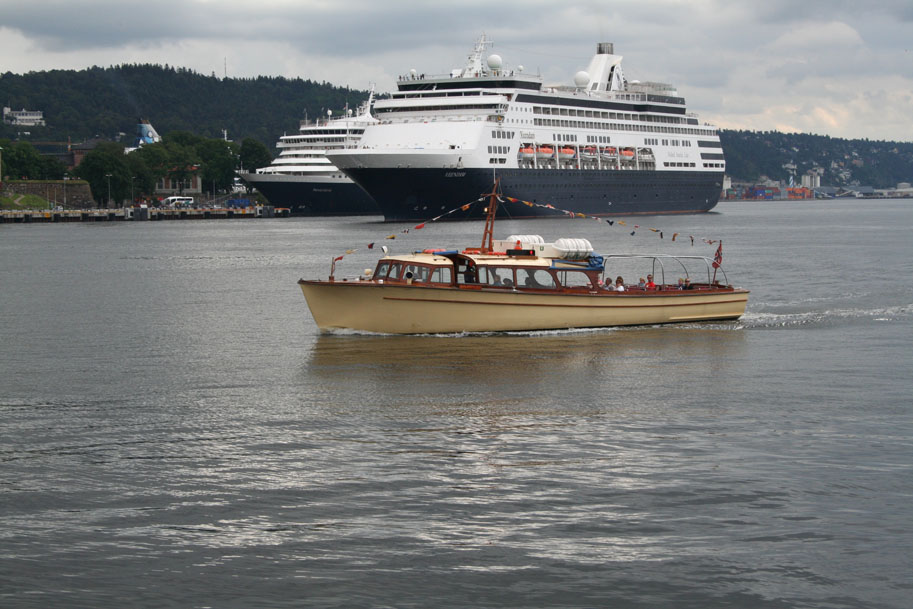 The ms Veendam passing the ms Prinsendam while on a joint visit to Oslo. In the foreground one of the local sightseeing boats.

The ms Veendam is will be making 7 day cruises in this area until 22 April when she will be sailing across the Atlantic to Europe for the Europe season. She will basically take over the Europe Cruises the ms Prinsendam used to make, and because of the size of the Veendam she will be able to get into the ports where the Prinsendam used to call at.  Then for the winter she will sail from Tampa and those cruises include a loop cruise up and down the east side of South America and that will include a few days of Antarctica.

I will be on the ship for the next 3 weeks and as there are no audits in the near future I will be focusing on optimizing drill execution and practical knowledge of the crew. Providing a more in-depth training for the hotel crew on board whose direct focus is of course service. They all know what to do, but most of them also find it interesting to know the “why” of the way we do things as we do them.

In the meantime everybody’s focus is on keeping the ship healthy and well. Every year the cruise industry has its challenges with the Norovirus and as you will have read in the newspapers the whole world, including the ships, currently has challenges with the Coronavirus.  The company is closely monitoring the situation, hour by hour, and we on the ships have been adjusting our pre boarding questioning to the new situation. All our crew that comes from the Far East or returns there is flown via airports outside the affected zones so there is no chance of coming into contact with somebody infected.

For tomorrow we are looking at a nice day in Grand Turk. The weather gives me a mixed feeling of blessing as it is going to be mainly overcast which is a nice way to start a cruise, as the chance of getting sun burned is less, on the other hand, not feeling the sun burning on the body might tempt the guests to stay out longer and then you still get burned. It is expected to be a windy day with wind from the South East but that should not affect the guests as the island will act as a buffer. Grand Turk cruise pier is a Carnival Corporation development and thus we will be together with the Carnival Magic during the day. There is only one pier which can handle only two ships and therefore it will not get over crowded in the resort.