And thus we plodded along the coast with a nice slow speed, avoiding all the bumps in the road by riding nicely over them with that slow speed.  The ships course line followed the coast and this time the precaution was taken to stay west of the 100 meter line. This is what most ships do if the people on board use their brains.

Especially in the Morocco the local fishermen sit on the 100 meter line. West of it, the depth of the ocean increases very rapidly and as a result cold water is being pushed up from the deep. Fish love that and so they congregate where the nutrient rich water comes up from below.  And fishermen love fish, so they congregate in the same locations.

Thus if a ship decides to sail over, or nearby, that 100 meter line it will meet all these fishermen. It gives a lot of headache for the navigators as they do not know what a fisherman will do and it makes the fisherman unhappy as he/she does not want to move and he/she does not know if the ship will move. So it results in a lot of unhappy people which can be avoided if a ship stays west of that 100 meter line.  When I sailed here in the past, I made sure we stayed “wide” from it all even if it meant burning more fuel. But throughout the night we then heard irate fishermen screaming at ships who sailed inside their fishing grounds. “captain, captain think about my children” etc. etc.  I do not speak Moroccan but if I hear !@#$%@#$%& on the VHF, I know that somebody is not really happy.

Who was also not really happy, or better said very concerned, was the Master of the Vessel, Capt. Hans Mateboer. He had been following the wind and wave forecast and for early morning 12 Dec. the predictions for the bar at Casablanca entrance were for waves between 3 to 4 meters. That is 9 to 12 feet sustained swell, which will hit the ship sideways while it lines up for the port entrance. 9 feet might not sound as very much but if it comes in the form of a long rolling swell building up on shallow water, it can have an enormous impact on the ship and cause it to roll considerably. 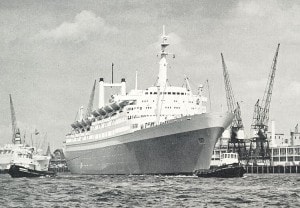 As the ss Rotterdam V looked like in 1976. Seen here departing from Rotterdam port

Some of us in the company still remember the roll of the ss Rotterdam in 1976. When it got caught in a freak wave also on the bar while it was waiting for the pilot. That caused the ship to list 43o and roll back again. I figured the amount of roll out in 1986 when I was on board and the purser gave me all the old reports. In the reports it mentioned that a certain type writer had shifted off the table and ended up in a crate/ box in the corner of the Front Office. By reconstructing the set-up we found out for this type writer to make that move a minimum list of 43o was needed. So maybe it was even more. One of the reasons that the Rotterdam survived was that it had an overhanging promenade deck and the water could not get into the ship. But Casablanca entered Holland America Line history that day as being a very dangerous port.

Thus the captain was faced with two options, A. hope for the best and see tomorrow morning if the weather forecast was exaggerated or B. get there before the swells started to build up.  The latter made more sense as it avoided the fair chance of cancelling the port and thus the Rotterdam sailed a bit faster and we arrived this evening at the pilot station at 17.00 hrs.. All the guests were warned that the ship would still roll a bit and everybody sat down happily clutching their drinks in their hands while the ship made the turn into the port.

There is a good solution for every challenge.

The ship will spend an overnight alongside the dock and then the doors will open at the regular arrival time. Tonight nobody can get off as the authorities were not able to arrange on short notice sufficient security to comply with the security regulations that are in force. No special regulations just what is required for every port, but it still takes man power to comply and that man power might have been already allocated somewhere else. 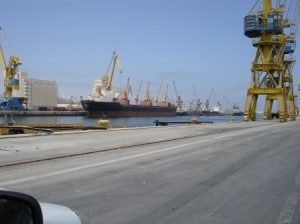 This is what we should see when we wake up tomorrow morning. Casablanca has a very large port.

Casablanca is a working port, 24 hours a day so I hope they will not make too much noise, or smell while we all sleep. Last time I was here they were loading Tapioca and the smell penetrated the whole ship. Switching off the A.C. was no option as it was a very warm day so we were forced to think about fried fish all day long.