So while the sun was rising, the ms Rotterdam docked at Agadir in Morocco. The port is basically a U shape piece of concrete sticking out of the desert. A cold desert as well. It was barely 50oF when the ship arrived. 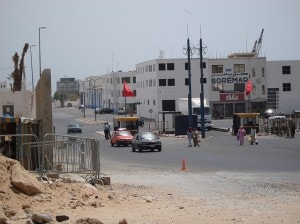 The entrance to Agadir Port

As far as I could see there was not a single bit of greenery in sight only sand and rocks. This is a real desert area. I later heard from the guests that further out it was not that bad.  Also not a port to just wander around in but a place to take the shuttle bus to the town itself. Which is of interest due to an ancient Kasbah just outside the city; the old port (on the landside of the port) and the local museum. In 1960 there was a devastating local earthquake with many fatalities and that is also remembered at various locations.  Another thing which Agadir seems to be famous for is the largest collection of beehives in the world.

For those who were not going ashore, the art instructor (we have an arts and crafts lady on board for the whole cruise) had her class make little beehives.  Apart from her, there is also a water colorist on board, with a very successful class and the results of their undertakings are visible on various cabin doors throughout the ship. To keep the more vocal ones busy, tomorrow the Cruise Director is starting the Christmas choir. They will perform near the end of the cruise and most of the time it turns out into an amazing performance. With over 1000 guests,  there are always a number of very talented people among them, from gifted amateurs to near professionals, or retired professionals.  They always draw a full house in the show lounge and it always ends with a standing ovation. 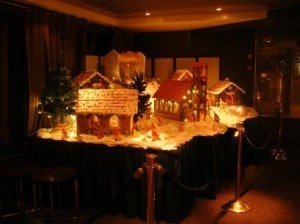 Deck 5 on the way to the diningroom, for all to admire.

While the guests were ashore, the ship’s crew started to transform the ship. The Christmas decorations were going up. It will take a few more days to complete but in the main area’s the first pieces arrived so we can spend the next 11 days before the cruise ends in a Christ- missy atmosphere.  The challenge is always to get sufficient pieces in to fill up an area and at the same time not to overdo it. And as a ship has some very large area’s that is not always easy.  Here on the Rotterdam we can easily fill up the Atrium but I wonder how they do it on the very large ships where they have these atriums that go 10 stories high with four or eight elevator banks in them. 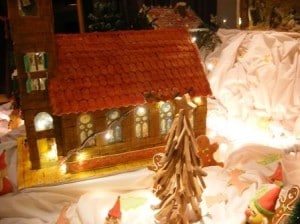 With a lot of attention to detail.

A set piece that somehow always shows up in a Holland America Line ship is a Christmas village. Supposedly completely made from edible materials but in reality only the coating is made that way, with the effect to make it look like a Hans and Gretel village.  If we made it all from edible material, the houses would quickly collapse as they would dry out from the ships Air – Conditioning. Thus they are the creation of the ships carpenter who makes them out of plywood, before they go to the kitchen to be turned into pieces of Winter Wonderland. A bit of white Taffeta and some Christmas lights and voila you have a whole corner full of nostalgia.

The main challenge with all this decorating is always that there are never enough electric sockets. If they are in the vicinity then never at the location where the decorator needs them. Creativity and ships design do not go always hand in hand. The result is that Housekeeping has to create ingenious ways of getting electric wires across pathways and hallways and under carpets and along plinths. All done in such a way that it is safe for passing traffic and up to the satisfaction of the Chief Electrician. Especially to be safe for the motorized version of ships traffic. We have quite a few scooters on board and some of them are not unlike all-terrain vehicles with extra grip tires on them. Those tires and thin electric cables do not go very well together. As a result Holland America is a very good client of 3M for buying large quantities of Masking and Duct Tape. Maybe it would be an idea for the manufacturer to produce a Christmas version of these adhesive tapes no doubt it would sell very well.

From Agadir it is about 300 miles up the coast to Casablanca which is also in Morocco. Too much distance to cover in one night and thus we spend a day at sea. A good idea anyway to go slow as the sea is supposed to be a bit wobbly during the coming night and with a reduced speed the ship will ride the waves nicely instead of banging straight into it. For the rest the weather should be good, if a bit chilly as all the North Atlantic mayhem is currently focusing on the West coast of Great Britain. Not nice at all, but a good feeling for me as my apartment is on the East coast.