This was our last relatively warm day of the cruise, unless we are going to get a very local Green House effect in the coming days. Tomorrow we will be in Agadir, Morocco, and the temperatures will plunge to 15oC / 60oF.  Time to start thinking about Christmas and snowy things.

Most appropriately the crew started today with un – earthing the Christmas decorations. One of the side – wings of the dining room was a forest of Christmas trees in the process of being assembled. Most of our Christmas material is supplied year by year by an outside firm. That has the advantage that the company & ships can follow the latest trends in decorating and we are always on par with what is shown in the shops ashore.  The Rotterdam, being equipped for longer cruises, also carries some own materials that stay onboard all year around. There is a little bit of storage space here and there and previous ships management has put away a few trees, balls and dwarf height toy soldiers, in the course of the years.

But today we were in Arrecife on Lanzarote and this is a smaller port at least compared to Las Palmas. 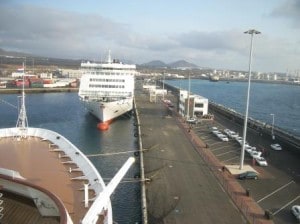 There was a local ferry docked ahead of us, so we could not dock in front of the terminal

It is in lay out the same as Santa Cruz of two days ago; only the other way around. The open end to the pier is facing south, while in Santa Cruz it was facing north.  But again the breakwater is also serving as the major pier of the port and the ms Rotterdam was docked in the middle part where there is also a small cruise terminal.  As mentioned yesterday the local shopping center ran a shuttle which was a good idea as the town is quite far away from the port. It was a very good day for the local taxis. 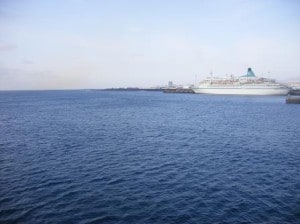 Opposite to us was for the 3rd port in a row the ms Albatros. It is chartered by a German company called Phoenix Reisen and offers 3 star package holidays for the German Market. Once this ship was the Royal Viking Sea built in 1973 for Royal Viking Line. In those days it was a six star ship. When Royal Viking was bought by NCL the ship was eventually sold to Royal Cruise Lines in 1991 and ended up after a few more renaming’s with Phoenix See Reisen in 2004, being chartered from an investment company. Royal Viking was also the company which built the Royal Viking Sun which has now become our Prinsendam (II).  I should not really post cruise ships from other company’s but the Royal Viking Sea was one of three sister ships which were really trend setters for the cruise industry when it slowly started to take off in the 1970’s. So we have been looking at a piece of Cruise – history in the last few days.

Holland America was that in a similar way as it had the first ships with such novelties as a self-service Lido Restaurant (pioneered in 1968), Crows nests on all ships except the Rotterdam V and what was taken over by nearly all cruise companies, the Holland America Line swivel. This means that there is a path way that runs from the bow to the stern on the major public room deck and it means that you do not have to go “up and over” to get to the most important lounges onboard. More company’s had something similar but HAL was the first one who had come up with the concept in 1958 on the ss Rotterdam when it designed two full horizontal decks for both First and Tourist Class. On the little Prinsendam (I) it got the current form and has not changed very much since.

I had to think about that this evening, when I “swiveled” towards the stern and then realized that with the start of the S – class in 1992 you did not end up anymore in the Lido Restaurant as was the case with the earlier ships but in the Dining room as it had been raised to two levels. The Lido Restaurant was bumped up to the higher decks.

Tonight we will cross the North Atlantic Ocean between the Canaries and Morocco and tomorrow we will be in Agadir arriving at 08.00 hrs.  just after sunrise which has been scheduled for 07.35 am. to take place.  At least according to our daily program and thus far it has always been correct.