During the night and the morning the swell did build up as predicted and to such an extent that there was a surge going through the port. Even the ships deep in the harbor, protected by two finger piers felt it. A surge is not really a swell or waves that run through a port it is more a sort of pressure wave caused by the sea outside that is pushed through the breakwaters and into the harbor. It runs all the way in and is then sucked all the way out again. Only to be repeated a few minutes later. As a result all the ships were riding along the dock, causing the occasional rope to break.  But for the rest it was a great day. Sunshine and not too warm or too cold and that is always good news for the tours.

On board we geared up today for a big drill, Fire drill combined with Triage. This means that we simulate a fire or a collision with multiple casualties and then the ships complement has to support the medical team here to deal with a large influx of patients. This time I managed to get 25 volunteers and they all acted out, with great gusto, the various injuries that were given to them. From being near death, to being hysterical, to having a broken arm, to missing both legs or suffering from burns or gas inhalation.

After the Emergency Response Teams have fought the fire and secured the area, a Medical Officer is let into the disaster area and will triage ( = assess & select) the casualties, which are then taken to separate area’s for further  treatment.  That goes by colors. 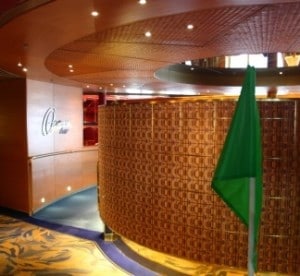 We use Triage Flags, same as in the army, to indicate the treatment area’s. 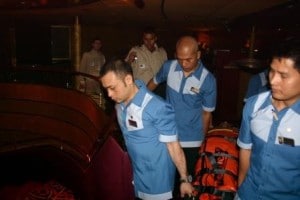 Transport of the casualty

While the Triage Officer is color coding, support troops, stretcher teams etc. are starting to move the casualties to the various treatment areas.  The rest of the medical team will be in the Red Zone, as those are critical, the rest can wait. The challenge of the drill is to do it safely, fast and with good communication.

A drill like this takes nearly a full day to set up and that cannot be expected from the ship and thus I always offer to organize one when I am on board.  It is a three day stage, the first day, table top = discussion of what is going to happen, 2nd day the drill, 3rd day, review and lessons learned. All the observations and comments that are made by those who have to do it, are taken on board and go with me to the home office for further review and hopefully they will help to improve our procedures. 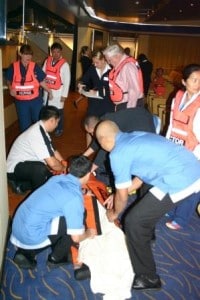 The medial team dealing with a “Red” case

Today was a very good drill. The volunteers acted with great passion, all the teams were very enthusiastic and the team work ensured that all objectives were reached.  The latter is for a drill like this with about 80 people involved not so easy to achieve. But Team Rotterdam did it. I was genuinely impressed.

We left this evening just after 7 pm. As soon as all the tours had returned. The Captain had warned everybody that we would roll again when going outside but as expected it was less then when coming in. It is always better for a ship to catch the swell on the bow than on the stern as swell has a tendency to lift the stern, while the bow just cuts through it.

Tonight we are sailing along the coast of Morocco again, safely away from the fishing boats. If my past experience guides me, then there will be a lot more tonight – further north up the coast – than yesterday – further south down the coast -.

Then tomorrow we will be docked at Tangier by 0800 in the morning. Noon time temperature will be a balmy 17 oC / 63 o F.