This is our last port visit in Morocco. During the coming night we will cross the Straits of Gibraltar and 54 miles later we will be in Cadiz, Spain. This is the moment that the ship is leaving the African Continent behind after having made a full circle. I will be able to see tomorrow in the chart at what point we completed the loop with the old course line – going into the Straits and the Med – crossing the current and – going up to Europe.  We will not re-enter the Mediterranean as Cadiz is located on the Atlantic side of Spain.

Last night we sailed along the coast but kept well away from it. The fishermen were out in force, close to the coast again but the ms Rotterdam was sailing along on a deep water course, having for most of the night almost a 1000 feet under the keel. That is too deep to throw your fishing rod in and thus the fishermen were making noises closer to the coast. 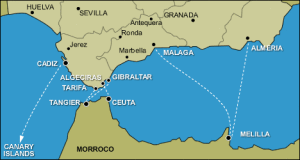 Tangier obtains it’s prominence from being the main gateway port for Europe. There is constant ferry traffic going in and out, to and from the ports in Spain. For those interested in Ferries, this is a real candy – land for the ferry spotter. Not only the numbers that can be seen, but also the variations that are in use. 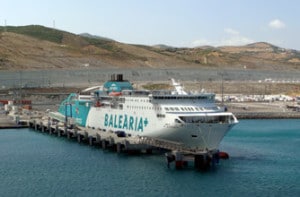 Basically there are two main variations out here. The regular ferry as we all know them. Not unlike a cruise ship but always with a large garage to facilitate ro – ro traffic.  Often in use for the slightly longer runs but also needed for the cargo traffic. 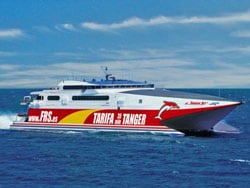 Then there is the Fast Ferry which are mainly Catamaran type boats propelled forward by water jets, which maintain the pedestrian traffic. Although some of them can also take a limited number of cars and Lorries. These ferries can make an average speed between 25 and 30 knots providing a crossing time to Spain between 45 and 70 minutes.  There are two ports in Spain which are on the other end of this run: Algeciras & Tarifa. The 3rd one is Gibraltar which is in Great Britain. Although Algeciras also has ferries running to Ceuta which is located in Spanish Morocco.  Due to the short crossing time, you could decide to go on an excursion to Europe while docked at Tangier, if you had been here before. I do not know how easy Immigration and Customs would be on the other side but for me with a Dutch/European passport it should be easy as I would basically be “coming home”. Going the other way again might be a different story; as Moroccan immigration might raise an Arabic eyebrow if you come to the counter with the explanation that you just hopped over for the day while on a luxury Holland America Line Cruise. They expect you to visit the local sites, not to go to “the other side”.

It is interesting to note that the port of Tarifa used to be a toll port, from which our word Tariffs come. Nowadays there is no more toll levied but there is still a traffic/reporting station that keeps an eye on everybody going to and from.   Approx. 500 ships pass through the Straits every day, varying from very small fishermen to very large Container ships and Super Tankers.

That will in the future be even more as Egypt is planning to build a 2nd Suez Canal which will be able to take even larger ships.   I think they are aiming for an opening in 2018. Then we will see the largest container ships going directly from the Panama Canal and its new locks to the Mediterranean and the new Suez Canal.  Knowing ship owners, they will then probably start building even larger ships so that both the new Panama Canal Locks and the new Suez Canal are going to be too small again.

The Captain decided this morning that he is staying longer in Tangier and thus the ship will as well. The reason is the wobbly weather that we are expecting. With only 54 miles to travel, it means an average speed to make of about 5 knots if we leave at the normal time. With 5 knots the stabilizers do not get enough flow and thus cannot help to stop the rolling of the ship. Our new departure time is now 22.00 hrs. and that will bring the average speed up to over 8 knots, giving enough flow for the stabilizers to keep us all comfortable.

Thus we are expecting a ship that will move a bit during the night, before we arrive in Cadiz in the morning. Tomorrow will be a Sunday and everybody might be in church in the morning and turn Cadiz into a very quiet place.