When you watch television and they screen something about Spain, it is always sunny weather with beaches full of people in the sun, or sunbaked area’s in the interior with sleepy villages where nothing has happened since Columbus got lost on his way to China.  And here we arrived in Cadiz with a permanent down poor going on and it being cold as well. That is not Spain as it supposed to be. 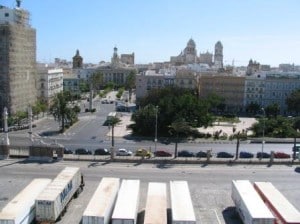 I am not posting a photo of Cadiz in the rain. So here from my previous visit with the Prinsendam, when Spain looked like Spain.

Last night the Rotterdam sailed with stabilizer speed from Tangier to the North side of the Straits of Gibraltar and as the captain had predicted, the ship moved a little bit but the stabilizers were doing a great job.  At approx. 01.15 we crossed the point where the course lines came together and we completed the loop around Africa.  From there it was following the coast and then sailing into the port of Cadiz. The entrance bay has the form of a crescent moon with Cadiz located in the lower tip. The city is between the sea and the port and thus the port is very sheltered.

I had the plan again to ride the Big Red Bus which stops right outside the Gate but as it kept raining I gave up as I wanted to sit on the top deck to see the sights.  I had learned a long time ago that an umbrella does not work very well on a double decker bus.  Later I spoke to a Lady who had managed to do the tour just after lunch time when it was dry for about 2 hours.  Well next time better, Cadiz is a very popular port, so no doubt I will be back here.

Today we were in port with the Arcadia of P&O. Although belonging  to another company, she was conceived by Holland America. She is the 5th. in the series of the Vista Class. But it was decided when the building started to transfer her to our sister Brand P&O which is also part of the Carnival family. I am not completely clear why this happened but maybe it was because there no 5th. Compass point. Our Vista Class has the four points of the compass, Noordam – Oosterdam – Zuiderdam – Westerdam so what would you have called a 5th one?  Compassdam??

The Arcadia as she looked when leaving the shipyard in 2005

What I like about P&O is that they have a same naming culture as Holland America. Using names from the company heritage. This Arcadia is the 4th one of the company. If my archives are right, the first was one was in 1888, the 2nd one in 1953, the 3rd one in 1996 and the current one is thus the Arcadia (IV) from 2005.  My wife and I made a cruise on her in 2007 because we wanted to see what another company would do with a Holland America Concept and she is very nice on the inside. The color scheme (at least in 2007) is not unlike what we will now see on board the new Koningsdam.  If the training class would still have been on board, I would have tried to get them on for a visit. This is strongly encouraged within our company’s to do, but it does not happen very often as the work load is too much to suddenly hop over on the spur of the moment.

Because most of Spain is in Central Europe, Cadiz is on Central European time and thus we had to go one hour forward last night.  Tonight when we sail to Lisbon, we go one hour back again as Portugal is on a different time zone.  It is on the same time as the British Isles which are also one hour earlier than the Continent.   For an island to be on another time is one thing but for a country that is completely glued to its neighbor Spain it would be another thing and cannot be so easy. Or maybe it is, if you can live a life where time is not important and everything can happen tomorrow, time zones are maybe not noticed at all.

We sailed out of Cadiz at 18.00 hrs. and tomorrow we will have a scenic arrival by sailing up the Tagus River around 09.00. For an 11.00 hrs. docking. The weather forecast calls for a chance of rain, so we have to wait and see what that means.