This morning we had a late arrival, as planned, as the ship is staying overnight here. It gave the company the option to schedule a scenic arrival. Approaching the sea buoy at 0900 hrs. and then being docked by 11 am at the Apolonia Cruise Terminal. Lisbon has three passenger or cruise terminals as it is a very popular cruise destination. There is the old passenger terminal from the days when ships left for New York and the Colonies and it is called Alcantara after the west part of Lisbon which is also the industrial area.  Here still the old Terminal building stands with its 1st. 2nd class waiting rooms. This dock is not ideal for an overnight stay as they built a bridge over it. Ponte de 25 de Abril or the singing bridge, a constant zooming noise caused by vehicles and trains travelling over it. Then there is Rocha a bit more to the East and then there is Santa Apolonia. This terminal is being upgraded to become the major cruise terminal of the three and is located almost in downtown. It took me today approx. 10 minutes to walk back from the Central Square.  Eventually it will be able to accommodate three large cruise ships but today there were only two. The Rotterdam and the Oriana from P&O. So another “All in the Family affair”.

Sailing up the Tagus River was very nice today as the sun came out and by 09.30 the angle was just right; it nicely shone over Lisbon on the North bank. Perfect planning and scheduling.  By 11 am the good ship was docked with the nose in, upstream, as it was ebbing and the local pilots do not like to swing on the falling tide as it is hard to maintain position while the river tries to flush you downstream again. The Lisbon pilots embark and disembark at Belem Tower and the Captain and Navigators sail the ship to Belem Tower themselves.  The river is wide and the only challenge can be the swell running at the entrance as it has a sort of Sand Bar which can raise the swells even higher. The Captain warned that the ms Rotterdam could be rolling while going in but luckily we hardly noticed anything. 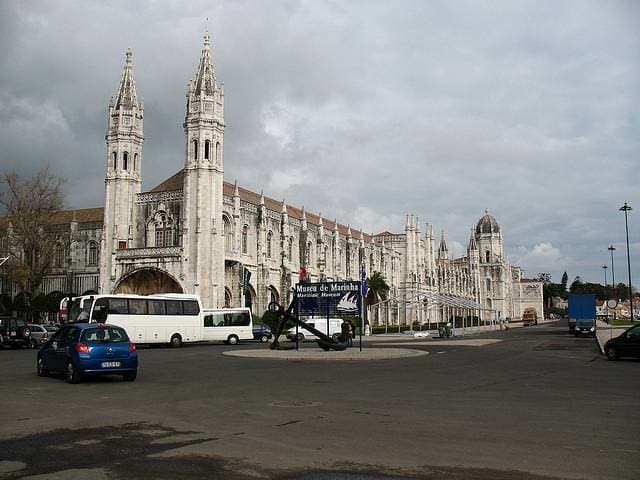 The Maritime Museum. I have been there already but it is a must for any salt water affectionado

I was very happy with the Apolonia dock as it has a train terminus and is a fixed stop for the Big Red Bus. This morning I held my last training and thus I was free to explore in the afternoon. For 18 euro’s you can combine two routes, (Belem – Red line) West & Central and (Oriente – Blue line) East & Central and that kept me happily occupied for 4 hours. I saw Central Lisbon three times as I stayed a bit longer on the one route. Sitting in front of me was a group of English people, most likely from the Oriana, who were coming from Geordie Land. Those who come from this area in Northern England sometimes have a strong accent but also have very unique vocabulary and way of expressing themselves. Many famous comedians come from that area and that is understandable as their way of observing life is to comment about it in a very understated and funny way. So I saw Lisbon for 30 minutes through the eyes of Geordie Land. I wish I could have taped it. To hear a land mark statue being described as a “puffed up bugger with p—pot on” his head did put everything in a totally different context. I have to admit, they had a point. The helmet on the Gentleman on the pedestal did resemble indeed a p – pot. 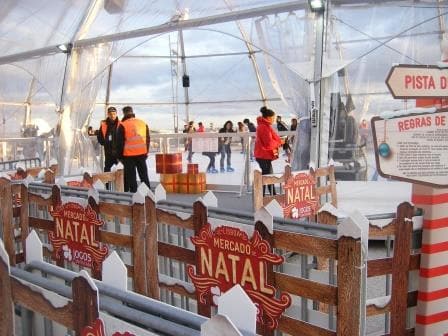 Lisbon was gearing up for Christmas and had even a little Christmas market on the main square (Praco do Comercio) including a mini ice rink. On the North side of this square there is Beer Museum which I did not know about so that will be the focus for next call Lisbon.  One has to immerse oneself in the local culture whenever one can, a Museum is culture, and thus I have now found a sound reason to drink a local beer. 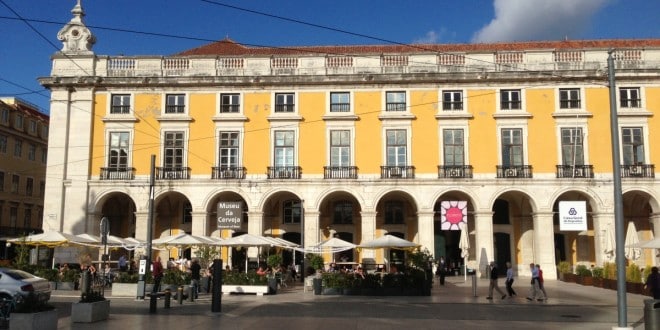 This time a photo, next time a visit

This is also the last blog for the time being. Tomorrow I will go on vacation and fly home to England. I will arrive home in the late evening and the next morning my first task will be to get the Christmas trees out of the loft of our apartment.

I expect to be on the road again on February 2nd of next year. I cannot really give my schedule yet as it could be subject to extremely much change as the company wants to run the next school class on board and we do not yet know when there will be room. However I hope to make Singapore my base in February visiting the Volendam, Rotterdam & Amsterdam and if that works out, I will be blogging about sailing the Far East. I will post the dates as soon as the plans come to fruition.

Thank you to all my readers, for being patient with my daily ramblings. I just hope that occasionally I produced a word of wisdom or un-earthed a piece of information that you found of interest.

Happy Holidays and a Prosperous 2015.  May you have smooth winds and following seas while sailing into the New Year.