The docks of Corinto are located on the river and that river ends in the sea south of the town. So the port is nice and sheltered but you first have to get there. The town straddles a sort of peninsula with the sea on one side and the river on the other side. And that sea can be tricky sometimes, if there is a long ocean swell running. Then the main thrust of that swell is under water as the energy amplitude of the wave system continues under water and stays there as long as the water is deep. When the water gets shallower and shallower the wave is “lifted or pushed” up and up and forced to disperse all its energy at the water’s surface. That causes high and short waves and can make a ship roll as a pig in the mud. Except the pig will like it, the people on the ship don’t.  Corinto is approached through a channel with about a mile of very shallow water on each side and that can cause very nasty waves. Sometimes so nasty, that the call at Corinto has to be cancelled. 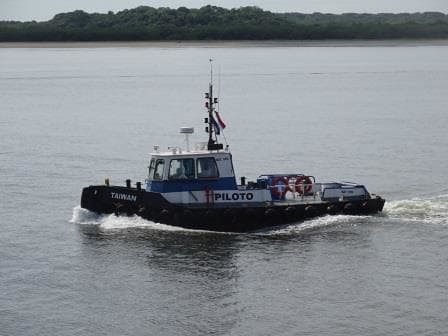 The Corinto pilot boat: the ms Taiwan. How (un) local can you get??

Yesterday I observed that there was little swell at Punta Arenas due to the calm weather in the North Pacific and today that weather continued and also here there was very little swell. So we were in business, the captain made his safety announcement urging everybody to sit down and in we went. The pilot has a new pilot boat since the last time I was here and this work boat is named Taiwan. Peculiar name for a Spanish speaking country. My hunch is that it must have been a gift from one of the container companies calling here. 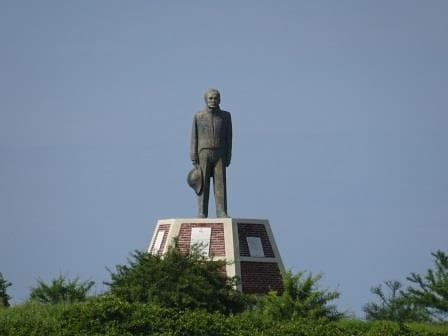 The statue of the national poet Ruben Darrio. Why not name the local pilot boat after him ??

When coming in, the ship has to make a sharp turn around an island on which top there is a white lighthouse. Right behind it on a pedestal stands a statue of Ruben Dario. He is the founding father of Nicaragua and the national hero.  It is not often that a poet is considered the man to look up to but here in Corinto it is the case. His name is Ruben Dario and the main elementary school in Corinto is named after him. 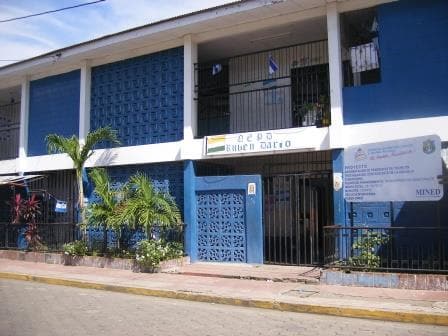 I have to use a photo from last year as a big tanker was standing in front of the school. But it still looks the same. The Holland America paint is holding very well.

By 10 am. we were docked in front of a container ship and guests could stream ashore for what turned out to be a very warm day. No wind and no clouds. I followed the stream of guests as I was going to have a look at the school. It being Saturday is was closed of course but the head teacher lives next door so hopefully she was at home.  She was not and I had an awkward conversation with another lady who was very suspicious about me ringing the bell. (Or better said, hollering for attention as there was no bell) Sometimes it pays off to be world famous (at least in Corinto) as suddenly a bright smile appeared on her face as she recognized me from a photo in the sitting room. 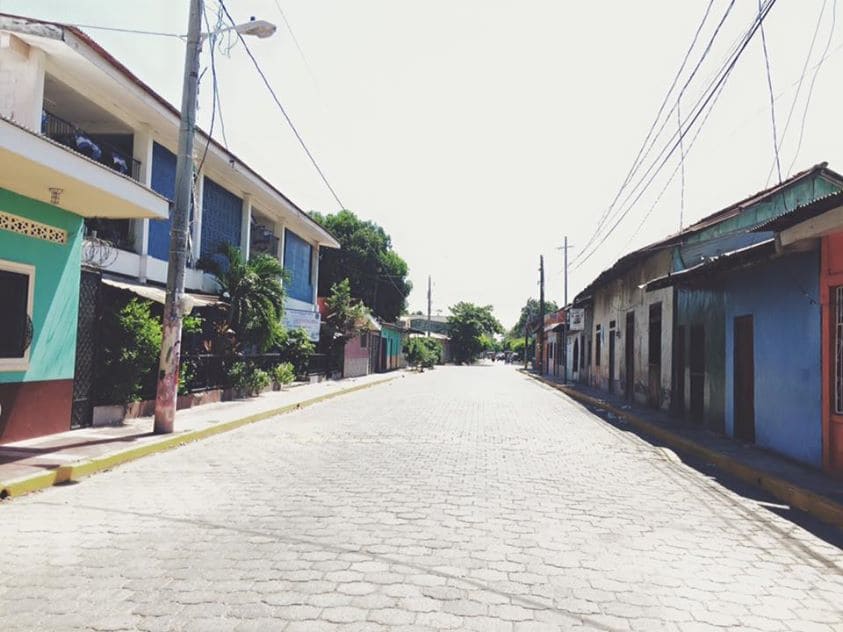 This is the cover page of their Face Book page. The school is to the left, nicely in blue and white.

Being world famous in Corinto, means you are also rich and I was directed to the little shop around the corner, where I once bought the corrugated roof plates and was pointed to the dry-erasers again. So I bought them all; $ 52, — covered the whole inventory, and they will get to the head teacher  somehow. Dry erasers seem to be a big issue in Corinto schools. The school is now going in recess as high summer approaches. I could not get in as the keys where with somebody else in charge. But I learned a new thing from her, one of the Statendam crewmembers had put the whole paint thing on You tube at the time. The lady knew but I did not. https://www.youtube.com/watch?v=PcGJwTjgMTw

So the little effort by Team Statendam in 2012 still lingers on and is not forgotten by the locals. If we could do it again remains the question as it gets more and more difficult to do things without having to go through a lot of red tape. Not just here but everywhere. If I ever get back here, courtesy of my schedule not changing at the last minute, then I will try for dry erasers again.

Tonight we sail at 18.00 hrs. and then tomorrow we are in Puerto Quetzal.  Weather is going to be hot, sunny and humid again: 89oF / 32oC.  Not good for this poor man as I have to go down in the tender with my sailor class to teach them tender maneuvering. Today I had the whole ship running around because of an un-expected fire drill. More about that tomorrow.