It was a sweltering day in Corinto and it was a sweltering day today in Puerto Quetzal. Although here we had about 10 knots of wind and that made it a bit more bearable.  Better than yesterday when there was hardly anything at all. We were the only cruise ship in port and thus we occupied the cruise terminal. Much to the relief of the bulkcarrier captains no doubt, who are otherwise kicked out of the port when there are more “Fur coat” boats  coming in. For them time is money as well and thus they do not like to be delayed by sitting at the anchorage for the day. Even more galling must be that those cruise guests who get preference are happily waving at you when they get in, and then even more happily waving at you when they get out of the port again.  So today nobody had reason to be upset.  But then it was Sunday and the people who normally like to be upset, as it gives them something to do, were having the day off or at least having Sunday lunch.

When I tried to raise Port Control to get permission to lower my tender, there was deadly silence. No other ships movement was planned until 3 pm. so they were all having a nice Sunday lunch I suppose. Every ship’s captain knows how that works and in order to avoid somebody getting upset when they return from lunch, the purser normally has a list with requests prepared and then has it signed  (and stamped) by one of the officials coming on board to clear the ship. And once we have a stamp; we are in business.   Puerto Quetzal has even gone one better; they have their own list to make it easier for the cruise ships, so we do not even have to ask. Thus I already had pre permission to lower a boat as long as I strayed no more than 30 meters away from the ship. The local authorities do not want us to get lost in their port. But we normally call in as a courtesy to let them know what we are doing where and when.

And so today four new sailors were introduced into the secrets of operating a tender with two engines, two rudders, and how to use those to come alongside and sail away from the tender platform.  We only had ten knots of wind but an empty tender lays as an egg shell on the water and thus drifts, and that concept takes time to understand. So for the first few attempts I had some deeply concentrated sailors trying to bring the tender alongside and either missing or bumping into the platform.  But once they really believed my phrase “use the wind as your friend” it started to improve by leaps and bounds.  To be continued tomorrow. Then they have to do with only one engine. 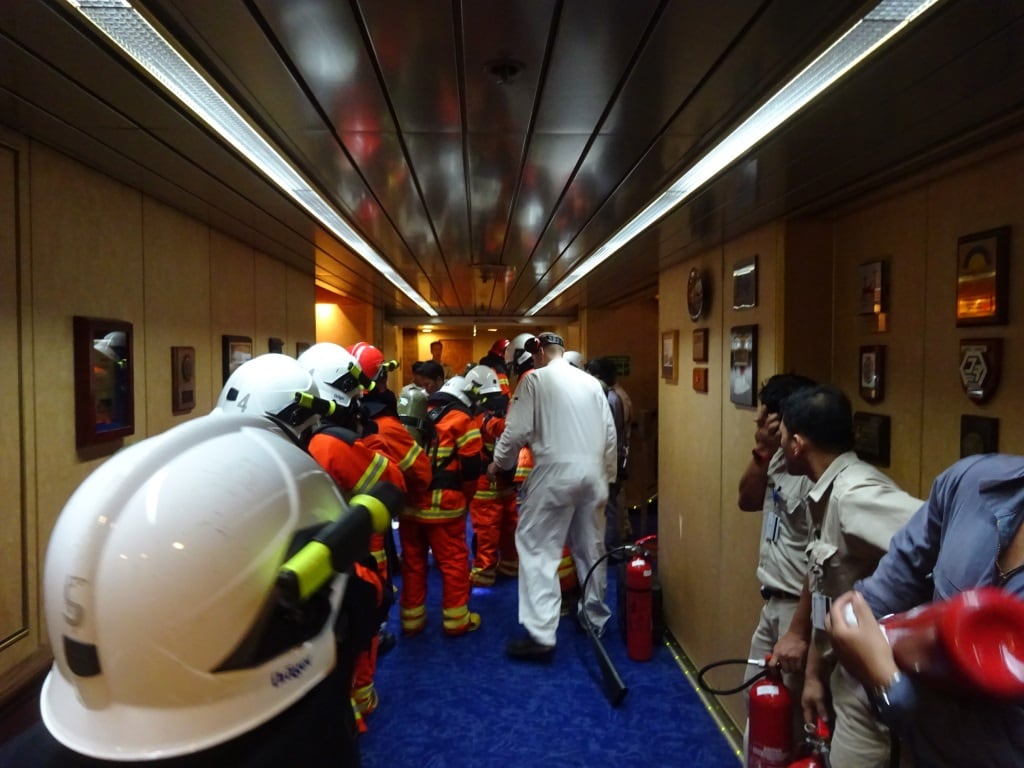 Somewhere near the fire, but safe, there is a staging area where everybody meets. Here an engineer is checking if all the gear is properly in place before a team is being send in.

I still have to explain the “un-expected fire drill” of yesterday. It is company policy (and all shipping companies are the same) to stage on a regular basis an un-expected drill. Nobody has already been thinking about it, nobody is mentally prepared, and if it happens at a time when “nobody in their right mind” would do it, then maybe it could be for real. Then we get the adrenaline going and suddenly all the trained routines have to be executed under pressure as “it might be for real”.  It is always difficult to keep things quiet on a ship as it is one big village, and its inhabitants love to gossip, but with me around, the captain has the extra card up his sleeve as I can avoid anybody if needed. A second item we have to train is fires in port. Then 50% of the 4 fire teams might be ashore and then the On Scene Commander has to combine whatever he has available into at least two attack teams. So we combined those two things yesterday and at 14.15 I have everybody having a near heart attack by simulating a fire  in the electric power station of the winches. 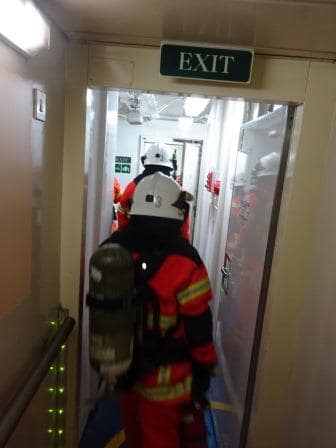 8 Minutes from happily having an afternoon snooze to be fully alert and in “full combat gear” approaching the fire is not bad going.

What do we look for: response time, still following the correct procedures and no short cuts, correct announcements and staying on the ball once it becomes clear it is a drill. I was really impressed with the response time, 8 minutes from jumping out of bed, to be fully kitted out and sitting in position behind a hose and a CO2 extinguisher and ready to enter the compartment where the fire is. And behind that attack team all the backup & support teams are in place to make sure everything is done safely. Such a drill does not have to take long, it is about the response and the time needed to surround the fire and once surrounded, getting it out is not so difficult. Thus the whole evolution was over in 20 minutes. So I could give compliments to everybody although it did not mean they were very happy with me but then life is never perfect. The captain made an elaborate announcement afterwards about the why and the when and then also the guests understood the importance of it all. And my apologies for waking those up who had just settled down for a nice nap after all the excitement of Corinto port.

This evening we sail at 19.00 hrs. and then our next port of call is Puerto Chiapas. This can be a nasty place to get into to if there is a high ocean swell running, but at the moment the Pacific Ocean is really peaceful so we should have no issues what so- ever.  Weather for tomorrow; same as today. Chiapas is only 140 miles away from Quetzal and without a mountain ridge in the way, they share the same heatwave.