The Pacific Ocean remained Pacified and docile today and thus we sailed into Puerto Chiapas without any problems. No rolling and hardly any yawing (ship behaving like a dog’s tail) on the waves who roll under our square stern and then try to lift it up. But because the ship is moving forward, the angle is constantly changing and then the stern starts a sort of cork screw swaying motion.  The quartermasters behind the wheel find it then nearly impossible to keep the course and then the only thing the captain can do is give rudder orders and “catch” the ship by anticipating the next movement. But nothing of those troubles today, it was very quiet at sea and docking was a routine affair.

Today it was my pleasure to create – controlled – havoc in the Hotel department. We had our General Emergency drill this morning —- all crew in action —- and my focus was on the Hotel staff. Two years ago the company restricted our safety setup by re-aligning everybody’s duties so it was much clearer to see who was doing what and who checked on whom. For that propose the organizational influence of the Hotel Staff was increased and the Captain and his bridge team stepped back and only kept overall control. From that moment on, the Hotel Director was organizing all the movements of the crew and guests, once the Master of the Vessel had given the order. 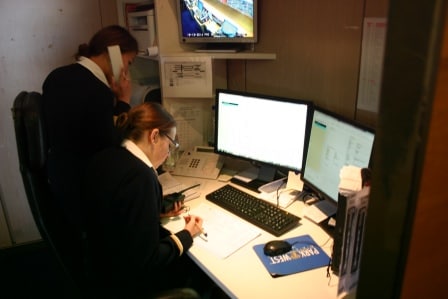 Two of the 10 Ladies and Gents of the Muster Control Support Team who keep track of 1400 guests and 650 crew.

The Hotel Director is now called Muster Control and the front desk Muster Control Support Team. They have to make sure that everybody on board makes it to their lifeboats and liferafts. For that they have a plethora of teams available to help with searching in case people get lost, do not want to report, do not want to participate, or had an accident. Those teams have to be trained and kept on their toes and that is where I come in to stir the pot a little bit.

So what we did today, I parked 5 cadets and 2 officers in the ship, two in cabins, two in public rooms, two in crew area’s and one in a handicapped toilet. Then I just watched to see if a: they would be found, b: what follow up the finding-team would provide and c. most important, would the person who was found end up at the correct lifeboat/life raft station and was this all properly tracked by the Muster Control Support Team.  The objective is to be able to report to the Captain: “everybody accounted for, and all ready to disembark the ship”. 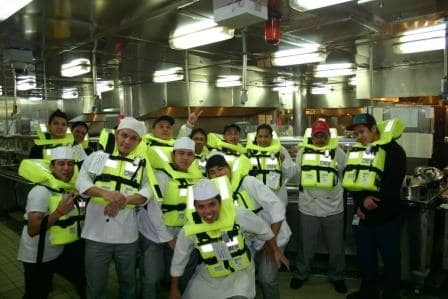 This is the Crew Sweep Team made up of cooks and kitchen helpers. They check/sweep all the crew area’s to ensure nobody has been left behind.

By now my reputation is travelling ahead of me, so the teams were expecting something and were ready to roll. However the handicapped toilet was one they were not expecting. I had put a cadet in there and as soon as the alarm went, he pushed the emergency button which all our toilets have. These buttons are tested once a month and if you push it an alarm goes off in the Front Office. Company routine is then for a Front Desk attendant to grab VHF, grab the AED and go and investigate. This all went according to protocol and then she heard a person hyper ventilating and being very unhappy in general, inside. Next step obtain the Emergency master key from the Hotel Director and open the door. Based on the initial report of the Front desk attendant, Muster Control relayed the message to the Bridge (which we call Command & Control during emergencies) who alerted the medical team. By the time the door was opened, medical was present and “the patient” could be treated. It took less than 4 minutes to have the patient out and cared for. The cadet inside was quite happy as he had five Ladies fussing over him. He was taken by the stretcher team to one of the ships tenders as our medical staff are all assigned to a tender. Tenders will act as a sort of ambulance when all the lifeboats and life rafts are in the water, making it possible to get medical help very quickly to one of the other boats.

All missing peoples were found before the captain was giving the order abandon ship and thus Muster Control reached its objectives. Leaves one Philipinna Lady who is very upset with me as she thought that the person in the toilet was a real emergency as it looked as if he was almost collapsing ………… Well I cannot be blamed for having a cadet who turned out to be a very good actor.

The coming two days we are at sea, sailing along the Mexican coast. From the far south (Puerto Chiapas) to the Far North (Baja California) to reach Cabo San Lucas.  We are expecting sunny weather and our hope is that there is no Tehuantepeccer blowing tonight which might make the ship list.