This is a most peculiar place to visit as you have two options. In the good old days, we could only go to Puerto Caldera, which is the cargo port in the province of Punta Arenas. The provincial head town had a small pier as well but not suitable for our activities. So when we docked we had buses and taxis for those who wanted to go to Punta Arenas about 15 minutes down the road. Most guests go on tour in Costa Rica but for those who did not want to go on tour and for those who did not want to go to Punta Arenas there was a big flee market setup in the cargo sheds. Puerto Caldera dock is located behind a nice breakwater and protected from the sea swell for most of the calls and thus very much liked by captains. Happy Taxi drivers, happy vendors, happy captains as the ship lays stable against the dock. 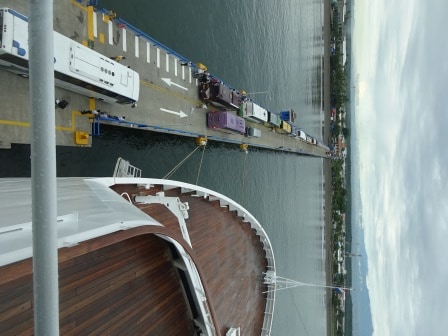 The Veendam docked at Punta Arenas. The tour buses back down all the way from the beginning of the pier as there is no room to turn.

Then a new pier was built so we could dock with our nose straight into Punta Arenas downtown. That created for very happy shops and very unhappy taxi drivers. For the tours it did not matter, all the buses still parked outside the ship. For the captains it was less straight forward. Offering the best location for your guests is something you want to achieve but the new pier had some challenges. 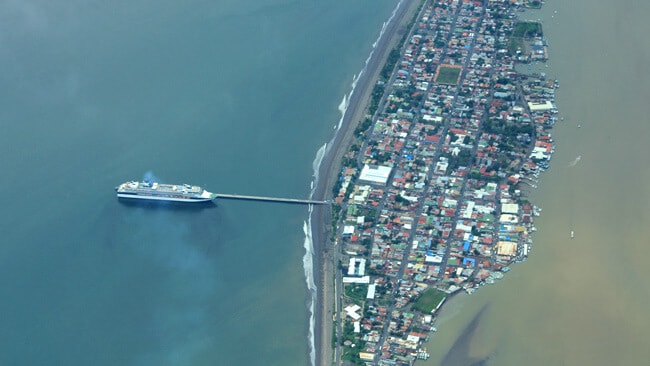 The new pier sticking right into the open waters.

It was not sitting behind a breakwater so the swell ran in freely. This can make the ship bounce and surge along the pier if there is a long ocean swell running; and a moving ship creates problems with the gangway.  The other thing is the current. The pier is right in open waters and up to four knots of current can freely run under it. Four knots of current is not something you can control with your thrusters. Thus you have to synchronize your arrival and departure with the time that the current turns, slack tide. Which is not always at the same time and thus absolutely not in synch with the cruise brochure. Thus sometimes the Captain has to get the ship in much earlier (sail a lot faster than planned, burn a lot more fuel) or come in late and that affects the departure time as the tours still go with the duration.)

Today we were lucky. The turning of the tide was around 06.30 and for a 07.00 hrs. arrival it was just perfect. Departure was less of a problem as the current was going to push the ship away from the dock anyway. And it had been quiet in the Pacific and thus there was only a very low swell rolling in and the ship hardly moved. On top of that it was overcast and it hardly rained; all things came together today. 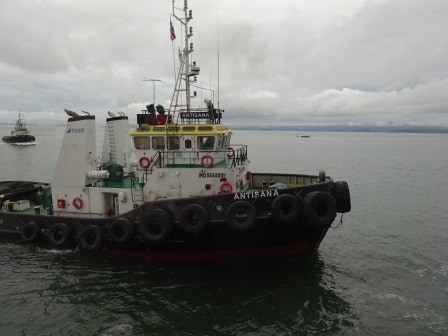 There are two strong tugboats on location to protect the pier in case the tide is misjudged. Looking over the bow you can see the pilot boat on the buoys observing the current.

What we do when we get there, and to make it alongside; the pilot parks his pilot boat on the nearest buoy and that provides him with information about the moment the current goes down to zero, a bit further out in open waters. The ship is in position about 300 feet from the dock where the current is already so slow it can be kept in position with the thrusters; and the moment the pilot boat gives a cry, the ship starts moving and then  it has a good window of opportunity before the current starts running again. 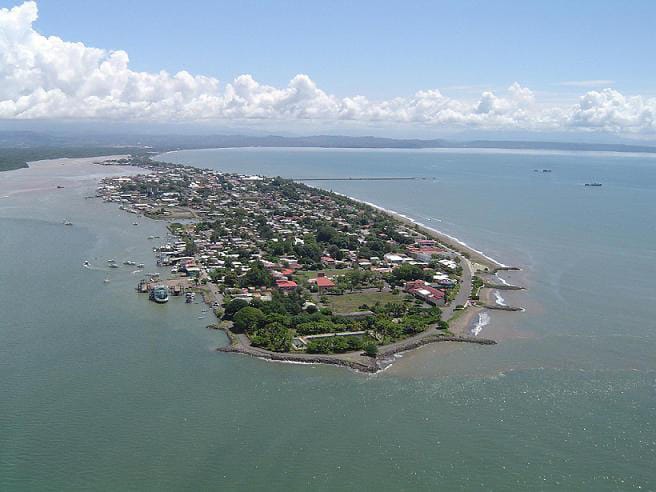 Punta Arenas. (Courtesy  from somewhere on the internet)

Punta Arenas itself is located on a sort of long and narrow peninsula running along the coast of the main land. Which is one of the reasons there is such a strong current, as the water finds its way around the peninsula to the North side.  In the last few years, no doubt because of all the cruise ship money coming in, the place has been considerably spruced up and a large part of “happy town” from the old days is gone and replaced with an open air theatre.  To my regret the little shop which sold postcards ………… old ones……….. was gone as well and replaced with a T shirt shop. I was a very happy camper a few years ago when I went by taxi to town and found this little place which sold antiques (sort of……………. Let’s say old stuff) but had a lot of old postcards from Panama and San Jose (Capital of Costa Rica). I have never seen an antique shop like that anywhere else in Middle America. But there it was and I made the owner very happy by ensuring a major donation went into his retirement fund. (Maybe that is why the shop is gone) 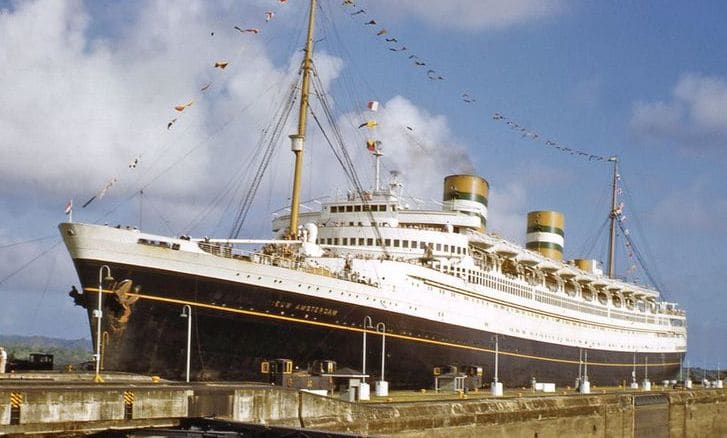 A postcard which made me very happy. The Nieuw Amsterdam of 1937 in the Panama Canal anytime before 1951.

Tomorrow we are in Corinto, Nicaragua. I hope to visit the school which we sponsored when I was Captain on the Statendam. Last time when I went for a look, they were closed for vacation but the school looked good from the outside. We had left some pails of paint behind and the parents had followed up by turning the school into a wondrous picture of Holland America white and blue.

Weather for tomorrow; As Corinto has less tropical forest than Panama and Costa Rica it is a lot drier. So tomorrow we are back to sunny skies and temperatures around 84oF / 209C. with hardly any wind. It is going to be challenging for some of our guests.