It remained slow going after we left the last locks and by the time we made it to open seas, it remained slow going. It is the time of the year that the Right Whales are in the area. I explained on 16th or 27 October that we had to be very careful with the Right Whales and because they are spotted in the area of Panama Bay around this time of the year, a slow zone has been ordered. Important to do, and the right thing to do, but being already well delayed it made it even harder to get to Gulfo Dulce on time. I wrote yesterday that by 17.00 hrs. we were back on schedule; yes we were back on the Panama Canal schedule, not on our own planning and sailing schedule.

To make it easily to Gulfo Dulce we need to be at the Panama Canal Sea buoy at around 17.30 and then we have a little bit of leeway in our schedule to take care of the Right Whales. By the time we now made it past the right whales we were running about 3.5 hrs. late. And that meant no call at Golf Dulce. We normally made this an afternoon call and sail in the bay between 2 and 5 pm. Now we would have made it there by 5 pm and the sun was going to set at 18.14. An hour there does not make sense, thus the captain could only decide to forgo Golf Dulce.

For today it did not really matter as the rain was so abundant over the coastline that we most likely would not have seen anything at all. So we stayed at sea and sailed on to Puerto Caldera / Punta Arenas in Costa Rica.  The captain announced the news at 09.45 and then at 10.00 I started with my HAL lecture in the show lounge. So one captain had to bring some bad tidings and the next captain was able to bring some happy tidings and good stories about all the “Dam Ships” from past, present and future. Maybe I made up for missing Golf Dulce.

Our course line will now basically follow the Pacific Coast while we hop from port to port. In the coming days it will be busy for our guests, as day after day we will visit Costa Rica Punta Arenas , Nicaragua Corinto, Puerto Quetzal in Guatemala and then Puerto Chiapas in Mexico. Only then we will get two days at sea to recover before we come to our final port of Cabo San Lucas at the southern tip of the Californian Peninsula.

Our first port, Punta Arenas in Costa Rica is located deep in a bay, the Golf de Nicoya. So it will take a considerable time to get there, while the ship has to sail through the local fishing fleet. Then Corinto is located on the banks of a river and also that takes extra time to get there. Only Puerto Quetzal has a short distance between the pilot station and the dock. But there we still arrive early to facilitate the shorex flights to Tikal by plan, and that plane takes off at sunrise, so we have to be docked before.

Early days are coming not only for the Captain and the Ships officers but also for the guests.  Who said cruising was relaxing???????????.  Thus today having a full quiet day at sea, might not have turned out that badly.  Looking at the rain from behind a ships window is a great way to relax and several locations of gentle snoring were prevalent on the outside decks and in the lounges. So guests were exactly doing that. 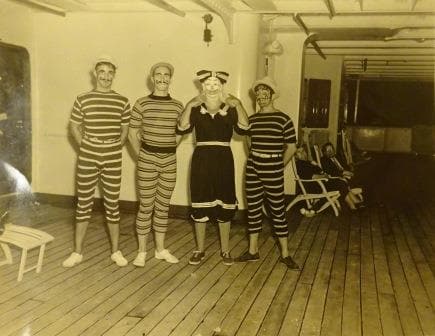 The day was Sept. 7 1939 and the ss Nieuw Amsterdam was on its way from NY. to Europe. The occasion is not known.

One thing I would like to share today are a few photos which were given to me by a Lady whose father in law worked on the ss Nieuw Amsterdam in 1939. Also in those days the crew knew how to enjoy themselves with a good fancy dress party. What is special this time, the lady still had the 1920’s bath costume including head dress in her possession and brought it on board to show it. She certainly found in me a very interested audience. 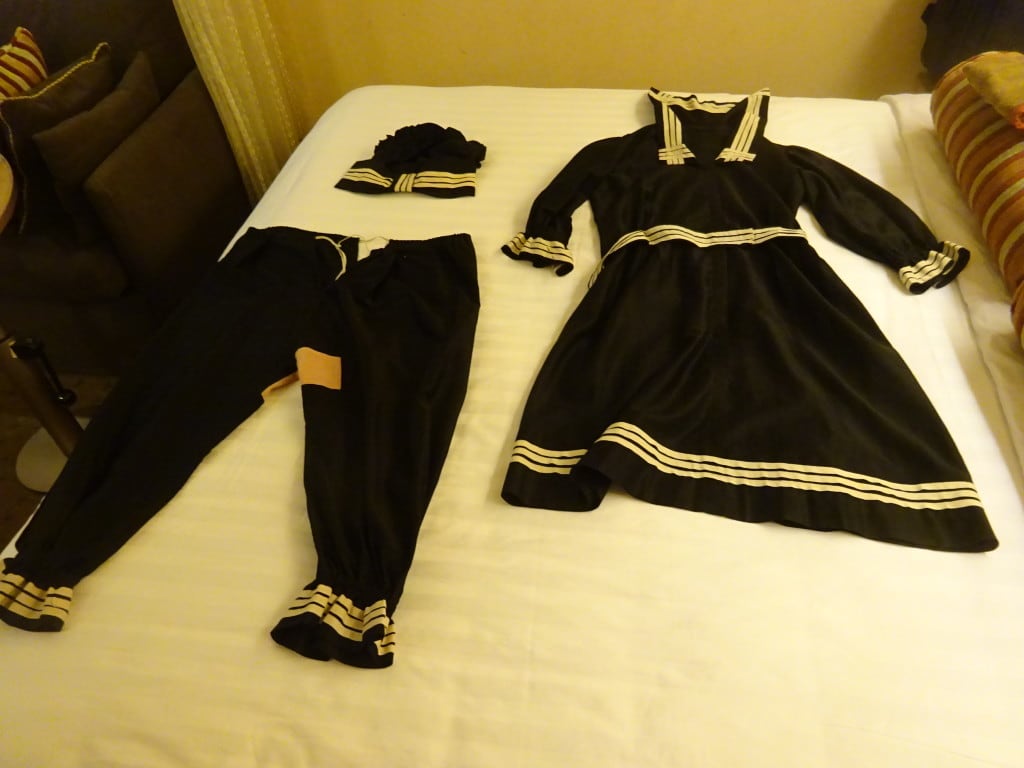 The most amazing thing after 77 years the costume was still in the family and in good quality. Although I think the costume is much older, most likely from the 1920’s. Which would make it nearly a 100 years old.

Tomorrow we are in Punta Arenas, at least for the moment this port is on the schedule according to the Captain. We have to arrive there by slack tide which this time is at the very convenient time of 06.30 in the morning.  Weather?:  maybe rain, maybe sunshine, it will all depend on which way the wind is blowing the clouds.