And thus we arrived at the breakwaters of Cristobal at 05.00 hrs. and then nothing happened. Same for the Zuiderdam; they had arrived even earlier and nothing happened for them either. For some reason the planned convoy scheduling had gone awry and the cruise ships kept being put back. 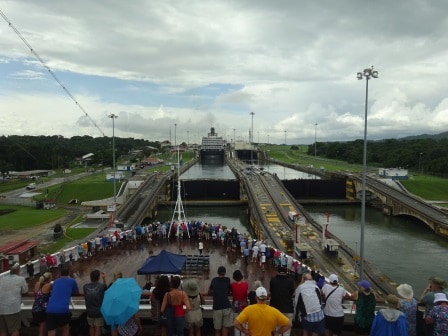 The ms Zuiderdam one lock ahead of us. She was going into Gatun lake and then back for a call at Cristobal/colon

Thus it was not until 07.30 before we got some action and could follow the Zuiderdam in. Both of us were going through the old locks as it was now clear that the Panama Canal Authority was going to keep the regular ships separate from the Post-Panama max ships; those who can only go through the new locks.  We were all thinking it was going to be a long day, but later on we managed to catch up a bit and by the time we came to the Miraflores locks we were back on the original – published –schedule. How long a transit takes, depends on the slowest ship in the convoy and today we were unlucky as we had some real slow boats (deep laden tankers) ahead of us. I did the transit once in just over 6 hours and faster has happened as well. But today we had a regular day, with a lot of starting and even more stopping.

The weather was wet, with a constant drizzle or stronger all during the day. Negative is that you get wet, but the positive things outweigh it; the rain is not very cold, you do not get too hot and you do not get a sunburn.

My interest went out to the new part of the canal and unfortunately you can only see a few things of it. Now all the construction is gone and everything is flat there is not much to see unless you go through those locks. 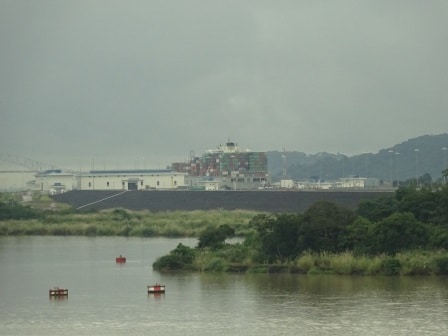 A Post Panamax Container ship going through the new lock at the Pacific side.

Because there are no trains “the so called Mules” used in the new locks, it all looks basically as a series of basins with water in it and in some of those basins a very big ship floating. 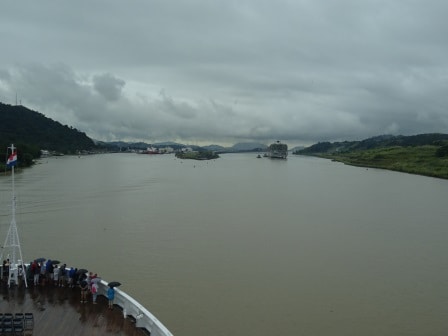 Now all construction materials and ships are gone, the separating dykes are gone and the water ways to the new locks are open, you can see very well how they have done it.  Once you have sailed past Cristobal you come to a Y fork in the road, with the left arm being wider than the right arm. Left is the way to the new locks.  Same thing happens again when you come to the Pedro Miguel locks where the Pacific locks are located and again a Y with now the left arm for the old route and the right arm for the new route.  From then on it looks a bit strange.  The new Pacific locks are near the last set of old locks, the Miraflores locks but the ships following the old system are already descending with one step at the Pedro Miguel. So we have a big dyke which keeps the right arm of the Panama Canal from draining into what is now the lower part of the Canal. 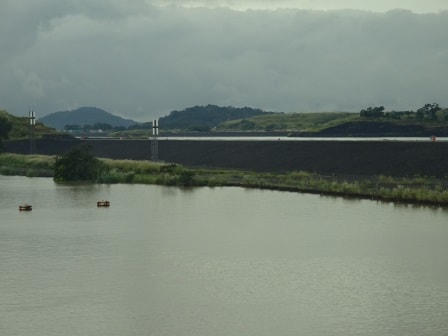 The big dyke which keeps the waters separate. Note the little tugboat in the photo. You can hardly see it, so big scale is everything.

You are used to those dykes in Holland where you can see a ship sailing by about 20 feet above a car in the road. But to see it in Panama which is basically flat apart from the Continental divide is a bit unusual. Luckily all the dredging for this area was done by the Dutch so I have full faith in the dyke being capable to hold the water, regardless the size ship that sails through it. 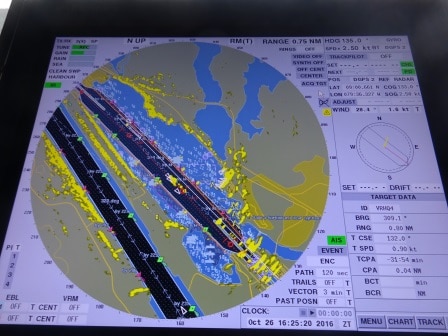 This is what it looks like on the Radar screen. the new part is as straight as an arrow. While the old part retains much more of he original features from 1914.

For the guests it was also a long day as many were up and about just after 5 am. Luckily we know that this happens and thus the Hotel Director had ensured that the Lido Restaurant was also open at 5 am. so the lack of Panama Canal to see could be compensated with food. Always a good alternative. For the same reason the Bars were very busy in the afternoon. What is better than to have Happy Hour in the Panama Canal? 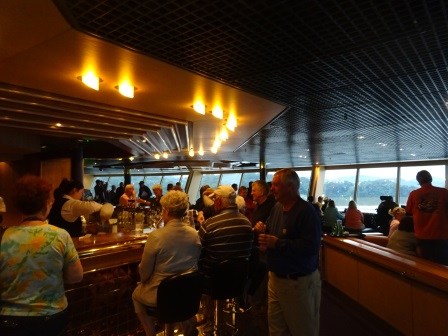 This is Happy Hour in the Crowsnest.

While I am writing this we are about to leave the last locks of the Miraflores and then it will be another hour to open sea. From there onwards we follow the Coast of Panama until we come to Costa Rica. Tomorrow afternoon we will be sightseeing in Golfo Duce and then the next day visit Punta Arenas or Puerto Caldera in Costa Rica. These two ports are next to each other and are interchangeable, so we will see where we end up. The weather will not be much different if it rains in Panama it also rains in Costa Rica. Maybe the weather will run out of water for a few hours and we have good visibility.

17.00 hrs. the ms Veendam in the Miraflores Locks. (Photo courtesy of my Lord & Master Lesley who very patiently  followed the webcams and tracked our progress)