I was running around by 05.30 in the morning as I had supervision and support of the new junior officers on my schedule. So I had the enjoyment of seeing sunrise over Cartagena and the pilot boarding. Before twilight started there was a nice light show in the clouds of big electric discharges but with day light approaching that all disappeared. Also the rain disappeared and thus we had a nice dry day, but it was very sunny and very warm. The Zuiderdam was just ahead of us by about 15 minutes, giving just enough time for the linesmen in the port, to tie up first the one ship and then the other one. No other cruise ships in port today so it was a Holland America only show.

Sailing into Cartagena takes about an hour as the entrance to the Bay is in the South West and then you have to sail north to get to the cargo docks. For the docks where we are going, the old cargo docks, now all container, it would be so easy to cut through a canal in the west side and get us in and out in about 30 minutes. But it is the expensive part of town with all sorts of high rises (every year there seem to be more) being built and it would not help the rest of the port.  The whole of the east part of the bay, which is mostly known as the Boca Chica, is full of oil terminals, tanker docks and a lot of related industry. They all use the same entrance and they would continue to use the entrance we used this morning. So no preferential treatment for the cruise ships. 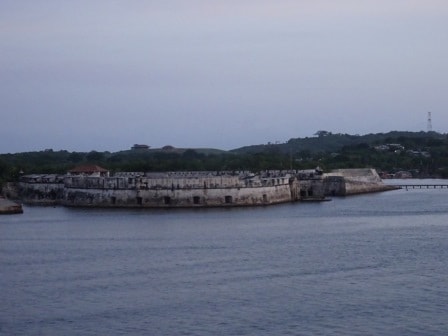 Because of its natural and large sheltered harbor the area has always been a hot spot for countries that were convinced that they had to rule the world. As there were many countries who thought so, the one who was there first (or who had just kicked somebody else out) built defense structures to make sure they themselves were not going to get kicked out later. Until today those defense works are still there and the space for us to sail in, located between two forts, still has the same width as it had 500 years ago. Luckily they already thought big in those days and thus our current big ships still fit through the channel. 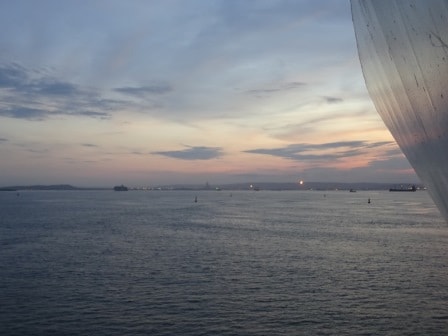 The light spots are the flame off towers of the Refineries  in Cartagena. To the left the Zuiderdam going ahead of us.

But it is one way traffic, so once the Zuiderdam had slipped through, we had to wait until a small cargo vessel came out and then we could go in. There is a leading light which can help you to stay in the middle of the channel but it is hardly visible due to “light” pollution by the refinery located behind the leading light beacons. They are burning off gasses which come free with the production of oil. When the oil price was still high, they caught the gas and it was sold for export. Now with the oil prices being fairly low, it does not seem to pay any more to do so and thus they burn it off. Using it for local heating is not an option either as Cartagena is already hot & warm enough by itself. But a leading light is not so much of a necessity here. As long as you are clever enough to stay between the buoys you are in good shape. 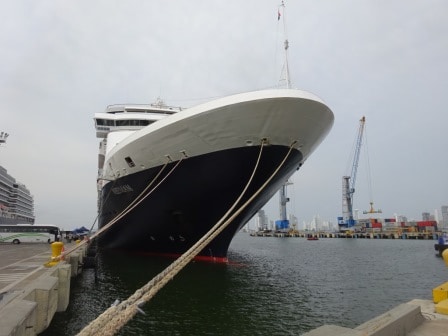 Where we now dock used to be water. The old cargo docks were much deeper inland.  I still have docked there with the old Statendam in 1981 but then a few years later, the old cargo sheds were ripped down (and approx. 2 million or so rats were made homeless) and the dock foundations were filled over to provide space for container parks. New piers were then built further into the inner harbor and that is where we dock today. Once you could walk to “downtown”, well a sort of downtown, the sort of downtown sailors liked, so it was really THE downtown but now you need a tour bus or a shuttle to get in or out of the port. The “downtown” I am referring to is long gone as well as crew hardly has time to go ashore and with the increase in ships size, and same crew complement, the number of visiting crew had dwindled considerably. So now “downtown” is near the business district and we are stuck and can only look at containers. Or at the Zuiderdam being docked next to us. 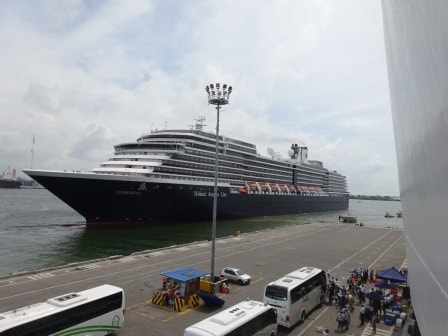 The Zuiderdam departing. She came in first and she went out first.

As mentioned yesterday both ships had a short stay, as both ships have to be at the Cristobal breakwater entrance for the canal at 05.00 hrs. So we sailed out at 1 pm. and put the pedal to the metal once we were outside. We have to make the Panama Canal slot to fit in the convoy as the Canal does not wait for anybody.

Our schedule………………… subject to extremely much change:

06.00 Inside waiting for clearance.

As you can see, no new locks, but maybe we will see the Zuiderdam using them.