We caught the tail end of the frontal system in the morning and it gave us the occasional shower on the deck until lunch time and then we were past it. Now we are slowly starting to come under the influence of the land mass of South America where much is covered by Jungle and that makes for a totally different situation. Hot and Humid with lots of electricity in the air and thus we can expect thunderstorms tomorrow. Hopefully it will happen before and after our arrival and departure in Cartagena but that is something we cannot plan for. We will only be a short while there, from 07.00 until 13.00 hrs. as we have a tight schedule afterwards to make it to the Panama Canal on time. We will meet up again with the Zuiderdam which will sail with us to the Panama Canal as she is doing the sail in – Gatun Lake – sail out routine and then goes to Colon/Cristobal for a late afternoon stay. We of course go straight through as we are on our way to San Diego.

This will be my first time going through with the new locks in operation and I harbor a small hope that we might do one of each, an old and a new one, but it is a very tiny bit of hope and a lot of wishful thinking. Thus far the Panama Canal Authority has not much been in favor of letting a cruise ship do both but “hoop doet leven” as we say in Dutch or “Hope keeps you alive”. Tomorrow during the day we will receive the transit schedule of what the Canal is planning to do with us ——— subject to extremely much change———— and then we will know more.

The planning for the Canal takes some doing and it already starts when the ship is built. As the Canal has different measurement criteria for a ship, the ship is measured at the end of its new building and then it gets a Panama Canal Tonnage Certificate. During its first ever transit; it is quite customary to get officials on board, who sail with the ship during the transit, to verify if that initial certificate is valid. They always seem to be very interested in pools and Engine sky lights as there the rules seem to vary greatly from the regular register tonnage certificate to what Panama wants. And then they return when needed.  I can understand this quite well, as cruise lines keep tinkering with their ships and here the Veendam is a good example. In 2006 we had the Club Hal added to the aft top deck, creating a lot of extra volume and then in 2008 extra cabins were added. At that time we lost a deep swimming pool but we gained a wider shallow pool and extra Jacuzzi’s. Enough changes to keep a tonnage verification officer in bonus for quite some time.  Last time I spoke to one of them (who came to check the new cabins on the aft deck of the Prinsendam) he was musing about how the new slides on the Mega Liners would fit into the equation. On the earlier ships slides had been open on the top. Now on the larger ships the higher up parts of them are enclosed, so you water-slide through a tunnel. But the big question of course was for him would an enclosed water slide bring in more money for the Panama Canal Authority. I never found out the answer but it was an intriguing thought. 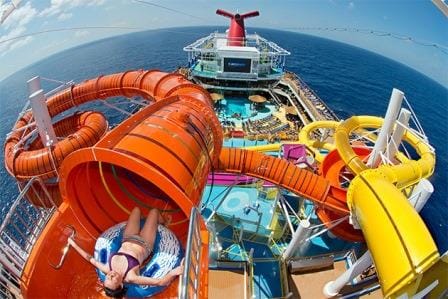 This is the water slide from the Carnival Vista. Partly enclosed, partly open; What would Panama think?

For the normal routine of the ship and the transit, you have to start sending your ETA’s already 3 days before. This is something really meant for cargo ships as they are not as reliable in their scheduling as a cruise ship but the rules are the same for everybody. Then about 48 hrs. before we have to call them. This is an Oil Pollution Prevention exercise. By calling in, the Canal Authority knows that we have read the regulations and thus know what is expected of us by them in case something happens.

Getting into Cartagena takes more than an hour as we have to sail through the inside lake towards the very sheltered port of Cartagena. So tomorrow morning we will be at the pilot station of Boca Chica at 05.30 am and then sail in either before or after the Zuiderdam but that depends on what the pilots want for their docking sequence.

For the weather, it will be hot and humid and it will be everybody’s guess how much fireworks we will get out of the rain clouds. 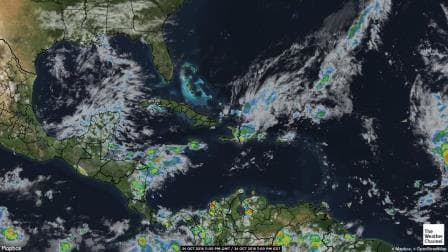 You can see the yellow/red spots over Colombia and that means dense rain clouds. (Courtesy www.weatherchannel.com)