As it was a crystal clear night, we could see the bay of San Lucan already from far away. Ahead of us was the Celebrity Infinity which was going slower so we started to overtake her. The Statendam was assigned anchorage number three, which is the most outlying one and a real bad one if it is a windy day as this wind is pushing the ocean swell into the bay. Also it is a very long tender ride into the harbor.  I could not really understand the decision of the harbor master to assign the ship that was staying the shortest period in the port to the most outside anchorage, thus giving those guests the least amount of time to spend ashore but that was what it was, so be it.  I had however arranged with the agent that I could stay on the engines on arrival, right on top of the harbor entrance and thus reduce the tender distance considerably. That would at least mean that we could get the guests ashore in a very rapid way. There is not much space to float around there as it is in the proximity of anchorage one, but on a wind still day the ship does not drift, so by gently maneuvering it is safe to do. So I did. The authorities came on board timely and by 0715 we had our show on the road as they call it. 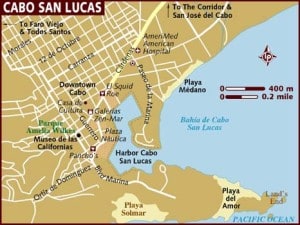 Anchorage nbr 1. is where the S of SanLucas is in the chart.

Anchorage nbr 2. is where the lower O of the mile stick is

Anchorage nbr 3. is where is lp sign is at the right hand top.

The Carnival Splendor had been assigned anchorage number one and when it came in an hour later, it sailed nicely between us and the Infinity to its position. I moved a bit astern to give it more room and all was well in the world. Then by 09.00 the wind slowly started to pick up and I had to move further out to allow for some drifting on the wind. By the time that I was at a good location our tender platform was coming under the influence of the swell running around the Cape. So the next brilliant idea was to use the Infinity as a “breakwater” by anchoring to the North of her. Not exactly at the assigned anchorage spot, but at roughly the same distance from the port just closer to the shore; which was possible in this case as the wind would keep the ship away from the shallows anyway.

That worked perfectly until about noon time. Then outside in open waters the wind whipped up to about 35 knots from the North West, which meant that at the anchorage we got about 20 knots. The High mountain ridge protects the bay from most of the North to Southwesterly winds.  However it does not protect you from the waves and swell whipped up by these winds and pushed by the wind they nicely curve around the Cape into the bay. Then they run up to the beach from where they bounce back as the beach is not a gradual slope here but more of a steep wall, at least the underwater part.  As a result the swell was now bothering the tender operation on both sides of the ship. Thus I had to start maneuvering again but the constant lee making slowed the tender service down considerably. To deal with the great distance we had two extra tenders rented from the shore in operation, but the disembarking of the guests from the tenders into the ship took a lot of extra time.

In the end we got everybody safely back and then I put the pedal to the metal to catch up with the schedule and to arrive on time in Sand Diego, the day after tomorrow.  Once around the corner we got the full brunt of the wind, wind force 7 from the North West and the Statendam pressing against it with a wind force 5, so it felt like hurricane winds on the bow. This un-expected wind was caused by a low pressure system shifting from the middle of the Ocean onto the Mexican coast thus causing the wind to blow directly over the Cabo San Lucas area.

So we had a challenging day today. Tomorrow the wind is supposed to die down again and by the time we arrive in San Diego it is supposed to be wind still.

Tomorrow is also our last sea day and it starts at least in a good way with one hour back to get from Mexican to Californian time.  I just hope that this wind will not get the chance to build up too much swell as that will slow us down and the schedule is tight to get to San Diego.