The weather forecast was, for once, right and in the early morning the wind abated from a wind force 7 to a wind force 4. That meant that the swells are not building up as high as I feared that they might do, and thus we will be able to maintain our required speed. Apart from unforeseen circumstances, we will be on time in San Diego tomorrow. There was some swell out there and on occasion we saw the ship pitching about two to 3 feet but as that is not enough to make the ship’s bow slam on the waves, the influence on the shipboard operation was negliable. So we happily sailed along; along the coast of the Californian peninsula for the whole day. Sometimes with a view but in the afternoon further away from the coast as we are sailing on a straight line and the coast was curving away at times.  During the night, we were overtaken by the Celebrity Infinity who can maintain a higher speed and she came blasting by with over 22 knots. I am quite happy that I do not have to pay their fuel bill. The Infinity is arriving about 1.5 hrs. ahead of us at the cruise terminal as she needs all the extra time to disembark double the amount of luggage as we have.  Although on a shorter cruise, so in principle less luggage but with 2500+ people on board the total is still much more than we have.  On departure they have the same issue with more loading and although they always try to get out at 1600 hrs., they normally never make it and still leave after us, while our departure time is 1700 hrs. and we normally can adhere to it. 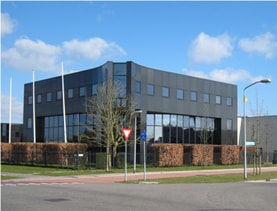 Today we had something else of interest on the bridge. Our Carnival Corporation Head Office operates a bridge simulator in Almere in the Netherlands. It was first pioneered by Princess Cruises but is now used by all the Carnival Brands on rotation. That makes sense of course; such a simulator is very expensive to build and to maintain and becomes much more efficient if it is being used by over a 100 teams of deck officers than just by one company. By next year they should also have an engine simulator up and running and then we can do training together with the engineers. That will be of great benefit because at the moment we cannot really train for black outs and other technical mayhem, but once their simulator is up and running we can do so. 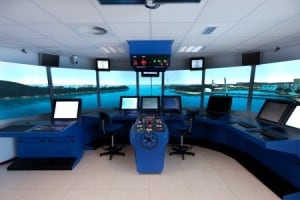 The S-class model, to which the Statendam belongs, is an ideal ship size to maneuver with, as it has all the gadgets you can think of, including the Becker rudders. These are great to use, but at the same time very powerful so you also have to learn how to optimize them. That S-class computer model has now been in use for awhile as the simulator was opened about two years ago. Now working with it, the operators are finding out that the Ship model is not prefect. A captain knows exactly how his ship reacts and if it does not feel the same while in the simulator then he will voice his displeasure very loudly. (We are very good at that…………..) In the end the technicians get back to you of course with requests to do more measurements so that the model can be refined.

And that was what was happened today. We received a request from our Director Nautical operations if for the coming month we could measure the turning of the ship with the thrusters, without the thrusters, on the rudders, check the stopping time, speed while going astern, etc etc. That will take us the better part of the month to do so. So for the coming ports, I will have an officer with a clipboard standing behind me, writing down it each setting that I make and then also noting down the result of that setting.

I do not like clipboard huggers very much but if it is all for a good cause than we will go for it. It will be interesting for the pilots to see this going on……………….

In the mean time it was a nice and sunny day. Now we were around the corner of the south point of Bahia de California which we call the cold cape for good reason; the temperature has dropped about 20 degrees from the mid to high 80’s to the low seventies. Tomorrow on arrival San Diego it should be in the high fifties but by 10 am. back up to the mid to high seventies. Also we are expecting no wind on arrival and that is always a nice way to start the day.

For those of you who would like to know more about the simulator, here is the link: http://www.csmartalmere.com/TourCsmart.aspx