With completely wind still weather we arrived at the pilot station, while the first signs of dawn could be seen in the East over the city. The pilot was waiting for us and with no other traffic around we sailed into the bay. Arriving at 0530 at the pilot station is a very good time as there is then seldom any Navy traffic around. The entrance channel is not that wide so if you can avoid traffic while going in , it makes life a lot easier. To sail into the bay, you are guided by a set of very strong green leading lights. They very accurately indicate if you are in the centre of the fairway our away from it. There is often a strong current running caused by ebb or flood, so the leading lights help you to recognize the drift. By 06.55 we were docked with the gangway out and officials stepping on board, for a scheduled arrival time of 0700. hrs. More perfectly I could not do it.

So the question is, what does a captain do during a changeover day. The answer is; as little as possible. Change over Day, is a very hectic affair for everybody on board. There will be a changeover of crew from 40 to sometimes 80 persons plus the guest clearance and disembarkation is going on. Luggage, stores and provisions are being moved. Fuel being bunkered, water loaded, cabins cleaned and everything is being set in motion for embarkation to start at 11.30. That means that everybody is performing at top capacity and doing extra work at the same time. The boarding crew cannot work until they have attended at the preliminary safety indoctrination classes, so the work of about 80 crew, has to be done by those who are not going on leave. During such a period nobody is needs a captain nosing around and interfering with things and thus I stay out. When they need me, they know where to find me. That is normally only when a problem arises and thus I also know that if I am not being called that then things must be running smoothly. 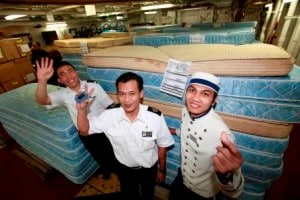 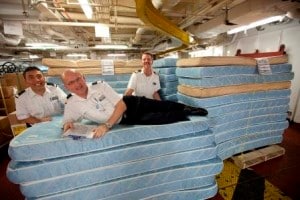 Housekeeping crew getting ready to offload the matrasses.

While the regular workload was already heavy enough to fill up the whole day, we had another thing going as well. We were receiving new matrasses for the cabins and the old ones are quite often still very good. The ship has a regular exchange program for soft furnishings to keep the high level of standards on board maintained. That means that we are always looking for places where we can donate items to. 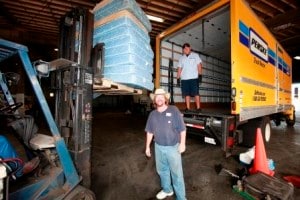 Although they are obsolete for a five star service that does not mean that they are not in a good condition anymore and that they should be thrown way. So we try to recycle by donating these matrasses to a good cause. 86 found their way today to the good cause of the San Diego Rescue Mission which sent a large truck to collect them all.

My changeover day was spent by filing paper work to complete the last cruise and reviewing the schedules of the various departments for the coming cruise. If I can iron out any conflicting issues before the cruise starts than we do not have to do any last minute adjustments. It is only in the late afternoon when things are heating up with late arriving stores and or guests that I might have to get involved and need to make a decision. Today the alarm bells went off at about 3 pm. when a flight from Tucson with 20 guests on board was delayed in departing and it was feared that they would not make it to the ship on time. Then suddenly all the eyes are on the captain with the question what is he going to do? Will he wait? For me the question is then, can I wait? When is the moment there that extra service to 20 guests becomes dis-service to 1200 other guests, as a too late the departure might mean a too late an arrival in the next port. Or do I have to burn so much fuel that it becomes much cheaper for the company to fly these guests on to the next port? Also have these guests booked flights and transfers through the company or did they make their own arrangements? A great help is here the internet. I always like to obtain independent information and thus I go to the airport website to see what the actual status of the plane is. In this case the plane was on schedule to land at 16.10 at San Diego. Averaging 30 minutes for deplaning and luggage, then a 15 minute cab ride, rush through the terminal etc. etc. my guess was that they could be on board by 17.15 at the latest. That made the decision easy enough, sailing 15 minutes late is not a big deal and there was no conflicting traffic in the bay at that time anyway, so we stayed. In the end all were on board by 1645 and I could still pull out at 1700 hrs.

Just on time as the pilot suddenly announced that a car carrier was scheduled for 1800 hrs. so if we could get out by that time, then there would be no congestion and he could just transfer from ship to ship. That worked out fine and by 18.15 we were out in open waters and on our way to the Mexican border. Our 14 day Eastbound Panama Canal cruise had commenced.