Today we left the Mexican coast behind and started crossing the Gulf of California. This is the body of water that forms the entrance to the Sea of Cortez located between the Californian Peninsula and the Mexican mainland. At noon time we had the Bahia de Banderas (entrance bay to Puerto Vallarta) on our starboard side and from then onwards we will not see any land anymore until we make our land fall at Cabo San Lucas around 0600 tomorrow morning. The weather continues to be the same, partly cloudy skies and hardly any wind. For tomorrow the weather forecast has changed a little bit, predicting a bit more wind from the NW, which will be good as it will keep the ship nicely behind the anchor and away from the beach. On our starboard side, although it is too far away to see, is an island group called the Tres Maria’s. They belong to Mexico and are far enough from the shore to be called remote. As a result the Mexican government has established a penal colony on the largest island and has issued a notice to shipping, advising all ships to stay away. Now it is never a good idea to get close to prisons in the first place but with a warning like that in the chart there is good reason to stay even further way. So definitely no sightseeing there.

Better to have a quiet day at sea. In the mean time I am fiddling around with the engine configuration and settings. You will see this topic popping up occasionally in the blog as it is becoming more and more a focus of the captain’s activities. The crystal ball gazers are convinced that the fuel prices will start to rise again in the near future, especially if North America and Northern Europe are facing a harsh winter; and thus every drop we can save helps from a financial point of view, let alone from an environmental point of view. With our diesel electric setup we bring more engines on line when more speed is needed. The exact speed needed is always difficult to predict due to wind, swell and current which all can increase or decrease the real speed of the ship. So in order to arrive on time, you always start with having a little bit of speed in hand. If the weather conditions are favorable, then eventually you switch one engine off and then still make it on time to the next destination. That is the simple part. Now we can also make substantial savings in fuel in the way we do that switching off. We call that the “dropping” of an engine. You can run the engines full out, and drop one, run full out on the remainder, and if needed to drop another one. 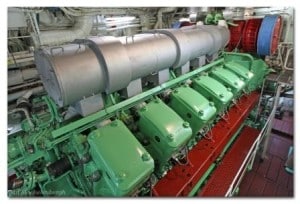 One of the Main engines of the Statendam. Photo courtesy: hotelmanager Bert van Macklenburgh.

However an engine is not always at its most economical when running full out. With our engines it is about 10% under the full load level. However this is not exact science and the test diagrams that we have for this do not always work out exactly in real life. As with each large engine plant there are always anomalies or issues with the complete system that makes things just a little different than what the theory says. So the Chief Engineer and I are trying things out. Especially on a day like this, with hardly any wind, only a little bit of current and a swell that hits us more sideways than head on, so we have a very steady ship, courtesy of the stabilizers. Although stabilizers reduce speed, thus cost more fuel but that is a constant factor in the equation and we can take that into account. So today we selected another engine load, compared to last time when the ship came up the coast here and tomorrow we can compare the 24 hr. figures. If the weather last time was not too dissimilar to today, and normally it is not, for the same time of the year, then we should get a good insight of what is working best. Then we know for the next time the average speed to maintain while running a certain engine configuration, to achieve the best result.

If a ton of Heavy Fuel oil is costing anywhere between 380 and 450 dollars, depending on where we are bunkering, then saving a few gallon here and there soon mounts up. It is an interesting jigsaw puzzle and it keeps both the bridge and the engine room teams happily occupied while standing their watches.

Tomorrow we will be in Cabo San Lucas and although we have the shortest port time from all the three ships in port, the Statendam has been assigned the outermost anchorage. That means that we have to run the longest tender service. I have obtained permission from the port authorities to stay on the engines, and drift in front of the port entrance until we have most of the guests ashore. As soon as the rush is over I can then drift to the anchorage.