Just after midnight I was back on the bridge for the crossing of this traffic intense area that I mentioned yesterday. It was not as busy as it could have been so we had very little to worry about. Still it was interesting to observe some of the antics of the other ships.  We observed two to the North us, agreeing on passing starboard to starboard, while they were already clearing port to port in fully open waters.  That meant that they decided to cross each other’s bow at a short distance and that is something that you normally try to avoid at all costs. Here we saw (on the radar screen) this maneuver carried out as if it was a routine exercise.  Of even more interest was the passing of two fast ferries next to us.  Fast means in this case, making speeds a lot higher than the 20 or 22 knots which is maximum of most of the faster merchant ships out there. We had one opposing ferry doing 26 and a ferry that was overtaking us doing 30 knots. They both passed to the south of us on opposite tracks, so their combined relative speed was 56 knots and that makes them move very fast in opposite directions over the radar screen, especially as we normally work with our radar screens on a setting of 6 and 12 miles for the plotting of other traffic.  With these speeds it is for the faster ship much easier to change course, then for the slower opposing vessel. That happened in this case as well.  The 30 knot Ferry had been approaching us from our starboard stern direction and knew that eventually we would change course to starboard and be in his way. So he made a wide turn to port and was gone before the other ferry came even close.  It gives a whole new dimension in running a large ship; it is just like a speed boat in this case. 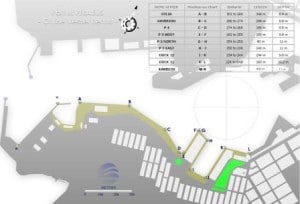 The main docks of Piraeus. We were docked at E-F where the green dot is located.  To the right were the large green area is, is the old cruise terminal, which is currently upgraded and will also feature underground parking. (Plan courtesy ISS shipping, our Athens agent)

Athens is surrounded by bays which shores are dotted with docks and industrial works. Piraeus itself is mainly the ferry & cruise port for Athens. All other traffic stays out of the main port and finds docks or anchorages in the surrounding area.  However every ship approaches the bay of Piraeus from the South and thus it can be a very busy area. To regulate traffic, they implemented the traffic lanes here. The Vessel Traffic Separation Schemes to keep the North and south bound traffic apart.  On top of that there is Piraeus port control which regulates all this traffic and approves if a ship can enter or not.  Although I had set my ETA for the pilot for 05.00 hrs to avoid most of the ferry traffic; it did not mean there were no ferries there. There were just less of them. Thus when you make the final approach to the entrance, Port Control directs you to the West, away from the main traffic lane.  There you can embark the pilot in a relatively safe position while the ferry’s can still enter and leave the port unhindered.  Once the all clear is given by port control the port can entered and the ship proceed towards the dock.  From the moment the pilot is onboard, until reaching the dock, it takes about 45 minutes.  As everything ran as planned this time, I was docked by 06.15 maybe early; but at least not late and with those ferries around I have seen otherwise. 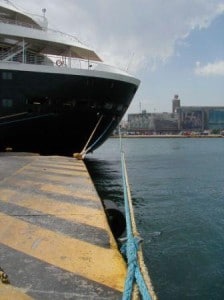 We just fitted in. The bulb of the Prinsendam was only a few feet away from the opposite dock forward with the nosing leaning over the dock itself.

The cruise ship docks in Piraeus were when constructed, large and spacious for the size ships then the norm.  Now with the cruise ships getting bigger and bigger, they are getting too short.  Even the Prinsendam which can be considered a smaller vessel nowadays, just fitted on the pier assigned, with the stern still sticking out. Next to us was the Splendor of the Seas, who with a length of 260 meters was overhanging considerably.  They constructed a new dock area to the West just inside the breakwater, as part of the preparation for the Olympic Games.  Large enough to dock the Queen Mary II (which was there during the Games as a hotel) but a long way from the Cruise Terminal.  So they run a shuttle bus service from all the cruise docks to the centre one, which is the one that we docked at.  Here the taxis are waiting on the forecourt and when you come back, this is where the port security check is and of course the obligatory Duty Free Store.  The Prinsendam guests did not need these shuttle buses as the main building was not more than 100 yards away from the ships gangway.

In the course of the day the weather “deviated” from the forecast and in the afternoon it started to cloud over.   We were sailing late as our next port is just around the corner, and thus we could enjoy Rain squalls with lighting over Athens.  When we pulled out at 23.00 hrs it was nearly dry, but even in the dark you could see heavy clouds at the horizon.  Tomorrow we are in Monevassia. This is a little village built upon a mountain which is only connected with the Nissos Peloponnesus through a cause way.  It as has an anchorage to the North and one to the South so that the mountain can shelter the ship from both North Easterly and South Westerly  winds.  I will need that tomorrow, as they are predicting wind force 5 and rain all day.