In the early morning I was woken up by the harsh sounds of crackling thunder over the ship, and when the bridge called me, the message was:  it does not look good.  Still we approached with hopes in our hearts, as Monevassia is basically a steep and wide mountain that offers good shelter on the lee side. Provided the wind is exactly under the right angle. And that you only find out by parking the ship at the anchorage. The wind and the accompanying rainy weather were all coming from the North East and thus I brought the ship to the South anchorage.  By 07.15 we were in position and I was not a happy camper. The wind just curved around the edge of the East side of the mountain, gusting between wind force 4 and 7 a bit more than the maximum five that had been forecast. However that was not the worst of my concerns.  While we had had a nearly windless day in Piraeus, it had been blowing here already for a while longer and the wind had managed to whip up the waves quite nicely. So nicely that long waves were running into the harbour and crashing against the inner breakwater of the Boulevard. Apart from the fact we would have a hassle with lowering and retrieving the tenders in those waves, we were also facing the problem of a very bumpy tender ride, to and from the port entrance.  Not a good prospect. 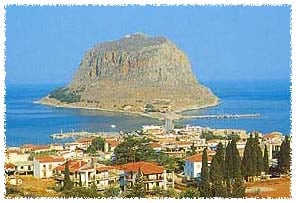 The mountain of Monemvassia in better weather. The ship can anchor on either side here, all depending on the wind. A long causeway is leading to a road up the hill towards the only entrance Gate of the walled city. (Picture googled from the internet)

However there is always hope and so I decided to hove to with the nose into the wind and observe the situation. Maybe things would change for the better after sunrise. The weather forecast was calling for steady NE winds and if that wind just shifted a little bit, than we might have a chance.  If not at once, then maybe later.  Nothing of the kind though. By 8 am the wind started to increase and that meant that also the waves were going to increase and the angle did not change. On top of it, it remained raining and it was turning into a really miserable day.  Not much reason for staying here. It was not safe to anchor in this wind, in 35 meters of water; it was not safe to lower the tenders and it was not safe to conduct a tender service.  So time to say good bye, and sail around the Peloponnesus in search of better weather. This large island/peninsula acts with its high mountains as a natural divide of the weather in West and the East of Greece. Those mountains should keep the rain on the east side and we should have better, at least dry, weather when passing the south side.

I always try to have an alternative port up my sleeve for a case like this, but there is nothing else nearby. Navplion is 60 miles to the North and had the same weather, and the nearest port on the better side of the mountain, Kalamata with its sheltered bay, could not be reached until 2 pm.  From there it would be at least 90 minutes by bus to get to Monemvassia.  So also not a workable option. (Provided that I would have received permission from the authorities in Kalamata to just pop up without having made prior arrangements)  The only option was a sea day. I think that for the guests is was a mixed blessing. Yes they missed this port but after two Turkish ports and full day of Acropolis in Piraeus, a sea day was not un-welcome.   This is a typical good weather port, as it is a long walk from the tender dock over a causeway up the mountain to the lower town. Then if you want to visit the upper town (abandoned in 1911) it is a very steep rocky path to get there.  Not something to do with wind force 7 and strong rains…

So we sailed around the south point of the island, and indeed as soon as we were clear of it the rains faded away and the sun came out. The strong winds remained but as we were sailing with them, there was only a wind force 2 to 3 that could be felt on the deck. For the remainder of the day, we will follow the coast line, albeit at a large distance, due to all the Capes sticking out and then early tomorrow morning we will arrive in Katakolon the west side of the Peloponnesus.

Weather forecast here, calls for showers, but no wind. So we will have no issues there. Good thing as well, as we will be in with 4 other cruise ships and that is a lot of people to disappoint.