I am always amazed at what other captains sometimes do with their ETA’s. When I send one, I try to stick with it and only weather and engine malfunctions will make me change it. Once you have set your ETA (Estimated Time of Arrival) then everybody involved, ashore and on the ship, starts planning accordingly. Deviate and you get delays and confusion. So in answer to the local agent’s instructions I brought my ETA forward to 06.15 so I could sail into port directly behind the Azamara Journey. My bridge team was prepped accordingly and kept a sharp lookout for all the cruise ships expected today; so that the Prinsendam could line up according to the sequence announced by the port authorities. However when I arrived on the bridge, the Azamara Journey, scheduled to be ahead of me, was nowhere to be seen. The Orient Queen, scheduled after me, was already going in. Not a problem as such but it always baffles my mind why this happens. The Orient Queen was scheduled to anchor and did so accordingly. However that meant that I had to sail around her, to enter the port. So all its guests got a very good look at the Prinsendam; as I had to sail by quite closely due to the shallows to the North. The captain of the OQ had of course anchored in the best spot for his tender service and that is right on top of the breakwater. 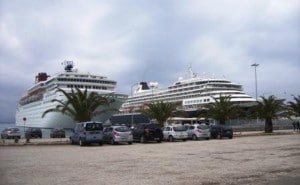 Ocean liner row Katakolon style. This picture was taken from the nearest souvenir shop on the water front.

The pilot hopped onboard while I was just turning around the Orient Queen and made it to the bridge while the ship entered the port area. There he pointed out where we were supposed to dock and I was glad that we were in full agreement. Best dock in the port, with the nose almost into the taverna’s. The pilot of Katakolon is a multipurpose man. He is the pilot, rents his pilot boat out as tender for anchoring cruise ships, owns the (compulsory) tugboat, has a restaurant and owns a local hotel. According to our onboard travel guru of many winters, Frank Buckingham, it is the best restaurant in the town and I can only agree. I normally do not go out for lunch very much but here I make an exception. Yesterday I had made a pre-warning announcement about this port and its docks as it smells. Sometimes quite badly. Under the water of the docking area is somewhere a crack in the core of the earth and through it sulfur gases bubble to the surface. Once out of the water it produces a smell that we identify as rotten eggs. If the wind is blowing the right way, you are lucky with a smell free day but most of the time it is being sucked into the Ventilation system and then the whole ship can enjoy it. Today was not different, although it was less potent than during our calls before. 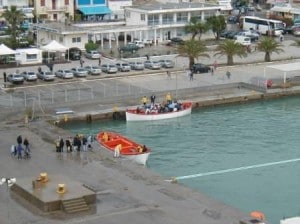 The Orient Queen tendered the old fashioned Greek way with open lifeboats. What was once a common sight in the days when the North Atlantic Passenger ships were sent cruising is now a thing of the past. Either the ships have dedicated tenders onboard, or they dock. The Orient Queen is the old Starward of 1968 and in those days open lifeboats were still standard. For some reason; later owners of the ship, never invested in tenders and hence we saw a trip down memory lane here today. At least for my wife; remembering her days when she sailed on the old Orpheus of Epirotiki. A pity that it rained for most of the day…………. Still the ship is a part of cruising history, as with her sisters she was one of the first real cruise ships sailing out of Miami in the late 1960’s. The Azamara Journey popped up around 07.30 and then we had to wait a few hours for the Astor which also had to anchor. So a busy day for Katakolon but as the ships visiting were not that big (at least to current standards) still 5000 guests, not counting crew is quite a few for this small town. Luckily most guests were on the tours to Olympia and other Greek antiquities and that meant that there was still ample space in the restaurants.

Also Katakolon is going up in the world and most restaurants are now offering free WI-FI. Hence we could see a large number of the crew taking advantage of that possibility and with a cup of coffee and a slice of Baklava sitting behind their laptops. We have WIFI onboard of course, but free is better…………… We sailed on time and managed to get out just before the Zenith. Departure is a 15 minute affair due to the deep sea part of the port being only twice the length of our dock. Once past the Astor we set sail on a South Westerly course that should bring us near Sicily by tomorrow morning. We will spend a restful day at sea, however Kate and Wills have graciously consented to schedule their wedding on our sea day, so the guests can enjoy that happening.

Tomorrow the Showroom at Sea will be turned into a Royal venue with the whole wedding transmitted on the big screen.