Today is our first day of that long haul all the way along the West side of Africa. The area that we are now in, close to the equator, is known to sailors as the Doldrums. 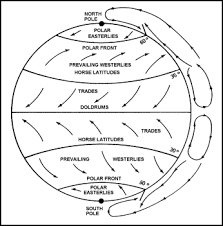 The area of very little wind.  It is caught between two area’s of trade winds and as a result there is basically “no wind left” to blow here. And indeed outside there is hardly more than about 3 knots of wind blowing. We call that a light Air.  It is almost always the same here and in the old days sailing ships could float here in becalmed weather for weeks, causing food and water to run out and scurvy to set in. Not nice at all. That was also one of the reasons for steamship companies to be very quickly established to Africa as well.  The North Atlantic was the first as the steamships reduced the crossing time (here mostly due to too much wind = bad weather) from six weeks down to 14 days, but this was quickly followed by routes to West Africa. Especially the British were very active here. There was a Dutch company as well but it was never very prominent. The Belgians had a much larger presence in this area as they owned the Belgian Congo.  A good second were the Portuguese who had the colonies Angola and Mozambique. The name Doldrum is 19th. Century and means dullard which in those days was a sluggish fellow.

Another piece of interest that surfaced today and had the guests focusing on was the volcano eruption in Cape Verdes. Everybody was at once concerned about having to cancel yet another port but there was no reason for alarm. The Cape Verdes are full of volcanos and this one has its own island. Basically the island of Fugo is the Volcano. There are houses scattered all over the mountain slope and there is a little town but it is all up and against the cone of the Volcano. Thus there is no point of refuge on the island and hence the call has gone out to evacuate everybody to one of the other islands. We will see the island on our portside when leaving the port of Praia. There is about 33 miles between the islands and if the Volcano is really active we should be able to see something as long as it is safe to sail by. It is not a good idea to be in the area when it starts raining pumice so we have to careful.

The land area under the sea is called the Angola Basin and the sea reaches depths up to about 5000 meters. Then it stays that deep (give or take a 1000 feet) until the ocean floor climbing again near the Mid Atlantic ridge. Above it the water swirls around quite nicely. The ship is now coming under the influence of the South Equatorial Counter Current which is part of that mid Atlantic rotating current system which I mentioned the other day. It flows from West to East along the Equator and when nearing the African coast takes on the name of Angola current. It then follows the coast a little bit to the south before it turns west again. While going west it gets a little push from the Benguella current, which brings cold water up from the Cape area.

The SEC Current is thus pushing the ship to the East but luckily not full onto the bow and hence the ship does not lose too much speed. The deck officers only have to steer for drift to counteract this push in order to stay on the course line.  Although one would think that we are in the middle of nowhere here, this is not the case, as all the ships that are heading to or coming from Cape of Good Hope near Cape Town are on nearly the same courses as the Rotterdam.  Today we saw traffic that was related to the oil offshore industry and liner service to the ports on the South West coast of Africa but by late tomorrow afternoon we should see Tanker traffic going to and from the Persian Gulf. For these large tankers it is economically worth while to sail all the way around Africa and not to go through the Suez Canal. Although some of them are (still) too large to transit the Canal that might change in the near future as Egypt is going to build a new Canal parallel to the old one with the hope of attracting more traffic and also larger ships.

Tomorrow will be our second day at sea and we will be coming closer and closer to the Equator.