Slowly but steadily we are nearing the equator but what is more exciting is also the Greenwich meridian. The captain is going to attempt to get 00.00 N/S & 000.00 W/E on the GPS so that the ship is exactly on the equator and the zero Meridian at the same time. Getting to the main zeros is not so difficult but getting to ALL the zeros is extremely difficult. It means that the navigation team has to get the GPS antenna within 3 feet of the crossing of the two imaginary lines.  Thus 800+ feet of ship has to sail within three feet of accuracy to get the magic number.  So I am keeping my fingers crossed. I managed with my own ship the 00.00 Equator once but I have never gotten the chance to go for the “All around zero”. For a navigator this is exciting stuff as it goes beyond the regular pin point navigation. 3 feet is hard to achieve and we do not get a 2nd chance. It is not as if we can turn the ship around and try it one more time. Today we are 3 degrees south of the equator so we are not there yet. Expected time is approx. three o’clock tomorrow afternoon and the Cruise Director has planned a special party on the Lido Deck for this “once in a life time event”. He might be right there because the chance that somebody will make another cruise that follows the same cruise track is fairly slim. Plus it is Thanks Giving tomorrow for our American Guests and that could make it even more special.

For us the school class life goes on below decks. The 13 trainee’s in the group spend their day partly together and partly split up.  In the morning it was your’s truly who discussed the company’s fire fighting doctrines and the need to stick to the protocols when going through a fire evolution and later on the navigators got immersed in sprinkler systems and the engineers in something highly technical and complicated in the engine room.

Nowadays all ships have sprinklers systems. Those little nozzles that stick out of the ceiling in your cabin with the little warning on it: “Do not hang articles from sprinkler heads”.  Each nozzle has a little colored break glass that will crack if the room temperature goes up too high; which then normally indicates that the cabin is on fire.  Many a cruise 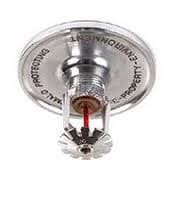 One of the many types out there. The red glass will burst if the temperature goes above 68oC

ship fire has been extinguished before it became a real problem by means of this system. There are several variations on this system, such as Hi-Fog etc. depending on how fine the droplets are that are being dispersed from the nozzle.  Whatever the system that is in use and we have several onboard our ships, it is extremely important to know how this life-saver exactly works and how to deal with it.

If somebody would knock a glass out of the nozzle then 9 bar of pressurized water comes spouting out. That is a lot of water. In that case we all run to close the valve. A: to prevent the cabin from total flooding (and mostly also the whole neighborhood as it is an awful lot of water that comes out) and B. to prevent seawater from coming into the lines. Once the glass has been broken the water flows out. That causes a pressure drop and that starts a pump. The water in the sprinkler lines/pipes is fresh water to prevent the pipes from rusting. That water sits in a pressurized tank. As soon as the water starts flowing that fresh water is very quickly pushed out of that tank and towards the location of the broken nozzle. Then automatically a pump starts and that pump supplies salt water to keep the extinguishing going until we stop it. We do not like that salt water in the pipes so as soon as the fire is out, or if there is not fire but a broken glass we we want to close the section valve even faster. Everybody has to know the location of the section valves (39 in this ship) and how to deal with them. That took up most of the afternoon as my colleague also included an engine room tour. 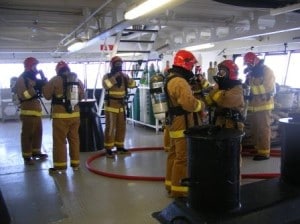 Dress up. Check your partner to ensure that there is no exposed skin.

In the mean time I prepared a little fire hose training. Most deck and engine officers will be part of the fire fighting squads eventually and the earlier we start the training the better it is.  Apart from the regular hose control exercises I also let them do the soccer game. The objective is trying to push a large ball into two goals by means of a fire hose handled by two opposing teams. That is nearly impossible due to the pressure on the water jet but it is a good excuse to get each other soaking wet. And thus it happened.  A very happy but extremely wet group of trainee’s finished another fruitful day at sea. 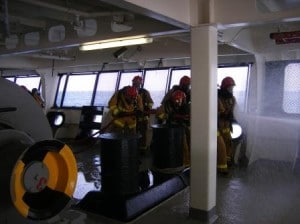 Two hose attack. One for protection the other to fight the fire.