As you can understand, the ship was not letting this pass by without it being properly celebrated. Hence the plan of just sailing over the mark was not going to happen. The ship had to be stopped to make it possible for all the guests to get “on the mark”. King Neptune was invited and the Cruise director grabbed the chance to throw a party.

I was a bit disappointed in King Neptune. You would expect that if he and his better half were invited to come to the ms Rotterdam he would arrange for perfect weather. Well the sun did shine but also the wind did blow. We are officially not yet out of the doldrums but it seems that the doldrums had decided to take a break as it was blowing up to 30 knots. That made it a lot more difficult for the captain to get the ship on the spot and to keep it there. Thus I am disappointed in King Neptune as I had expected better from him.

To make it even more complicated it was decided that the zero position should not be on the bridge but in the Lido pool making it possible for all the festivities to take place right on Point Zero.  This meant that it had to be calculated how much the bridge had to be north of the Equator to get the Zero – Zero exactly in the Lido Pool. Once that was achieved the ship had to be kept there for 45 minutes while all the fun took place in the pool area. Together with the North Equatorial Current pushing the ship to the East and the strong winds pushing the ship to the North West it made the whole affair a challenge to say the least. 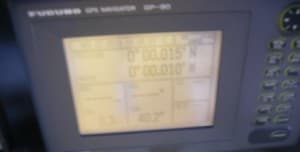 We are there. The Lido pool is about 30 meters aft of the GPS antenna and to sb. hence the numbers not being zero.

However, what the Cruise Director wants, the Captain shall deliver and thus it was done. Not as easy as everybody had hoped for, as the wind tried to keep pushing the ship to the North West but by using all the maneuvering capabilities of the Rotterdam, the “Zero” was kept in the pool. 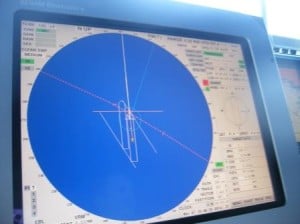 How they did it. Put the bow in the calculated position, have a blue circle on the pool location and then watch the predictor (2nd ship’s layout on the screen). As long as the predictor stays on top of the ship, the ship maintains position.

On deck other things were happening:

First King Neptune and his Queen popped up and were parked in the orchestra booth so everybody could see him & her and after he granted “ safe passage” (although a windy one) to all on board, we had a little show featuring a cultural aspect from each of the four quadrants.  Russian Dancers represented the North, Indian Dancers the East, the South was represented by South African paintings and local music and the West by Argentine Tango dancers.

For those who were more into Alcohol than Culture, the Beverage Department had created 4 special drinks commemorating each quadrant to enhance the party atmosphere and indeed some guests did look very happy indeed.

By 16.00 hrs. the good ship Rotterdam was on its way again continuing on a North Westerly course towards the Cape Verdes. We are almost halfway now, so we still have a few glorious days at sea to enjoy.

Barely an hour after we left Point Zero, the wind fell completely away. The doldrums were back from their break. We could have done with that wind still weather while we were at Point Zero. King Neptune will have some explaining to do when he steps onboard next time.

HAPPY THANKS GIVING TO ALL MY AMERICAN READERS.