I enjoy overnight stays as it gives me a chance to catch up with some sleep and to square away paper work and emails that somehow were left outstanding. When a cruise ship becomes a static hotel, it virtually runs by itself as there are no influences from sailing and variable time schedules involved. This was our port to fill up the ship for the next cruise and in the course of the day and evening we loaded 1400 tons of fuel. That will last us for the next 14 days and even longer if the average speeds are not that high. St. Petersburg fuel is about $ 50,— cheaper than some of the other ports, so all the ships that can, will fill up here.

We left at the good hour of 6 pm. the moment the last tour returned to the ship. This time we had the wind on the stern, so while complying with the maximum speed on the engines to avoid wake, we got an extra knot of speed for free and that resulted in doing the passage 30 minutes faster than inbound. The highlight of this transfer is the passing of Kronstadt, the old imperial navy base and later the head quarters of the Russian Baltic Fleet. When I came here the first time in 1993, we had guards onboard to avoid picture taking when passing. When I came by in 2001, the whole yard was full of derelict and or laid up navy ships. This time as mentioned yesterday it was much better. There were not that many ships there anymore, although still a few tugboats (?) half sunk. 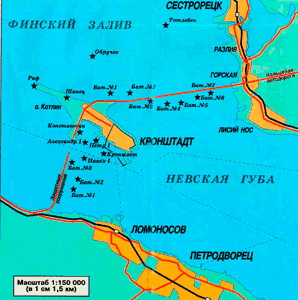 The largest ships observed were the 210, the 30 and 1182 for those of you interested in naval stuff. What drew my attention, as it looked just like a small passenger ship, was the
Admiral Vladimirsky. As I had never heard about that one, I doubted if it was a passenger ship but with so many portholes in the sides it had to be something to carry a larger number of people onboard. Google to the rescue; and it turned out that this was a scientific exploration ship named after Admiral Valdimirsky. (1903 – 1973) Its main activities seem to have been to do with radio and sound waves. The Admiral after whom the ship was named was head of the Baltic fleet during the 2nd world war and later Admiral Inspector of the main Russian forces.

When passing the flood barrier I managed to pry some information out of our pilot, whose last name was Gorbadchov (I am not making this up…………) he said that it was expected that the barrier would be operational by the end of this year. There were also plans to build a tunnel under the flood barrier, a project that had come to a halt during the change over instigated by another Gorbadchov. Now it is on the schedule to complete this tunnel. If and when completed, St. Petersburg will have a complete outer ring road connecting the Southern suburbs with the Northern ones, without the traffic having the need to travel through the city. This would be a good thing as traffic in St. Petersburg has become so horrendous that it greatly affects our tours. The city tour used to travel down Nevsky Prospect the main shopping street in the city which is nowadays on par with shopper’s paradises such as Regent Street, and Fifth Avenue. Now with the traffic jams, the tour operators try to avoid this street as much as possible. Understandable but a pity as it is very interesting to observe High Commerce the Russian way.

We disembarked the pilot around 20.30 hrs. and then set sail towards Tallin in Estonia where we will be all day tomorrow. Tallinn has had for the last few years a dedicated cruise pier and that means that most cruise ships do not have to dock in the cargo and ferry port anymore. We will be in port tomorrow with the Island Sky (ex Renaissance VII, the smaller version that they first built) but they will be docking in the cargo port, mainly because their exit doors are too low for the new pier that we are going to. The old town of Tallinn is very well preserved and surrounded by a city wall and really well worth visiting. No doubt it will be a hit with our guests.

The weather tomorrow is forecasted to be sunny with temperatures close to 80oF or maybe even more, but in the afternoon a lot of wind is expected so I might need a tugboat for departure, we will see.