With the sun hardly setting, we approached the pilot station at 0400 hrs. more or less in the day light. Dusk and dawn faded into each other and real night never came. The pilot system in St. Petersburg is basically as it was in Holland for hundreds of years. A big mother ship for the pilot to stay on and a smaller boat for the transfer. It is not amazing that it is comparable to the Netherlands as it was probably copied from there a long time ago. In the 17th century Czar Peter the Great came to Holland to study shipbuilding as he wanted his Russia to have a large fleet that would dominate the Baltic. When he went back he took all the Dutch maritime knowledge with him. As a result the names for the sails and the rigging on the Russian training ships are basically the same as the Dutch ones. Also the pilot, in Dutch Loods is called Lootsenman, starboard is starrebord (after Dutch stuurboord) and portside is bakkebord (Dutch bakboord) and there are many more similarities.

Thus we approached this area of positive Dutch influence and proceeded up the dredged channel. The waters around the St. Petersburg are very shallow and thus we sailed for 3 hours at slow speed (to avoid squat) towards the berth. Somewhere behind us was another Dutch ship, the warship Johan de Witt which was visiting the city as well. About 45 minutes in, the ship passed Kronstadt which used to be the old Russian Imperial navy base. For years it was neglected but this time we saw a large new building being erected and a lot less derelict navy ships than a few years before. St Petersburg does not have much elevation so there is the constant danger of flooding and in front of Kronstadt large flood barriers are being built, with massive gates that can close the entrance that we were now using to sail through towards the port.

We were assigned a berth in the new cruise port, called the Marine Façade. It is located north of the commercial port where we had to dock in the past with all the hindrance, dust and noise from the cargo ships at the other berths. The Marine Façade is only partially ready and will eventually comprise and complete new a high rise area around it. For the time being two berths out of five are being used for cruise ships which will eventually increase to five. There is a new terminal for the guests to walk through and they are even dreaming of one day becoming a change over port for Baltic Cruises. 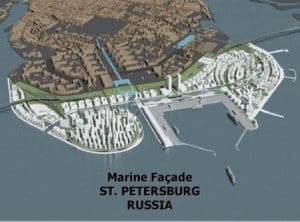 The plan for the new cruise terminal when fully finished. Currently all the high rises around the docks still have to be built.

For me it was great to dock here. Good bollards, a nice pier height, smooth pier surface and a very wide centre area to swing the ship around in for docking. It is still very exposed to wind but when the high rise buildings are there, it will be a nice sheltered area. While going in we had a whole traffic jam of ships going out. Some of them all with the same name; just with a different number. In real USSR style they built ships in large numbers to comply with the 5 year planning then going on. So we passed the Volga-Balt 217 and a few other types with equally high numbers. They sailed just outside the channel as their lesser draft allowed them to.

We were nicely docked by 06.40 for an official arrival time of 0700 hrs. After some confusion with immigration (they asked for another immigration card to be filled out by all guests, a requirement not previously announced) we could send the first tours ashore for two full days in the city and beyond. 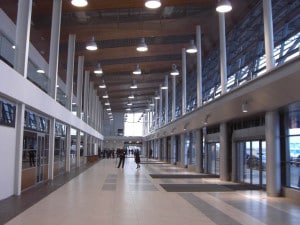 The inside of the new terminal, the main throughfare from the ship to the tour buses.

We are going to spend an overnight here, to enable evening tours to the ballet and folkloristic shows.