Helsinki has several cruise terminals spread over the city. Most of them are near the South harbour and used for the smaller ships. The larger ships are normally delegated to a terminal further out (West Harbour) where you need a shuttle service to get to town. So it pays off again to be a smaller ship as we were docking in the South Harbour together with the Regatta which is about the same size. The Norwegian Jewel and Seven Seas Voyager were at the West harbour. The rest of the South Harbour was taken up by ferries; at one moment four at the same time, that kept coming and going throughout the day. We arrived under glorious sunshine at cruise dock ERA and after the normal “discussions” with the linesmen about the location (this time there was at least 7 feet in the meter for positioning) we were parked happily for the day. 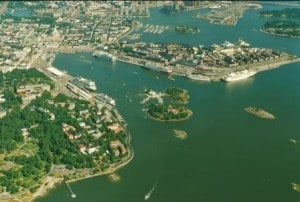 The ship docked at the corner where the white little cruise ship is located.

Helsinki is safety tucked away behind numerous islands and even more shoals and rocky outcroppings. While the whole Baltic is very shallow, the closer you get to the port the worse it gets. Thus the approach to Helsinki is very well marked with concrete towers and pylons. The main entrance to the port area is a very narrow gap between rocks and is guarded at both sides by fortifications. I do not know if Helsinki was ever successfully attacked from the sea side but if it was, then the attackers must have had a very hard time doing so. It looks very secure. As there is not much room to spare when going through, all focus is on the helmsman while we go through the hole. One misunderstanding of the pilot, one delay in reacting and the ship crashes into these fortifications. That does not happen very often I have been told but both the inbound and outbound pilot were very happy with the steering quality of my quartermasters and with the way the Prinsendam reacted to each course change. 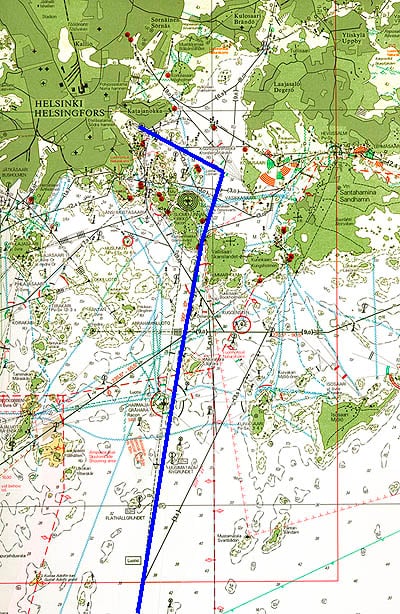 The course through the hole……….

Due to the new security rules it is not as straight forward to walk to town anymore as it used to be. In the past you could just cross the ferry terminal and be at the downtown market in about 10 minutes. Now a steel fence has been erected around the ferry terminal and you have to walk all around. A clever somebody has built a tax free store right at the gate entrance to the ferry terminal and catches eager shoppers from the ferries and the cruise ships at the same time.

But the harbour is very sheltered and that gives an excellent opportunity for lifeboat drills for the crew. Most crew are in life rafts and only those assigned to boat handling are in lifeboats. All the guests onboard have a seat in a lifeboat, mainly because it is much more comfortable than sitting in a life raft. There is no legal objection against having guests in a life raft but it is preferable not to do so. A sturdy lifeboat is a bit more comfortable than a bobbing balloon. I am normally the first one mustering at my life raft station, for the reason of setting the example, and it is always funny to see the reaction of the guests onboard when they see me walking by in a lifejacket. A captain in a lifejacket sets all sorts of alarm bells off, even when the ship is safely docked.

Today all the lifeboats were going into the water for exercising and the members of the life rafts got instruction in the contents of the raft. Sea anchor, food and water rations, signaling devices, the air pump etc etc. How to repair a leak, the use of sea-sick tablets, when to drink and when not. Today the cadet had to give the instruction as part of her training and she did a very good job.

We sailed at 18.30 from the dock and as the longest day of the day was only two days ago, it was as if it was mid day. The sun was still beating down on the port. Because we sailed with the sun in the back, the guests had a great view of the scenery of the harbour while we made our exit through the same tight hole again. Tomorrow we are in St.Petersburg and we are going to the new cruise terminal and that is a new one for me.