After our wobbly evening in the entrance of the Rio de la Plata we turned north just after 1 am and from then on we had following seas. The Prinsendam made a knot more extra speed courtesy of the wind blowing in the stern and apart from the occasionally pitching movement the ship was riding the waves in a very steady way. Still the combined swell and wave heights were considerable and I had the opportunity to point that out to the guests today how much they can make a ship move. About three miles on our port side there was a car carrier coming south; the Franconia owned by K lines of Japan. As car carriers are extremely boxy they can come very close to a passenger ship in volume and with a similar draft. This ship was going the opposite way and it had to pound against the swell and wind. It resulted in some very heavy pitching with the bow coming fully out of the water and when the bow went down the propellers did the same. A sight you normally never see so it was worthwhile to have a look at and to understand that even a big ship is only a small toy in the big ocean.

Now we are back from the Southern end of the world we are coming under the influence of regular weather and current patterns again. From the Falklands we were pushed North by the Falklands current which gives about 1.5 knots of extra speed, as long as the ship sailed on the edge of the deep/shallow water line. The deep ocean current churns along this edge and that results in an increased velocity of the water. I tried to take advantage of that all the way to the Rio de la Plata but had to leave it behind during the last afternoon and evening at sea. Then we had to go over the shallows and leave deep water behind in order to get to the estuary of the river. 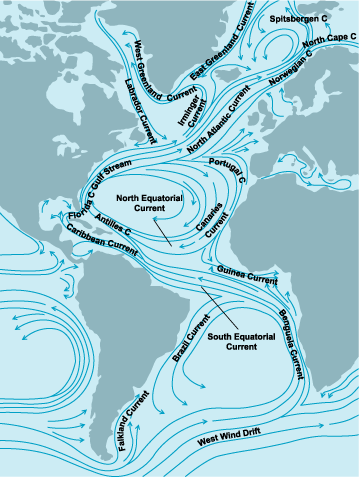 Courtesy; unknown source on the internet.

Since we have turned north we are sailing against the Brazil current. This is an extension of the South Equatorial Current which comes across the South Atlantic Ocean from the coast of Africa. When it nears the Brazilian coast it splits in two. The main part goes north along the coast of Guyana and the south part receives the name of Brazil current and runs south along the Brazilian coast towards Uruguay. There is meets the Falklands current, merges with it and then turns East again across the ocean towards Africa. Etc etc.

For the coming days, until we start to follow the Brazilian coast towards the North West, we will have this current against us. Thus far its influence has been compensated by the following wind that we have. Just before we reach Rio de Janeiro we should be out of it temporarily as Rio is located in a curve of the South American continent and the Brazil current follows the main contours of the coast.

For short journeys, currents are not something that you pay much attention to, as you simply have to follow a course to get from A to B. However when you make an ocean crossing for 5 to 10 days, it is really worthwhile to figure out if a longer track might not save time, when planning that track through a favourable current. A free knot of speed saves 24 miles in a day and during a five day crossing that would be over a 100 miles or at least 5 hours steaming at full speed. When we sail from Puerto Rico, the strength of the current apart from the expected weather is a major part of the decision making process whether we go north of the Bahamas (10 miles shorter) or North of Cuba where the current is normally stronger. That is something that I will closely look at by the time we arrive in Ponce on March 21st.

In the meantime we had a nice sunny day, with pleasant weather on the outside decks. Tomorrow we have our 2nd sea day before we start port hopping along the Brazilian coast